After upgrading to Ubuntu 16.04, I tried to use the new software center that came along with it, but I found it to have a few issues. One, it didn't detect all the applications I had previously installed and two, whenever I tried installing new software with it, a new icon on the launcher (saying "Waiting to Install") appears, but no progress is made and the icon is stuck on the launcher.

However, I don't encounter any of these issues in the older Software Center. Does anybody know why this may be? 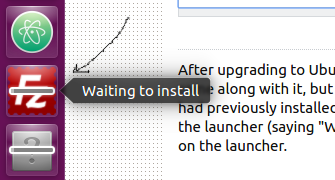 Try installing the old software-center from the commandline:

I resolved this same issue using 'check for updates' thru the 'About this Computer'-->'Details' menu found thru the top right menu area of the desktop.

Not the answer you're looking for? Browse other questions tagged software-center 16.04 or ask your own question.