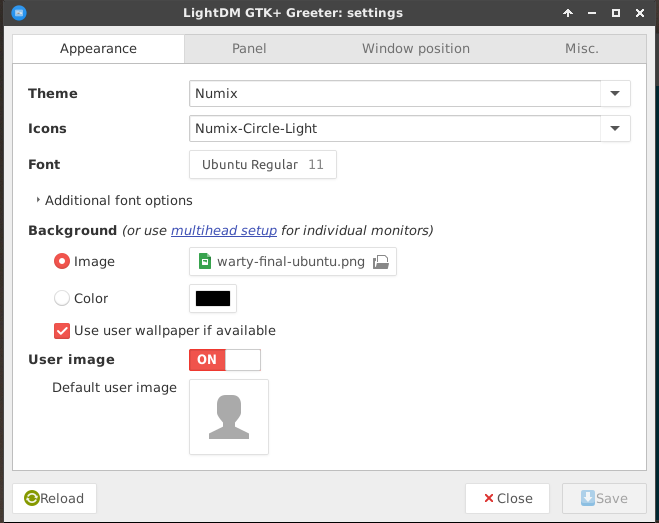 0
Restore Slick Greeter in Budgie?
0
ubuntu power button?
296
How to fix "The system is running in low-graphics mode" error?
6
How to change login screen
6
Lightdm-too many desktop envirements
4
How to show avatar and username (not only full name) on the login screen?
1
After installing KDE desktop only KDE login
2
How to select lightdm greeter theme or appearance?
2
What is the default lock screen for Ubuntu 16.04
1
Where are the login screen images stored on the HD
See more linked questions

13
How do I set my own (HTML) theme in LightDM?
20
How do I add customized wallpapers so they appear in the dynamic unity greeter?
0
Lightdm-gtk-greeter's background wallpaper is distorted in Ubuntu 12.04 (How I can correct background wallpaper errors in "lightdm-gtk-greeter"?
0
How can I change the Kubuntu background from default?
1
Cannot change GTK and icon after changing LightDM greeter
2
configure lightdm greeter in ubuntu 14.04
2
LightDm does not have permission to read path (xubuntu Greeter Settings)
5
Lightdm greeter - theming of option-button
1
Why doesn't my theme show up in LightDm Greeter?