Send event on global keypress - have a listener in terminal react and run another program?

Ok, this is my problem: I have an application I want to screenshot; but because gnome-screenshot and mate-screenshot hide toolbars or whatnot each time they take a screenshot when started from the interactive applet window, they mess up the window of the application I'm screenshotting, which then crashes. The only thing I can do is start gnome-screenshot directly with a file name and a delay, which makes this process rather tedious.

So, this is what I'm thinking of doing - I can set up a global keypress listener via System/Keyboard Shortcuts": 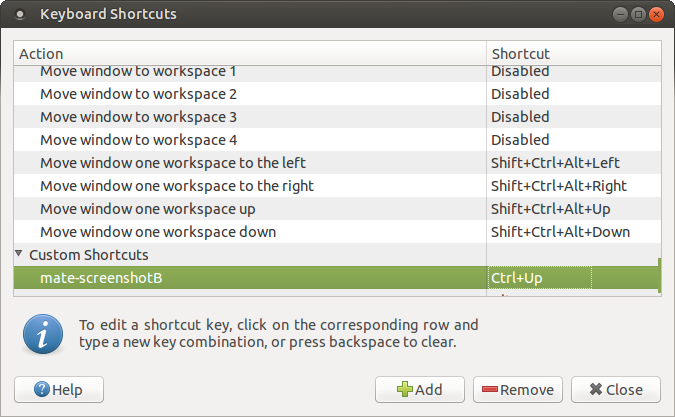 This could trigger some program, which sends some sort of a global "signal" if you will (possibly a TCP/IP packet or something).

Then, I could have a "listener" script in an open terminal, which reacts to the signal (in a sense, netcat could be set up as a listening server, reacting to an incoming TCP/IP data, and then filter the reaction via grep or something), and in response, runs gnome-screenshot -d 10 -f ~/Desktop/test.png. As a simple example with netcat:

The question is - are there any applications that I could use for sending this event globally, and listening and filtering for it in a terminal? I'd like to know if there is something like this avoiding network, before I try to develop my own custom netcat based scripting solution...

Ok, made this with netcat, but hoping someone will post a better solution:

Not the answer you're looking for? Browse other questions tagged command-line gnome shortcut-keys or ask your own question.

3
IM message indicator in gnome-shell
6
How can I programatically show/hide my app window with global shortcut key?
0
Make a program run in a terminal
0
notify-send and terminal command
0
Send Unicde “Clear Key” to GUI program on keypress
2
“Always on Top” disabled for maximized windows
8
disable global app menu in Ubuntu 19.04