chmod not working in a non super user

I have created a file named *.txt in /home using following command:

Then I have changed owner of *.txt to a user that I've created:

I login to ABC by typing:

I tried to change permission of the file:

This is the result:

ABC is not in the sudoers file. This incident will be reported.

Permissions have successfully changed when running chmod from the original user: batman.

How can I change the permissions of *.txt from the new owner? 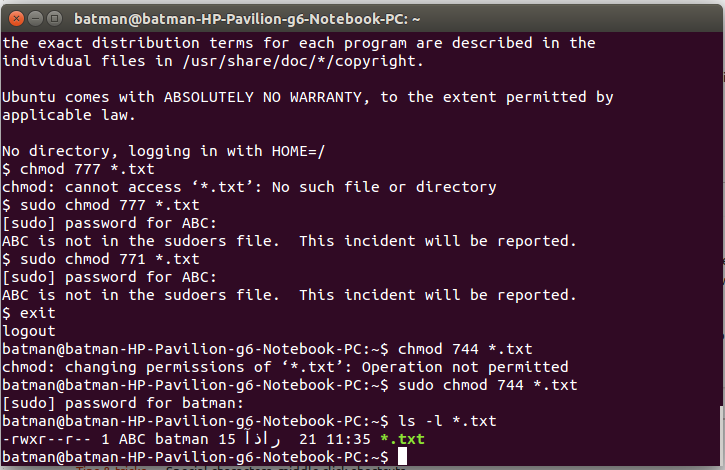 All I need to do is to be in the directory which contains the file. Solution:

That's all. But be aware to change the name of the file because the * in *.txt isn't a valid name.

If you step through your commands and the output these are your problems.

The file *.txt is located in batman's home directory.

5
chown: changing ownership of ` ': Operation not permitted
0
Having trouble with chmod
0
Hard drive (hfsplus) will not allow me to chown or chmod
2
Why isn't another member of a group able to use a directory?
3
chmod: Everything on SD Card Stuck On 755, Owner is Root
0
Unable to change file and folder owner and permission from root to other users ( Ubunto 20.4)