How can I add a dynamic, application specific quicklist for recently used files to the Unity Launcher?

It would be an awesome feature to access recently used documents from LibreOffice with a dynamic quicklist in the launcher. There is quite some experience on how to create custom static quicklists.

But is anyone out there who might give some constructive orientation on how to build a dynamic quicklist for recently used docs in lo?

The Ubuntu wiki has a very brief description on how to create quicklists with python or vala. I am not experienced in either of the two and I did not find comprehensive example scripts for dynamic quicklists out there. Therefore I'm looking for some easier way to implement it or somebody who has already done/seen it.

The full integration of an application with the mentioned dynamic quicklist -entries most likely needs to be done from inside of the application. After all, the most direct information on used files comes from the application itself.

However, since editing the source code is outside the scope of what we're doing, that would not be the road to take.

That doesn't mean we cannot achieve pretty much exactly the same result, maybe even in a more flexible and general way, from "outside". All the information we need is available in the dynamically updated file: ~/.local/share/recently-used.xbel, from which we can retrieve the complete history of opened files, the corresponding date & time information and the application that was used.

Furthermore, to add a dynamically updated section to a launcher can very well be done as part of the "traditional" (static) section. The key of the solution is then to create a process that takes care of the above actions without adding a noticeable burden to your system.
As mentioned in the link from the question, some background process would be needed anyway to keep track of the changes and pass the instructions.

The script below is pretty much doing exactly that.

The solution; a background script

The values in the script below are specifically set for LibreOffice and its documents. Without any editing, it can be used to add a recently used -section to the LibreOffice-Writerlauncher. It will show the last 10 used documents, opened by any of the LibreOffice -modules.

The solution can however be used to add a "recently used" section to many applicatiosn with a .desktop file in /usr/share/applications. Since the file ~/.local/share/recently-used.xbel is Gtk related, most likely, applications with a Gtk window will be our potential candidates (that is, if the application opens and edits files). Furthermore, the number of files to show is arbitrary.

The solution adds a section to the targeted launcher in the Unity launcher, showing an arbitrary number of recently used files, e.g.:

Assuming you have LibreOffice preinstalled (the downloaded version does not have a referring .desktop file in /usr/share/applications which is needed by the script, but somewhere else, please mention if you need to setup the separately downloaded LO version)

To use it on other applications

As mentioned, you can easily use the script to add a dynamic "recently used" section to other application's launcher(s). To do so, see the gedit example setting for the head section of the script: 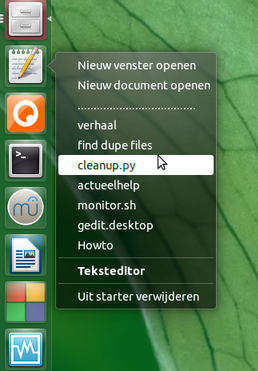 I could notice nor measure any additional load to my system, running the script in the background.

How to restore the original launcher

Simply remove the local copy of the launcher in ~/.local/share/applications

Some major improvements were just made:

Not the answer you're looking for? Browse other questions tagged unity launcher libreoffice .desktop quicklists or ask your own question.

138
What Custom Launchers and Unity Quicklists are available?
7
Is it possible to add a quicklist to the Libreoffice Writer icon in the Launcher showing my most recently opened documents?
6
Is there an indicator to quickly access recently used files?
6
submenu items in Unity launcher dynamic quicklist

7
Is it possible to add a quicklist to the Libreoffice Writer icon in the Launcher showing my most recently opened documents?
6
How do I create a dynamic quicklist for the home folder?
6
How to get a list of currently open files / application instances in unity launcher quicklist?
5
How can I remove or disable “Unlock from launcher” in the Quicklist of a Launcher-Icon?
0
Commands for quicklists
16
How can I add folder shortcuts to the Launcher?
0
how can I create office documents without particular extension?
2
How can I combine application launchers into one launcher icon?
6
submenu items in Unity launcher dynamic quicklist