How do I set up remote desktop?

I have some user accounts in my Ubuntu 10.04 and I want them to login from all over the world and access their data using Internet and of course I want any of my users to be able to access only their own user and to be able to change data.

What should I do? Are there any remote desktop apps?

The feature is already installed on your Ubuntu. The "server" can be configured in System/Preferences/Remote Desktop, whereas the "client" is in Applications/Internet/Terminal Server Client. 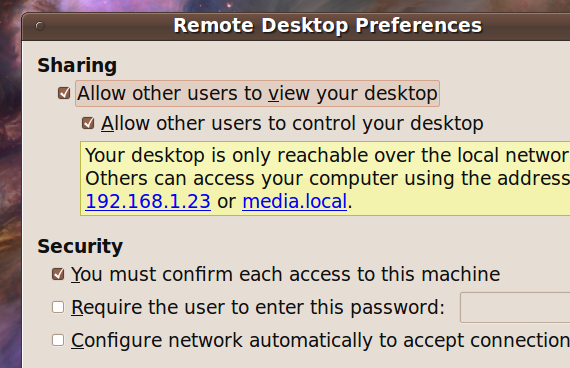 A blog entry explain this better than I can: http://www.makeuseof.com/tag/ubuntu-remote-desktop-builtin-vnc-compatible-dead-easy/

As far as I can see, none of the answers posted so far actually implement user-based security, they simply allow access to a running X session. This page talks about how to launch the X windows manager (or login handler) over the internet. This way, the only application user gets access to is the login screen, just as they would if they were sitting at the local terminal.

You can use VNC, but to make it secure you have to route it through an SSH connection, which can be complicated to set up. I use NX, which is an X11-only remote desktop protocol. First you have to set up an ssh server and make sure it's open to the Internet. Then install an NX server. Afterwards anyone on any major platform should be able to connect and see their desktop using the NX client.

There are a few implementations of the NX protocol, such as the open-source freeNX and the proprietary (but free for the basic version) one by Nomachine. Which one you install is up to you.

3
Get Ubuntu Anywhere?
3
Remote desktop access to Ubuntu MATE 15.10
0
(16.04) How can I remotely control an Ubuntu desktop outside of its local network using another Ubuntu?
11
What is the alternative for Teamviewer?

8
Secure Remote Access To Machine?
2
Log of people/ip's who connected to my machine through remote desktop
1
What do I need to set up a remote terminal
0
Remote Desktop Secutity
0
Desktop remote control unable to access my account
2
How can multiple clients access single remote desktop?
4
Ubuntu 18.10 Enable Remote Desktop for root
1
Multi-user remote desktop from windows to linux machine
0
How to let Chrome Remote Desktop run with encrypted /home before login