How can I configure a virtual host on Apache?

I am trying to create a virtual host on Apache in Ubuntu(in a virtual machine) but I cannot get it. I did a lot of configurations but any of them give me any result so I created a new virtual machine to do it from the begining. I am going to put here all the process step by step so all of you could follow what I am doing wrong.

First of all, what I need it is to make my root directory of my server as /var/www/extras so I created this new directory on /var/www.

and create an index.html with some text on it.

After creating the new directory I have to change my 000-default.conf file to change the DocumentRoot directive.

and change the DocumentRoot directive as follows:

and after that I restart Apache to save my changes:

and modify the Directory block on apache2.conf file

Inside /var/www/extras directory I am going to create a new folder (ejemplo.es) which is going to be the folder of my virtual host.

and inside of it an index.html file as I created for the root directory of my server with the text "This is an example".

I need to create a new file on /etc/apache2/sites-available with the configuration of my virtual host.

with the following configuration:

and on apache2.conf file I am going to change IncludeOptional sites-enabled/*.conf to Include sites-enabled/*.conf. (This was a prove to see if maybe my Apache did not include this folder and could be the posibility that my VirtualHost did not work for that).

So now I have to activate the VirtualHost I have created:

and restart Apache to save the changes I made:

If I list the content of the folder /etc/apache2/sites-enabled I can see that my VirtualHost it is active now (ls command to this folder).

To end, I add a new line on my hosts file (sudo gedit /etc/hosts):

so now the file has three lines with IP's:

and some lines below that starts with ff00... but I think they are not relevant for my purpose.

And finally I have to execute the following command to save my last changes:

but I get the default page of www.ejemplo.es instead the file that I put on my VirtualHost folder.

I am sure I am doing something wrong but cannot figure out where. It is the first time I create one VirtualHost and all tutorials that I have seen had these steps so I think I am missing something.

I expect you could follow my steps and ask if you have some doubt about the configuration that I made.

I wanted to comment on the question for further information but I haven't had enough reputation point, so I just try answer this for you to give us little more information.

I did the same steps as you listed above in my new VM, and it's work fine.

I don't know exactly how you test the above domain, whether browser in your box (ubuntu - client) or in your host (which is running virtualbox).

If you're trying to visit the domain under client-ubuntu, you can add more IP into virtualhost tag:

If you're trying to access from your host with IP 10.0.x.x, it may be not accessible. Especially if you didn't select the right network type for your VM. You can ping the IP first before checking the local domain work. In my case, I select the bridge connection (with copied NAT), so my VM can act just like any other physical device in my network.

Other thing is, if you have your site which is already on-service, and you want a local environment for developing and testing, it's better to use different domain (such as: .local, .dev) instead of using same domain.

Check if the syntax of the ejemplo.es.conf is correct

It looks like this. Make sure the directory is mentioned 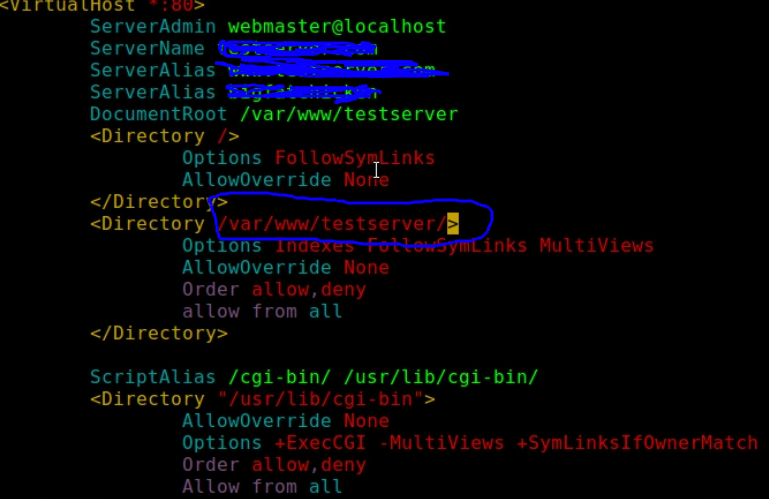 I hope this helps good luck

Not the answer you're looking for? Browse other questions tagged 14.04 server virtualbox apache2 or ask your own question.

1
403 Error on Virtual Host on LAMP stack
2
Apache web server and virtual host can not be accessed from other Ubuntu pc in LAN
0
Apache Virtual host goes to Internet
0
The DocumentRoot in Ubuntu's apache is /var/www/html so why would apache2.conf have part of it say “<Directory /var/www/>”