How to show line numbering in nano when opening a file

Is there a way to tell nano to automatically show line numbering each time I open a file?

The keyboard combination to display the current line number whilst you are using nano is CTRL+C.

Alternatively, to display the line & column number position you could just use the -c parameter when launching nano i.e:

To make this permanent, nano uses a configuration in your home folder ~/.nanorc

(don't worry if its empty - this file doesn't exist by default)

N.B. the deprecated syntax set const is shown in the animation 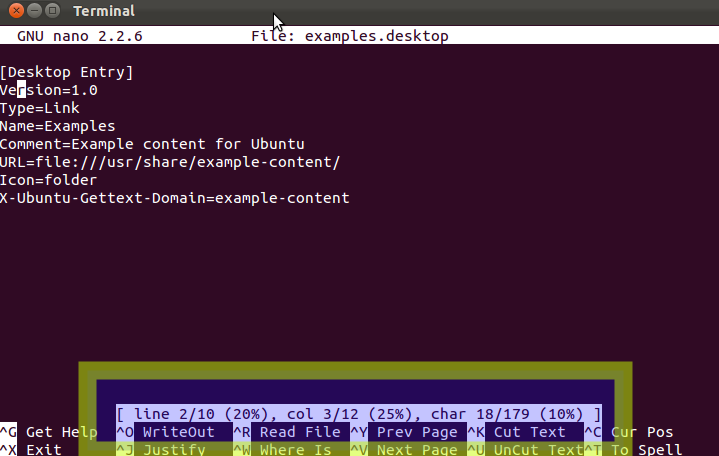 Since you are using line numbers remember you can use ALT+G to jump to a specific line number.

Accidentally found nice shortcut: Alt+#, which in some keyboard layouts can be done with Alt+Shift+3.

According to the man page for GNU nano 2.9.3 (also verified on version 4.8) , you have two options for automatically opening with line-numbers shown and one for toggling them on/off once nano is open:

You can use the -l or --linenumbers flags.

Via the config file(s)

So the contents of my ~/.nanorc file are simply:

Via a key bindings

Not exactly what the OP was asking for, but for completeness you can also toggle line number on/off via the default keybinding (as of v4.8) of Alt+N.

Alternatively you can rebind this key via the man file mentioned method:

In response to comments about alternate config files, from the description of man nanorc:

I would not typically advise others to change the system-wide config file, unless you have a good reason to do so, as it will likely be overwritten during any updates, and is not likely to be included in system backups, which typically only include the home directory.

As noted by a commenter, this may not work as expected if you have to use sudo with nano, e.g. sudo nano myFile. This is because when you use sudo you are doing whatever comes after sudo as the "super user", thus the name (super user do ..). If you edited your non-super user config file (e.g. ~/.nanorc or /home/myUserName/.nanorc) this will not be run when you use sudo as you are not running nano as myUserName any longer. Thus, you have a few options.

Then add the following to your .nanorc file:

You can use Meta+# to turn line numbers on and off from within Nano.

If nano -c filename does not work, use nano filename then Ctrl +_. It will ask you for the line number to go to.

If you have already opened the file with nano you press

This command will require column and line, you enter them this way:

If you are at the top of the file and you only want to find the line:

If you are at a acertain line and you want to find the column:

If you haven't opened the file yet, you can do this:

and the file will open with cursor in the line 10, chanracter 23, so you can try also:

nano +,23 file (enter) (Note that this will send you to the character 23 of the first line only)

It's 2021. The OP's question is still valid, but many of the answers here are for an older version of nano. I'm not presenting this answer as "the last word" - only as an update.

The default screen of nano consists of five areas. From top to bottom these are: the title bar, a blank line, the edit window, the status bar, and two help lines.

Where to display line numbers?

Line numbers may be displayed in one of two places:

There are several methods (this is not necessarily a complete list):

These all work as of today: Ubuntu 20.04, nano --version = GNU nano, version 4.8, although there are minor discrepancies in the documentation.

Not the answer you're looking for? Browse other questions tagged nano or ask your own question.

20
Save an edited file in nano, but no permissions
0
How do I copy music from ipod nano to computer (Banshee)
88
Delete total line in nano?
0
How to insert line break + taboolation in a Nano text editor?
1
How to show all lines in nano linux
0
Changing NANO file saving location
0
Use nano to change an "on" to "off" line in read only file
3
Opening this file in nano shows peculiar red area
3
Opening a file in read-only mode using nano