Out of Memory Issue

I am running Ubuntu 14.04LTS on a Dell PowerEdge R730 with 32 GB of RAM and an Nvidia K80 GPU.. I have a python script that runs for a long time, but really just makes a bunch of relatively short-lived system calls to other programs (some of which use CUDA extensively in case that matters).. Other than the overarching python script, the individual system calls only run for about 45 seconds a piece, and the python script itself doesn't "maintain" anything - it just does the system calls and iterates - not any storage of results, etc..

As I watch the program run and monitor memory usage with "top", I see the reported "free" memory go down over time.. I understand this isn't usually a concern due to caching being employed. Eventually, though, the machine hangs and doesn't respond in any way (i.e. no mouse cursor movement on console, no response from remote terminals, etc).. When this happens, I have to hard reboot the system, and things are back to normal, and I can pick up where I left off, until it hangs again..

Another point of interest - after enough reboot-and-restarts the program finally completes.. Again, after this, there is nothing of significance running on the system, however, the gnome-system-monitor and top both report almost full memory usage, and trying to run other (minimal) commands are often "Killed" by the kernel.. Checking the system logs, it reports "out of memory" which seems to indicate that the memory being used is not cache but memory that is actually "claimed". The question is - by who? Checking all the memory utilities that people have mentioned on this and other forums, no processes claim to be using much memory..

I've read reports of kernel memory leaks, and that's what I want to claim, but it just seems unlikely..

Question: How can I determine what is claiming all the memory? I'd like to be able to determine if its in the kernel or if its some process that running.

Prior Reading and understanding: I've read through a ton of posts about understanding Linux's memory usage and reporting.. I understand that when programs like top report very little memory "free" it is not necessarily a problem because much of the "used" memory is cached, and actually having your RAM full of cached stuff is good.. I believe, however, that this is not the issue that I am seeing, because if it were cache it seems like programs would be able to make use of it. The fact that the kernel is stepping in and killing new processes and dmesg is reporting the system is "out of memory" seems to indicate memory is being occupied in a non-cache way, but it doesn't seem to be being reported in any memory analysis tool I have tried..

Update: Based on an answer below, I looked at /proc/meminfo when things were starting to go poorly, and while I don't know what all these mean, there are a few that seem .. suspect.. "DirectMap2M" seems way problematic and "VmallocChunk" too, although less so...

Update2 Just ran things again and had the cmd "free" get captured every 15 seconds.. I watched the free column go down as the program ran until it reached a very low value (about 190000) and when it reached that level, the program hung and everything started going very slowly.. I ctrl-c'ed the program after it hung for a bit and eventually the terminal responded and took me back to a prompt.. However, "free" still reports about 190000 in the free column and even general use (just typing in a terminal) is very slow - no program is currently running. Looking at /proc/meminfo, the "DirectMap2M" field is crazy again.. I did capture the contents of /proc/meminfo regularly as well and can take a look at how things changed over time.

FYI: here's the output of "free" command when things hung up:

Here's a plot of the DirectMap2M value from /proc/meminfo over time. After the right-most point in the plot, it went to the ridiculous huge value - looks like an underflow.. A little bit of googling found others with an underflow issue here.. I don't know what DirectMap2M represents though.. 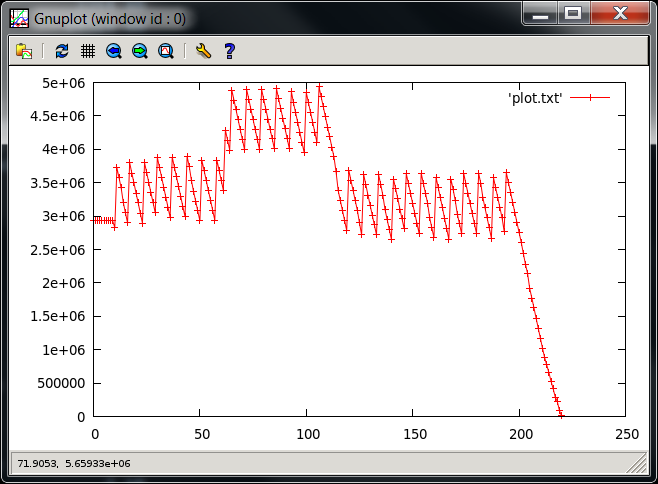 Update 3: Still fighting this.. Some recently discovered info to add:

We've got it down as much as we could to this:

Every time we run that on the Dell T630 with the NVidia K40, we see DirectMap2M go down. If we do it enough, we see the underflow issue and the machine has to be rebooted.. We also have a Dell R730 with an NVidia K80 that shows the same behavior..

Interestingly, we have yet another computer (its a laptop with an NVidia GTX980M) running the same Ubuntu kernel and we do not observe this behavior when we run the above..

A good place to start is to track the statistics in /proc/meminfo, this has a considerable amount of detail on global memory utilisation. I suggest capturing the output from /proc/meminfo periodically (say every 30 minutes or so) and one can then examine this to see where the memory allocation growth is occurring. From that, you will have at least some idea on where to look next.

We experienced the same problem with CUDA jobs running on Debian Jessie machines with GTX 970 and GTX 980Ti GPUs. Your test case also caused our machines to run out of memory within minutes.

What eventually fixed this annoying behavior for us was to install the most current beta driver from nvidia - version 364.12 at the time of writing. It appears to be independent of the Linux kernel (we tried several) and the CUDA version (we also tried several). This appears to have been a bug in the nvidia driver itself that was fixed only recently.

Not the answer you're looking for? Browse other questions tagged ram memory-usage or ask your own question.

0
Preventing the system running out of memory

15
What is the difference between the memory usage report in System Monitor and the one by free?
11
Memory usage doesn't add up over time
3
ux31a freezes when running out of memory
0
4GB out of 8GB total reserved 64bit 12.04 why
2
"Inactive memory" management on Linux
1
Ubuntu 14.04 does not see all of my RAM
11
Cached Memory Takes all the memory