I recently broke my installation and I've tried in vain to repair it using apt-get and all his friends. Now I'm trying the live USB and I'm not sure how to continue. And I desperately don't want to damage my existing Windows 7 installation or my Linux profile.

At first I don't know which installation option I should select 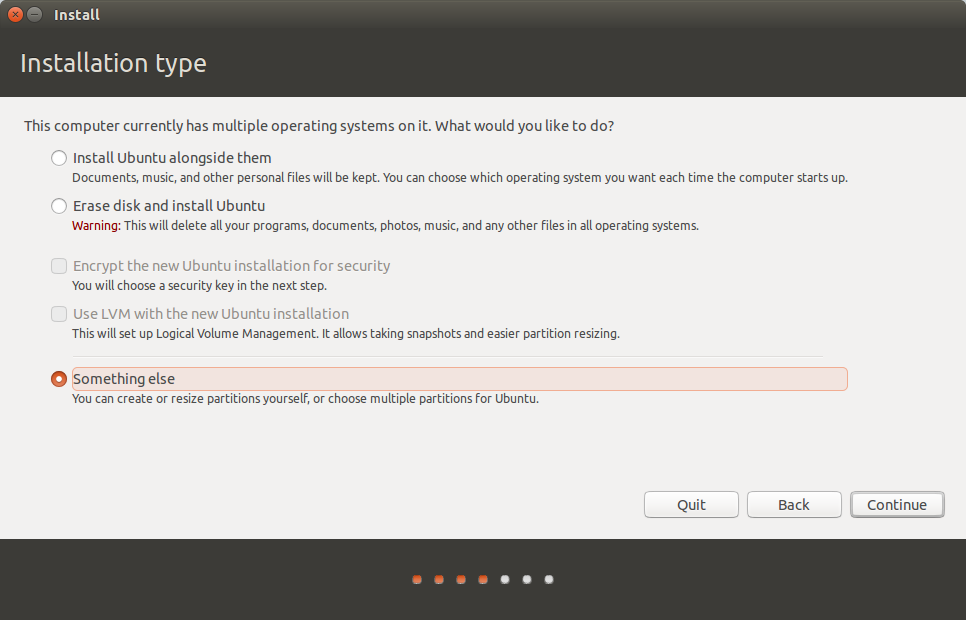 I've tried the option Something else but I'm stumped as to which partition I should select. I get the error message no root filesystem regardless of which option I select 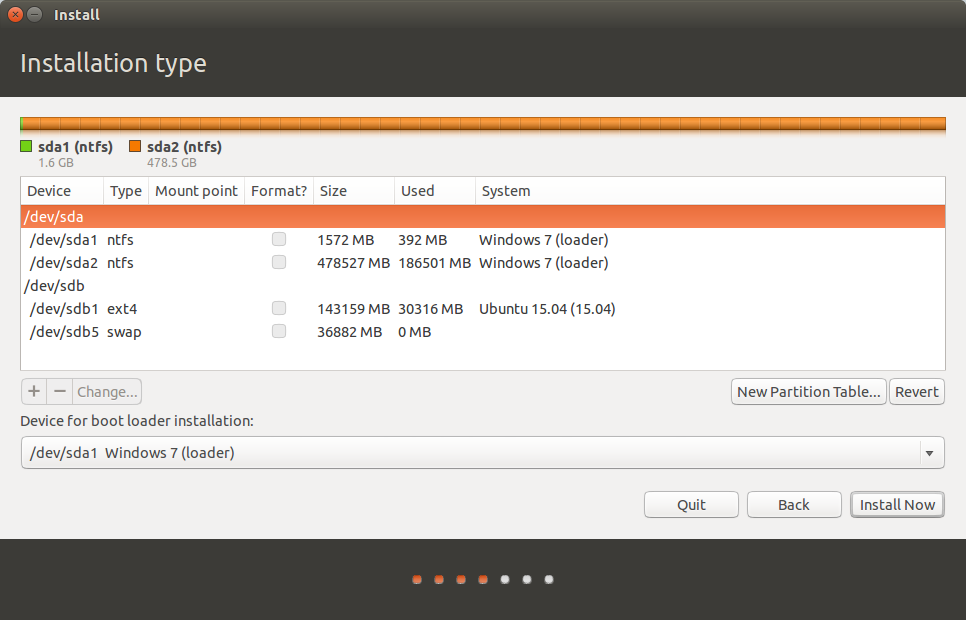 Using gparted, shrink /dev/sdb1 to 32GB. It's plenty of room for a typical root partition, and won't crowd your current situation and leave ~110GB for /home.

While re-partitioning is not risk-free, in 20 years and multiple dozens of re-partitionings, I have never had a problem. Check out How to resize partitions? for pointers.

Create partition /dev/sdb3 from the remainder of the first partition.

An advantage of this method (separate partitions) is if you wish to change distributions, in the future, there is little drama. It's almost like changing a shirt. All your personal data will be on another partition. The new system can write the old root partition with glee.

Mount both partitions with either your GUI, or with the commandline using standard practices, such as discussed in How to access a usb flash drive from the terminal? (How can I mount a flash drive manually?)

If using the GUI , you may run into permission issues unless you use a super user (root) GUI. The partitions would be mounted somewhere like /media/{LiveCD_user}/{UUID of dev-sdb1}/home/{old_user_id} and copy/move it to /media/LiveCD_user/{UUID of dev-sdb3/old_user_data.

call them what you will, the names are only for your benefit.

Mount the two new partitions in your system

Move your old home directory to the new partition

Unmount the partitions after the data is moved to not be reminded during installation.

Launch the installer and install the new system with Something else option.

Select /dev/sb1 as root / and ☑tick the format partition.

Select /dev/sdb3 as /home do not format this partition (it has all your data).

You've installed a dual boot before, but be careful with GRUB. Double check that regard.

When the dust has settled, boot into the new system, and drag the data you want from /home/old_user_data to the new location.

Delete the leftovers when you're done.

Make another usb stick with gparted live on it. Boot from ot and start the tool. Then choose to shrink sdb1 for about 30Gib. You won't lose data this way.

Then boot back into your live media and install the root partition as mentioned in the first answer.

Gparted has the ability to shrink partitions without destroying data, because it shoves it to the beginning of the partition.

Another method would be to just boot your live system and make a .tar.gz archive from your /home partition. Then make fresh ubuntu install and unpack your /home to /home.

****** WARNING * This will blow away anything that remains on sdb1.* So you will lose any data from your Ubuntu install that you did not back up.

If you want to rescue the status of your system and not delete a thing you should try using the boot repair disk: Boot repair disk

It has helped me in so many situations like these, maybe it can restore your stuff. Try it out first before you attempt to delete something you maybe don't have to...

One way to recover yourself from that mess is by reinstalling Ubuntu, after having everything backed up along with the list of installed applications.

Here's a step-by-step way to do that:

boot repair only repairs your mbr not OS

i) create partition window appers then

now u get a prompt that /(root) and swap area partitions will be formatted click yes and just relax until installation is complete.

If you have given up on fixing, and just want to get your data back and reinstall Ubuntu, then you have 2 options

Please do comment if you have any questions, and Im going to bed because its 6AM. Good night. Also, Please do tell me, why the heck did you give SWAP 30GIGS OF SPACE?!

Problem fixed, based on advise received from user @hbdgaf in chat, by simply reinstalling and creating another account while doing so. After this I restored my old account. Still had to reinstall most applications though.

PS: also had to fix inodes while reinstalling. So I guess that's what thwarted by earlier attempts to repair the installation.

Not the answer you're looking for? Browse other questions tagged system-installation live-usb or ask your own question.

269
How can I get a list of all repositories and PPAs from the command line into an install script?
274
How to access a usb flash drive from the terminal?
173
How to increase swap space?
124
How to resize partitions?
5
How to restore/add previous user account
0
Is getting installed package list from a dead system possible?
1
Ubuntu 16.04 crash. How do I recover?
0
Problem in upgrading Ubuntu 14.04 to 16.04
0
ubuntu 16.04 gparted resize root boot fails
1
Fixing/rolling back broken installation
See more linked questions