Why do some open applications appear as “question marks” in the Unity launcher?

I'm having a problem with a couple of programs that have launchers in unity but then create a separate icon after launched. Is is possible for the launcher to track the windows it spawns to organize better? Or is this a bug in Unity itself? 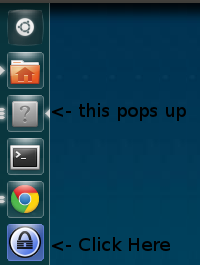 It might not matter but this specific program is a mono program, and the icon spawned is listed as the panel.

Problems like this relate to Unity's application matching framework. To simplify the technical details, program windows and applications are two separate things to Ubuntu. Ubuntu needs to 'guess' which application owns a particular window. And sometimes that guess fails, and a question mark appears in the launcher.

The failure may be due to:

The application shown in the question (KeePass2) suffers from a type 1 problem that has been reported to the appropriate bug tracker.

The below examples are technical, aimed at programmers who want their own application displaying properly in the Ubuntu launcher.

This entry starts a program by calling the Exec executable. Whenever that program displays a window or dialog, Unity will notice that its executable "belongs" to this application description, and use the given Name and Icon in the launcher.

This is a barebones example. The formal specification covers many advanced features.

Let us assume that my_app.desktop exists in a valid application directory, but:

In any of the above case, Ubuntu will be unable to properly list the application window in the launcher.

As of Ubuntu 11.10, BAMF has a number of bugs that prevents correct application matching. Common (temporary) pitfalls include:

In these cases, programmers have no option but to use a workaround, such as removing the symbolic link abstraction, or linking to the executable directly. Neither of these are required by the desktop entry specification itself.

The window can only be matched to the application if the WM_CLASS property has been set. To do this in X11 you use:

You need to pass a pointer to a XClassHint structure with field 'res_name' and 'res_class'.

I had a few issues with 16.04 including the greyed out icons and sometimes the touchpad would become erratic (Acer V15 nitro) also the software centre (maybe other icons too) would not open from the icon (only from a terminal command) . I found a recommendation somewhere to uninstall and reinstall the gnome software. Since I did this the whole system has been 100% stable no more greyed out icons and works perfectly. It looked scary initially when I rebooted after this change - lots of system messages on reboot- so do it at your own risk.

Not the answer you're looking for? Browse other questions tagged unity launcher icons or ask your own question.

0
Why do I have question marks instead of ordinary icons?
45
How can I remove duplicate icons for “launched” java programs in the launcher?
15
How can I fix program icons that appear as a question mark in the Launcher?
6
PyGTK Application Icon Blurred in Unity
4
KeePassX 0.4.3 on 11.10 (Unity) not visible in task switcher (Alt-Tab)
2
How to remove “?” icons from Unity programs list
0
Chrome won't start

460
How can I edit/create new launcher items in Unity by hand?
15
Possible to have 2 unity launchers?
4
How to launch different firefox profiles via the keyboard using Unity
2
Different behavior when launched from terminal instead of Unity launcher
1
How do you keep Unity Panel while using Cairo-Dock on 12.10?
0
Screen turns black when using launcher icons