How can I resize NTFS partition in GParted?

My family PC has Windows Vista and lately it has became unusable, having strange errors and taking hours to do anything at all, so I'm installing Ubuntu 11.10 alongside it. I went into GParted to resize the Vista partition but found that it had an exclamation point in a red circle next to it: 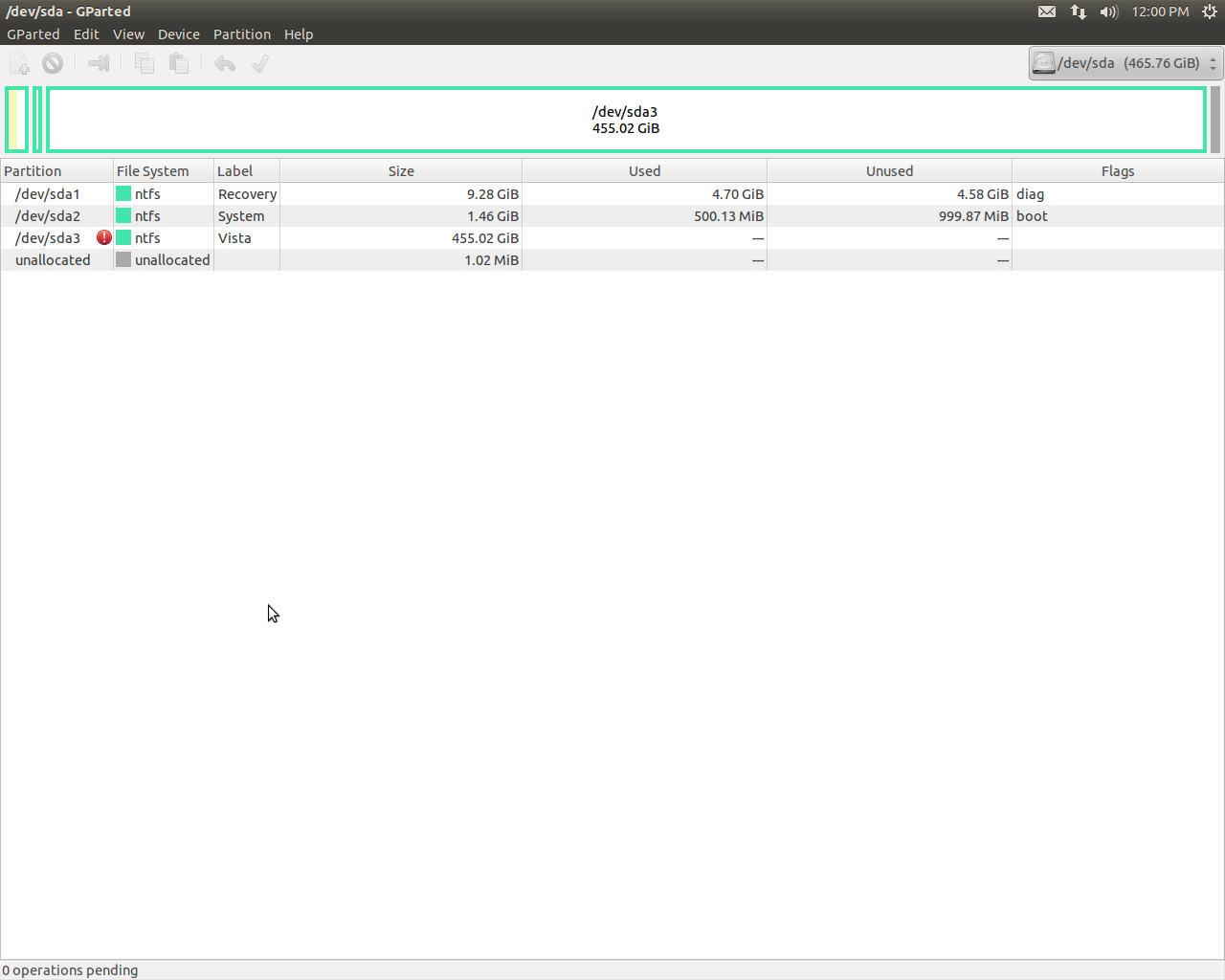 I tried to resize it but the Resize/Move button was grayed out. I thought that this might have to do with the exclamation point so I looked at the information and found a load of errors: 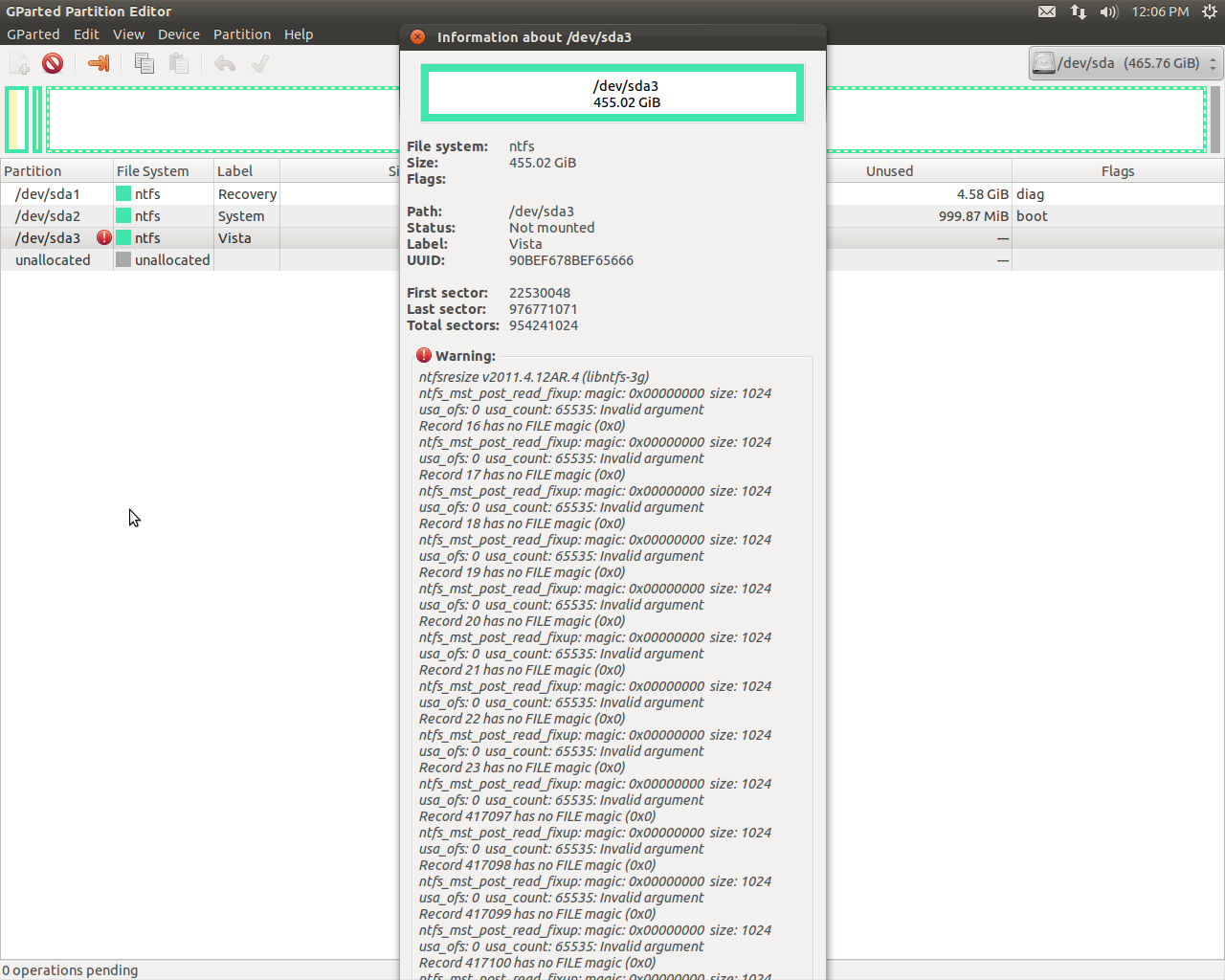 What does the exclamation point mean? How can I resize my partition?

I booted into Safe Mode with Command Prompt in Vista as suggested by eug and ranchkdsk c: /F /R (/F Fixed errors on the disk, /R Locates bad sectors and recovers readable information) and got:

When I reboot it doesn't run chkdsk, I'm selecting Safe Mode with Command Prompt again because I can't boot normally. How can I stop it being used?

I tried doing what Luis suggested. Here is the terminal output:

I still cannot resize the partition. Ntfsfix doesn't look like it did anything and ntfsprogs is already installed. I can access the hard drive and do backups with the Ubuntu Live CD which I'm using now. Any other suggestions?

I attempted to use the ntfsresize command but I got an error:

This is because I ran chkdsk in Vista Safe Mode with Command Prompt and it couldn't do it because it was in use but offered to do it at the next reboot. I reboot and I get to the menu to the menu to choose whether to Start Windows Normally, Safe Mode, etc instead of checking the disk. Is there any way I can unschedule?

I just found out that I could use the -f option to force it. It failed and told me to run chkdsk /f in Windows and then reboot twice. But the chkdsk program is in the partition I am trying to check so it says it is in use.

I turned on the PC and didn't realize it didn't have the Ubuntu CD in so it tried to boot into Windows. When I came back to it I realized it had started running chkdsk, because before I couldn't boot into safe mode I scheduled it to run chkdsk. After it completed the Vista partition no longer had an exclamation mark next to it and I am able to shrink it. It's currently shrinking now and its been on the real resize stage for a while but apparently it's normal if it takes a long time. (Extra info: I did cancel it because I didn't think anything was happening but it messed up the partition. Somehow chkdsk was scheduled again so I was able to resize it again. I'll be sure not to cancel it this time.)

So if anyone else has this problem, run chkdsk /r at Safe Mode with Command Prompt, or the recovery console if you have it (I don't).

Firs try this from within Ubuntu (In the terminal):

It will try to fix as much as it can. If it does fix the problems the do the following before the disk dies on you:

which should give you support for NTFS filesystem in Gparted.

Then just open gparted and resize/check the filesystem. This is all assuming that the check with ntfsfix went fine and the check with gparted did also.

If both go bad and you still can not boot with the ntfs partition I suggest looking for another PC than you can connect the hard drive, fix the problem there or do a backup.

Not the answer you're looking for? Browse other questions tagged installation ntfs gparted or ask your own question.

5
Shrink NTFS Windows 7 Partition with GParted
1
Resize Windows partition without affecting Ubuntu in dual-boot
1
Dual boot Ubuntu and Windows 7?
0
How can I get Gparted to shrink NTFS partition?
0
Partitions in Windows/Ubuntu

9
Is GParted a good tool for resizing an NTFS partition?
7
How can I resize an external USB NTFS partition?
97
Fix corrupt NTFS partition without Windows
50
Why does my NTFS partition mount as read only?
3
Red exclamation mark when attempting to resize HDD - gparted
0
Unable to boot Windows 7, though the NTFS partition is accessible
3
partition resize problem gparted
1
Unable to read the contents of this file system, required for ntfs file system support: ntfsprogs / ntfs-3g, gparted
0
Can't Resize Ext4 Partition through Gparted on Ubuntu Live USB