I am attempting to clone multiple partitions with either Clonezilla or dd without cloning the whole drive which consists of:

Seen below is the original installation on a 128GB SSD, which I successfully cloned to a larger 250GB. This as a backup that I would later try to resize and shrink down.

Below is a photo of a working clone of the operating system, which is now about 41 gigs in size total after being resized with Gparted.

I have tried to clone these partitions to my 64GB USB disk as a working portable backup, but have ran into some issues.

I have tried using:

This bit for bit cloning method tried to copy the unallocated space on the input drive, which obviously won't work because the output disk is much smaller. In a second attempt I was able create a partition table on the destination disk that matched the source's sizes. I then tried to use boot repair and got this output

Moving onto to Clonezilla options; normally a disk to disk would be my choice, but since the destination drive is smaller than the source, Clonezilla will not allow this.

I do see an option to copy ONE partition at a time using the disk to disk option, but do not see how I might clone all three at once. I know there is an option to do this with saving as image but I want the USB to be bootable.

One way I can think of making this work would be to make an image of the partitions I want to clone using disk to image, then restoring the image to the 64GB USB disk later, but after trying this I ran into more errors.

After making an image of /dev/sdb/ I attempted to restore the file but got this error about /dev/sdb2/ missing: 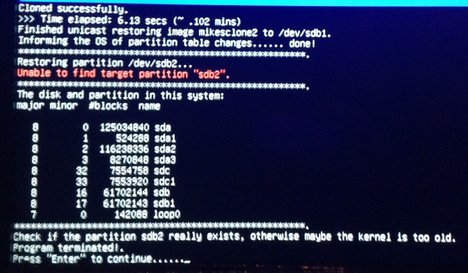 (/dev/sdb is the target for this session)

So perhaps my image was OK, but it didn't properly read /dev/sdb2/ so I checked it with Gparted again and saw this following here:

I checked with Synaptic Package Manager to see, and I already have e2fsprogs v1.42.9-3 installed. So I did some reading and tried the following solutions that have worked for other people:

this seemed to work temporarily, as after another reboot or two, the problem still persists. I am assuming now that during the device to image process in Clonezilla that my /dev/sd2/ was not read properly, as I can not even access this partition in Nautilus or Gparted. I am thinking that is may have been caused by the re-sizing of the drive, but can not be sure, as it will still allow me to boot to this installation.

I think I can actually clone these two partitions to image, and then restore them but I need to address this problem of:

Could this have come from re-sizing the partition? If so, how come I am able to boot to this installation if it can't be read?

In your case the last partition is /dev/sdb3, so:

I was able to clone to a smaller drive by the following steps:

The method of cloning was to plug in an external drive that had working clone of my original install and copy that using:

(this will give you the output as the data is copied)

See also my thread HERE So with the help of many wise Ubuntu gurus I was able to acomplish cloning onto a smaller drive. Thank you to all who contributed.

0
backup windows partitions with dd
46
How to clone to a smaller harddisk?
24
"Re-size" the .img for smaller SD-card. How to SHRINK a bootable SD card image
0
Clone multiple partitions without re-creating them manually

4
Strategy Need to Migrate larger SATA drive to smaller SSD?
0
Switching Windows and Linux Partitions
2
Optimal Ubuntu setup for taking advantage of Clonezilla?
6
Clonezilla image size smaller than expected
0
Clone multiple partitions without re-creating them manually
0
How can I clone my HDD to a smaller SSD?