I'm trying out some different desktop environments to find the one that works for me, and right now I'm really liking Cinnamon.

I'm having only one strange problem, though. When I try to connect to my openVPN server using the GUI drop down interface in the panel, it refuses to connect. When I click to turn on VPN, it flickers to "on" for not even a second, but then immediately goes back to "off". 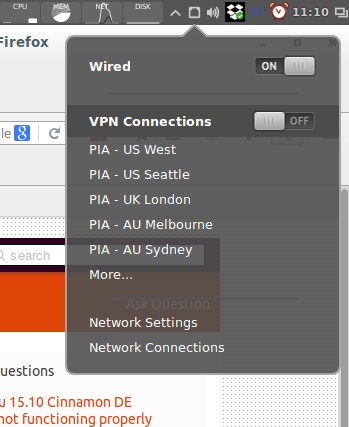 How can I diagnose and fix this problem? It seems to be limited to just Cinnamon, though I can't understand why a desktop environment would treat VPN differently.

I looked it up on the internet, and found suggestions that I should clear out the /etc/NetworkManager/system-connections/ directory, reinstall network manager with sudo apt-get install --reinstall network-manager, and then reinstall Private Internet Access. Unfortunately, none of this helped and the problem persists exactly as before. The same error message in syslog still occurs after having taken all these steps.

Maybe some of the following can help:

When in Cinnamon have you tried manually adding a OpenVPN connection or importing a saved VPN configuration from Network Connections?

To import a saved VPN configuration go into:

After seeing your error log and trying the following, the Cinnamon GUI did seem a little glitchy but if it's not a username/password problem then I have no idea what it is.

So I finally found a friend with PIA and installed Ubuntu 15.10 with Cinnamon on a VM:

After a base Ubuntu 15.10 install, I installed Cinnamon using package:
cinnamon-desktop-environment
updated the entire system and rebooted into Cinnamon desktop then followed PIA-Ubuntu OpenVPN, after installing relevant packages it asks for username (or rather number).

When the script was finished I got the same GUI that you've posted. I then clicked the VPN Connections toggle switch to ON and then it immediately turns OFF (I expected this as I had no password for any VPN gateway, so there was no default VPN gateway to connect to).

I then selected "PIA-AU Melbourne" from the list and a "Authenticate VPN" dialog box pops up, I entered the password and a few seconds later got a system notification telling me that the VPN connection has been successfully made. A white dot appears in front of "PIA-AU Melbourne" in the GUI list. I checked the ip and yes it's Australian. I then checked PIA's site and yes it's a PIA ip. Success so far.

With syslog still running I then selected a different gateway, "PIA-Brazil", the password dialogue box came up again but I selected cancel and got a similar error log as you did in syslog (). I selected "PIA-Brazil" again, input password and no problems again. So the only thing I can think of in your case is a username/password problem.

If the password dialogue box (probably the user agent) didn't pop up for you, after running the PIA Ubuntu script again, go to Network Setting from the GUI in your picture and select any PIA profile e.g. "PIA-AU Melbourne VPN" and go into its settings and check if your password is in there (your username and other settings should already be in there because of the PIA Ubuntu script). Then select that gateway from the GUI in the pic. Maybe try it out in a VM first

Not the answer you're looking for? Browse other questions tagged vpn openvpn cinnamon or ask your own question.