Ask Question
Asked 6 years, 8 months ago
Modified 2 years ago
Viewed 7k times
3
This question already has answers here:
Is there an SSH client which duplicates commands to multiple terminals? (2 answers)
Closed 6 years ago.

I am running Ubuntu GNOME 15.10 with GNOME 3.18 and the other machines should be running the same.

One that I have used is ClusterSSH to send to multiple terminal windows at once.

ClusterSSH will open its own terminal windows that you can send commands to with the application. Once in ClusterSSH press Ctrl+Shift++ or click on Hosts in the menu and select Add host(s) or cluster(s) and type in all you want open separated by space between each one. You should get a window looking like this one: 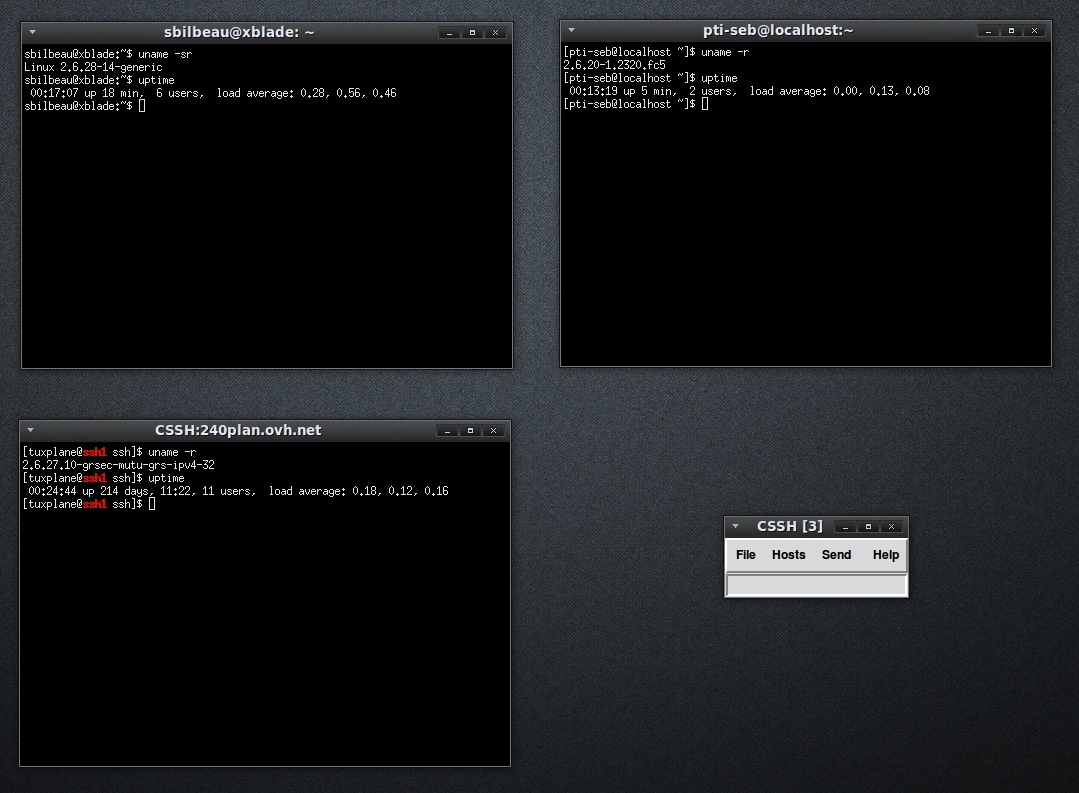 then any command that you want to send to all the windows at once you type in the box below the File Hosts Send Help menu items.

I have also written a script that you can run from a command prompt to open as many Cluster SSH windows as you want. I do recommend that before you use this script to run ssh-copy-id localhost so that it launches without asking to enter a password.

Take a look at the terminator terminal emulator. Homepage with screenshots: http://gnometerminator.blogspot.hu/p/introduction.html

Then click on the upper left button of a pane to organize these panes into groups, and broadcast keypresses to members of a group (or all the terminals). (These also have shortcuts, as you can see or alter them in the right click -> Preferences menu.)

There's an Ubuntu package available, but if you really like this app and plan to use it in the long run, I recommend to check out the gtk3 version from https://code.launchpad.net/~gnome-terminator/terminator/gtk3. Ubuntu ships the gtk2 version, but the gtk3 version is way more improved (mostly due to plenty of fixes to the underlying VTE library's gtk3 version which is responsible for the actual terminal emulation, but also due to quite a few recent fixes to Terminator itself).

5
Is there an SSH client which duplicates commands to multiple terminals?
16
How can I send commands to specific terminal windows?
0
Ubuntu 20.04 - SSH Terminal launcher for many servers