Nautilus Actions is not working on Ubuntu 15.10 Wily Werewolf

In Ubuntu 14.04 LTS I used to MenuLibre application to create menu items for applications in Unity and Gnome desktop environments as an alternative to edit the text file .desktop of /usr/share/applications. 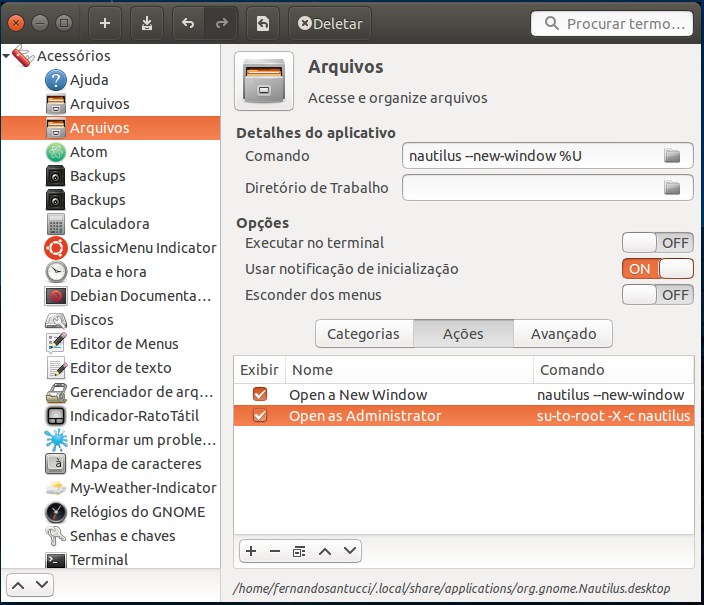 One of the customizations I did was create an action in Nautilus icon context menu "Open as Administrator" with the following lines in /usr/share/applications/nautilus.desktop, not the path of screenshot:

Taking as its premise that the nautilus-actions extension is already installed by default, builtin in the Ubuntu.

When I click the right mouse button on the "Files" icon, the Nautilus file manager, a drop down context menu was shown to the item "Open as Administrator".

However, in the version 15.10 Wily Werewolf, nothing happens, it seems to me that the nautilus-actions extension is being ignored by Nautilus 3.14.

Does anyone have any idea what might be happening?

PS: I know the nautilus-admin extension, but it is not installed by default in Ubuntu.

I found out the problem!

In all forms of launching the Nautilus application under the [Desktop Entry] tag has a instruction NoDisplay=true. This means that none of them are presented to the user in the Dash. The only icon that appears in the Dash, and consequently is present in Launcher, is generated automatic and dynamically by Nautilus.

Now the drop down context menu of "Files" icon in the Launcher displays the option "Open as Administrator" of the [Desktop Action Administrator] tag.

The final configuration file "nautilus.desktop" was as follows:

Not the answer you're looking for? Browse other questions tagged unity gnome nautilus 15.10 nautilus-actions or ask your own question.

6
How to make Nautilus launcher _with_ quicklists behave like normal nautilus launcher in Unity
4
Unity home icon replaced with grey file cabinet
1
Permissions denied in QGIS (perhaps all KDE programs)?
2
Is it possible to execute a .desktop file from a quicklist?
6
nautilus-open-terminal in Wily Werewolf 15.10
5
Ubuntu 16.04: ' Open in Terminal' context menu on desktop opens it only in home directory
0
Where is the location of the Nautilus file manager icon in Ubuntu 16.10?
2
Nautilus Action Configuration tool in Ubuntu 19.04