How do I check the battery's status via the terminal?

I would like a command that displays the battery status in the terminal.

The below command outputs a lot status and statistical information about the battery. The /org/... path can be found with the command upower -e (--enumerate).

You could use tools like grep to get just the information you want from all that output.

One simple way: piping the above command into

If you would often like to run that command, then you could make a Bash alias for the whole command. Example:

Add that to the end of your .bashrc file, and you can type 'bat' any time, in the terminal.

There is also a upower -d (--dump) command that shows information for all available power resources such as laptop batteries, external mice, etc.

A friendly reminder: since Linux kernel 2.6.24 using /proc to store ACPI info has been discouraged and deprecated.

Now we are encouraged to use -> /sys/class/power_supply/BAT0.

UPDATE: Linux 3.19 and onwards, we should look at the following directory -> /sys/class/power_supply/BAT1/

Or for a more verbose output that constantly updates:

Or just the numeric value with this one liner

It's enough to type the command

For detailed information you can type

I didn't have to install any packages before.

Here is an article on a package that can check your battery life at the command line.

Basically, all you have to do is:

Maybe you can try:

I'm a little late to the party but here's my little contribution. Based on the previous answers , I have made a simple script batpower:

The output for executing this ( ./batpower ) is going to be something like this:

N.B. : the batery number may be different for you, in my case it is BAT1, but you can always find it out by cd'ing to /sys/class/power_supply or as Lekensteyn mentioned through upower -e

Replace BAT1 in the above bash code to BAT0 if you have older version Ubuntu i.e. 13.04 or later.

IMPROVED SCRIPT: Since my original post, I've made a small improvement to the script:

As always, pay attention to spaces with bash. This is all self explanatory. If battery is present, it will show up, if not - the script will tell you so. Now, go to your .bashrc file and add $(batpower) to your prompt. Here's mine promt:

Update your terminal or open new tab or window, and now you can monitor battery charge constantly in terminal ! including tty ! May the scripting be praised ! 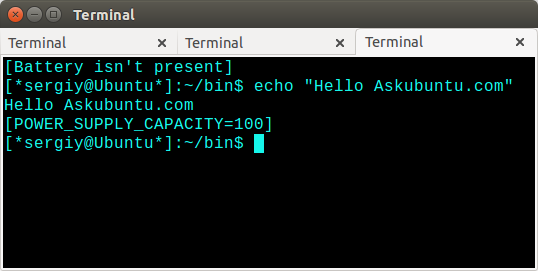 You can do it without installing any extra packages:

This command is lifted from byobu's source. It might be a good candidate for a Bash alias.

Run the following command in a terminal for getting detailed info:

If you just want the state do:

You can either type :

Install acpi, then use watch to continously monitor thru command line.

will show the information such as below and will update every 5 seconds.

Question is why would someone do this? Well, I have a laptop with broken LCD screen that I am now using as my bittorrent box.

I was going to suggest acpi but after reading it's not working in 11.10, I had an idea.

Please type this in your terminal: ls /proc/acpi/battery/BAT0 or BAT1

If you get a "file or directory not found" then this isn't going to work.

But, if it lists files, then here's a script [paste it into /usr/games/ or other directory in $PATH, and run sudo chmod +x /usr/games/batterypercent, or whatever you name it] that I just wrote for you that will give you an estimate battery percentage [See below]:

(Note, if not already installed, install the program calc from the repo: sudo apt-get install apcalc)

I have tested this script on my laptop. I say estimate above because acpi shows 93% battery, and my script shows 90% battery, so try this script against your GUI battery percentage, and see how off it is. In my case, it seems to be consistently 3% lower than acpi's percentage. In that case, you can add this line right before the last line: percent=$((percent + 3)), where "3" is the percentage it's low by.

Similar script without calc or apcalc:

This won't help everyone, but it did me - I use byobu whenever I am using a terminal, and battery is one of the options for the status notifications bar.

Here is what I use. It just looks at the diff between full charge and current charge as well as seeing if the charge is dropping in which case it uses notify to alert the user.

11
How can I get the percentage of my battery life from the command line?
8
Checking laptop's battery state in a terminal
1
How to get constant information about my battery?
1
Terminal check remaining battery health
23
Netbook performs hard shutdown without warning on low battery power
16
How can I find the discharge rate of the battery?
16
How do I check the status of the CMOS battery?
22
Won't Hibernate when Battery Critical
7
Battery not detected
10
Determine when laptop was last plugged in to power
See more linked questions