Can I ignore files by pattern in deja-dup (Backup)?

My Déjà Dup backups have become quiet large and I noticed they contain a huge number of unnecessary files (e.g. *.pyc files, **__pycache__ folders and other build related temporary stuff).

I know that I can ignore specific folders, but is there a way to exclude files and or folders by patterns?

I thought there might be more options usable trough a configuration file, but Déjà Dup doesn't use one. So I looked at duplicity (the CLI it is based on), but the man page doesn't mention a configuration file either. I know that duplicity can ignore files and folders based on patterns (--exclude, --exclude-filelist), but I have no idea how to combine this with Déjà Dup.

Do I have to ditch Déjà Dup and use duplicity manually? Or is there a way to set the needed options, so that they are used automatically, when duplicity is used by Déjà Dup?

But to me it seems like the **'s were not passed to duplicity. So instead I ended up doing seaches like

and added them to the exclude-list manually

Using ** patterns do not (any longer) work because deja-dub escapes [?* characters in duplicity command. See https://git.launchpad.net/deja-dup/tree/libdeja/tools/duplicity/DuplicityJob.vala#n303 :

There is no way currently with Deja Dup to do advanced filtering like that. See upstream bug https://bugs.launchpad.net/deja-dup/+bug/374274

Replace leo with your user name 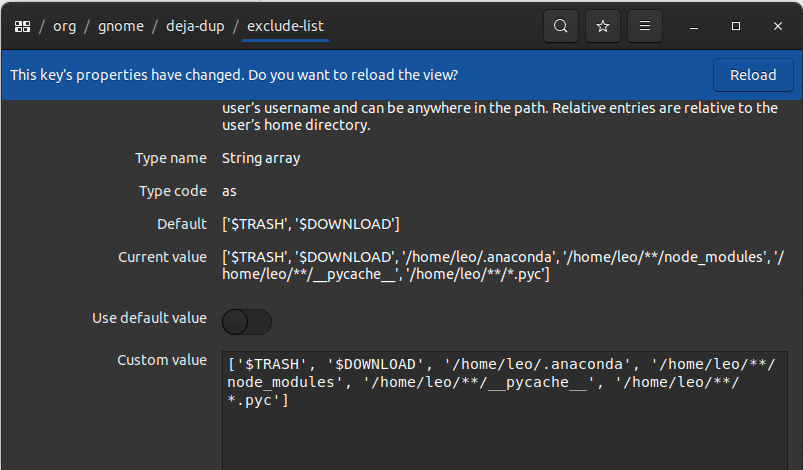 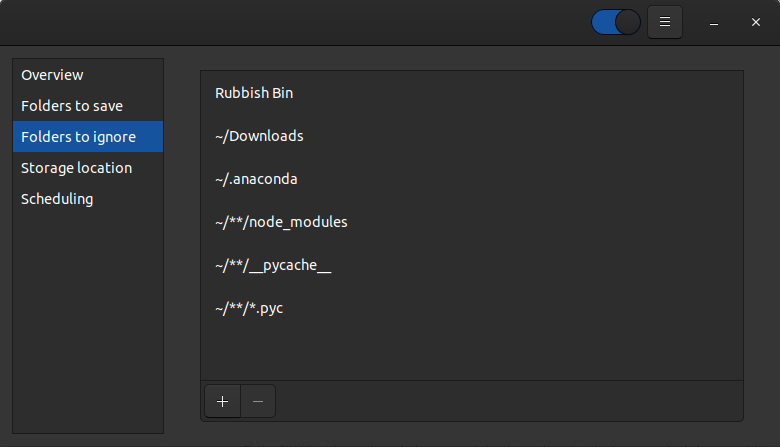 I tried Jacob Nordfalk's method, but it did not work for me (maybe the syntax changed).

However, I was able to change the setting using dconf-editor. You can modify the list at path /org/gnome/deja-dup/exclude-list

Then set your new list by wrapping the old output in quotes and adding your changes:

and run the get again to verify your changes.

So I've write a small script to deal with the issue with a .dejadupignore file. But before one dives into this I have to say it is at least as worthwhile to dive into duplicity docs using include_list.txt as Justin Solms' answer suggests and further explained in this post..

The script first fetches the already existing ignores, then uses the locate command on every regex line specified in .dejadupignore and adds all found locations to a single array. It finally calls the gsettings command as proposed by Paul Smith to add all found files to ignore to the DejaDup exclude list.

A major setback however is the ulimit which defaults to 8192 on Linux. And even after I expanded it, it couldn't deal with the amount of __pycache__ locations as an argument to the gsettings command.

Anyway, hope it is of use to anyone.

With the .dejadupignore file being:

This answer is a variation of Daan Koetsenruijter's response who built upon half the thread here and upon LeoZ's response. So this is a remix of most of this thread. I remixed it because I wanted more control over what's going on and don't like a probably little tested (python) script that I can only read somewhat to mess with my settings. That's not critisizing Daan, it's my problem - thanks a lot Daan (and LeoZ, too), you basically solved it for me!

So, what I did is write a little command line that dumps the files I want to exclude and copy that to the respective value into the dconf editor (see LeoZ's response!).

And this is an example of such a command line:

This does three things. The first command, "find" finds all directories I want to exclude (node_modules in this case) and formats it into the required format using "-printf". Don't do "find . [...]" because then the output will also be relative paths but you want absolute (and replace my username, obviously). Note that -printf adds a newline. This is in order to simplify the next command, the newline will be removed with the last command. Depending on your use case, you may simplify this.

The second command "grep" removes nested node_modules directories, in my case reducing the number of exclude entries from 15,000 to 250 or so.

Finally "sed" removes the newlines again. This can be simplified by not adding the newlines in the first place and using a smarter regExp in grep, but I couldn't be bothered :-)

I recommend removing the "sed" command and reviewing the exclude list first.

Caveats: If you have ' characters in the file-/dir-names you want to exclude, you need to solve another problem, but dconf editor probably saves you from breaking your settings (it checks the syntax). I guess there's more that can go wrong, so take care.

Thanks everybody in this thread for your help!

Sadly neither Duplicity nor Déjà Dup uses a configuration file :( But there might be a possible workaround, the user @mterry mentioned the following in the bug report linked above:

if you gconf-edit the exclude-list and add patterns like "**/parts", the pattern is passed to duplicity and everything works as expected..."

Now, where are those gconf settings stored these days?

The /**/ is important to match through to any directory depth.

Rule 1: The order is important. First be specific first and general later.

Rule 2: What has already been matched in a line (include or exclude) cannot be changed by subsequent matches in later lines. The documentation mentions this; but in terribly confusing English. Hope mine is better ;) The lines above achieve:

Not the answer you're looking for? Browse other questions tagged backup deja-dup duplicity or ask your own question.

0
How to exclude specific file types in Déjà Dup backup

10
Why does Déjà Dup say there is no space left?
3
Can app developers indicate folders to be excluded from Déjà Dup?
1
Restoring backup with Deja Dup from external HD
4
How to restore a broken Deja Dup backup manually
1
Deja-dup backup already running when launched from cron
4
How to make Deja-Dup behave?
0
Restoring files and folders from Deja Dup backup