I want to run a python script automatically when ubuntu starts up. Normally what I have to do is open up the command line on ubuntu and type

This will run the python code so I can now start up my other client code to communicate with it.

I want to find a way to do run this code automatically at start up. I have tried putting a script in my /etc/init.d file and I also tried to have it as a startup program as shown below. 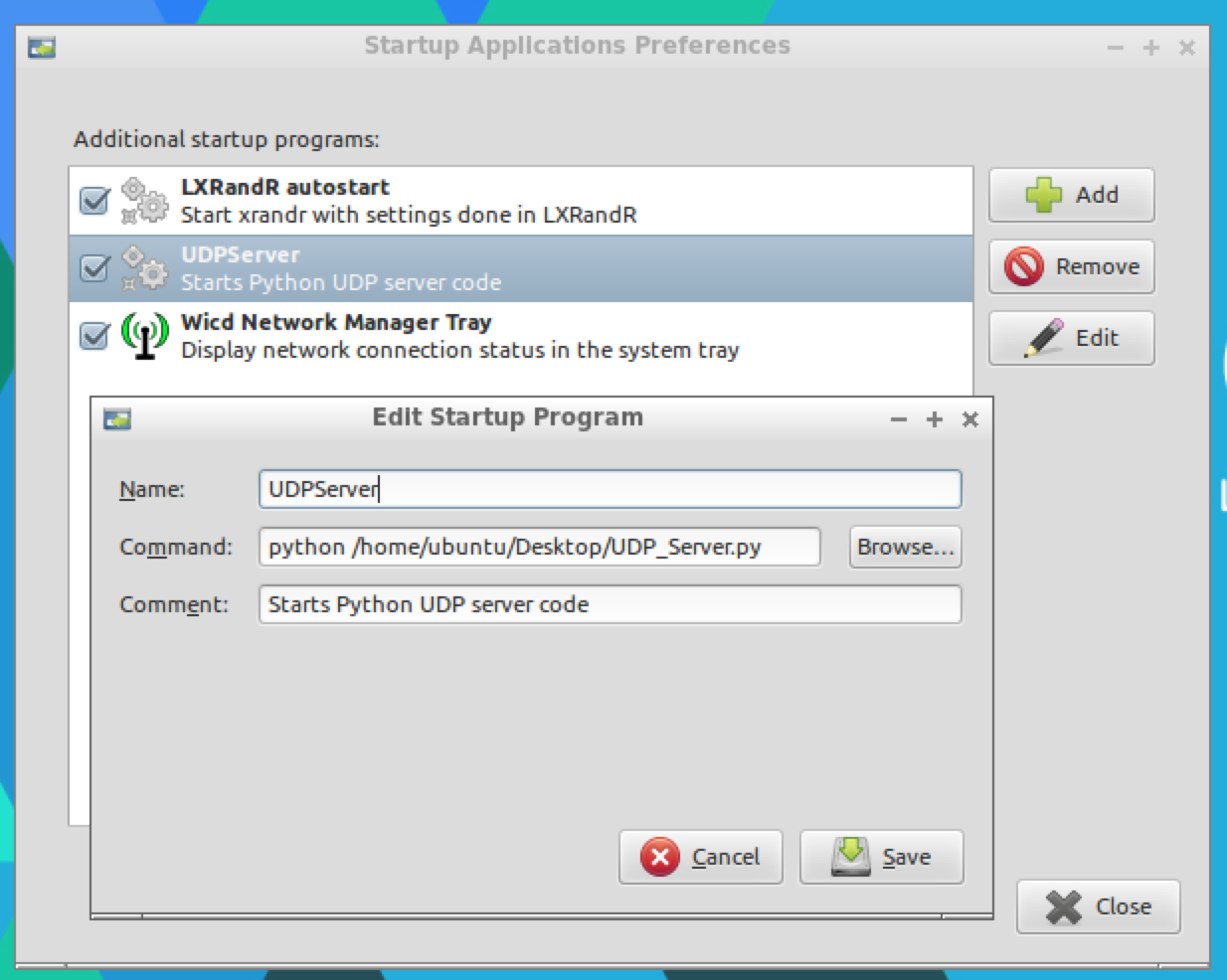 But when I turn my computer on this code doesn't run.. because it isn't communicating with my client code like I expect it to (like it does when I run the python script from the command line)

Putting commands such as a touch command in rc.local seems to work at startup. Also the same is true for crontab. I added a command @reboot and it works. But this particular code doesn't seem to work at startup (whether I put it in crontab, rc.local, init.d, or as a startup application)

Below is my UDP server code

Then the program waits for a connection. If I have my UDP Client send STOP

The computer then shuts down.

But when the code is run at startup and I send 'STOP' via the UDP Client the computer doesn't shut down. The while loop in the server code with sock.recv somehow isn't receiving the strings that are being sent to it.

The code executed at startup after the wifi network was working so my client was able to communicate with server.

I often find the easiest way to run something at startup is via cron with @reboot.

This can live in your user crontab which is often nicer than running it via init where it starts with root privileges.

See the manpage for crontab(5) for details.

It's not ideal for every usage, but it's often a good mechanism and it's VERY easy to do.

I think you need to add your script in rc.local all scripts run as root.

To save and exit with nano press Ctrl+X.

You need to run your command after network interfaces gets up. As described in this answer: https://unix.stackexchange.com/a/91264

Not the answer you're looking for? Browse other questions tagged command-line networking python startup or ask your own question.

2
Conversion of tiff image in Python script - OCR using Tesseract
1
How to execute this specific python script (attached in the question)
0
running a command at startup
3
How to run multiple Python files by running one terminal code?
2
Redirect python print output to graylog2
1
Problem getting script to run via cron tab
2
System beep from rc.local-scheduled Python script
1
Running a script after reboot, but before login