How to change the Dash Button in Unity Launcher?

I don't like the default Dash Button (also known as BFB in short of "Big Freakin Button") in Unity Launcher. It's pretty inconsistent with Faenza icon theme and I would like to change it. How can I do that?

It is configurable. The unity icons are in /usr/share/unity/4. Please browse this folder with the file manager to see the thumbnails.

Here is an example to change the look of the default dash home:

Definitely more customization could be done as long as you replace the correct files. Please backup the original files before making the changes.

BTW, maybe you have the question: how do you know the solution? I hit the same problem and tried to search all related files:

In 12.04 the Unity 4 icons have changed completely:

There are these icons which build the Dash button:

And these which aren't used:

They are very different in size and name. I think you have to edit every squircle_ file yourself with an image editor like Gimp.

You can see for yourself: nautilus /usr/share/unity/5/

If you revert the changes, simply reinstall unity-common using the following command:

If you wish to change only the Ubuntu 'Circle of Friends' logo in Dash Button, just replace one of the following png files with another png icon of 128x128 size:

I made a logo pack with icons collected from various sources like icon packs (Numix, Nitrux, Moka, Faenza and Captiva), Linux logo redesigns (by Reda Lazri, Dablim and Nattapong Pullkhow), official Ubuntu logos, Unity 7.2 and more. These logos are compatible with Ubuntu 14.04LTS "Trusty Tahr"'s Unity 7.2 and Ubuntu 12.04LTS "Precise Pangolin"'s Unity 5 and Unity2D. Should work with Unity 7.3 on newer releases like 15.04 "Vivid Vervet" and 15.10 "Wily Werewolf" too. 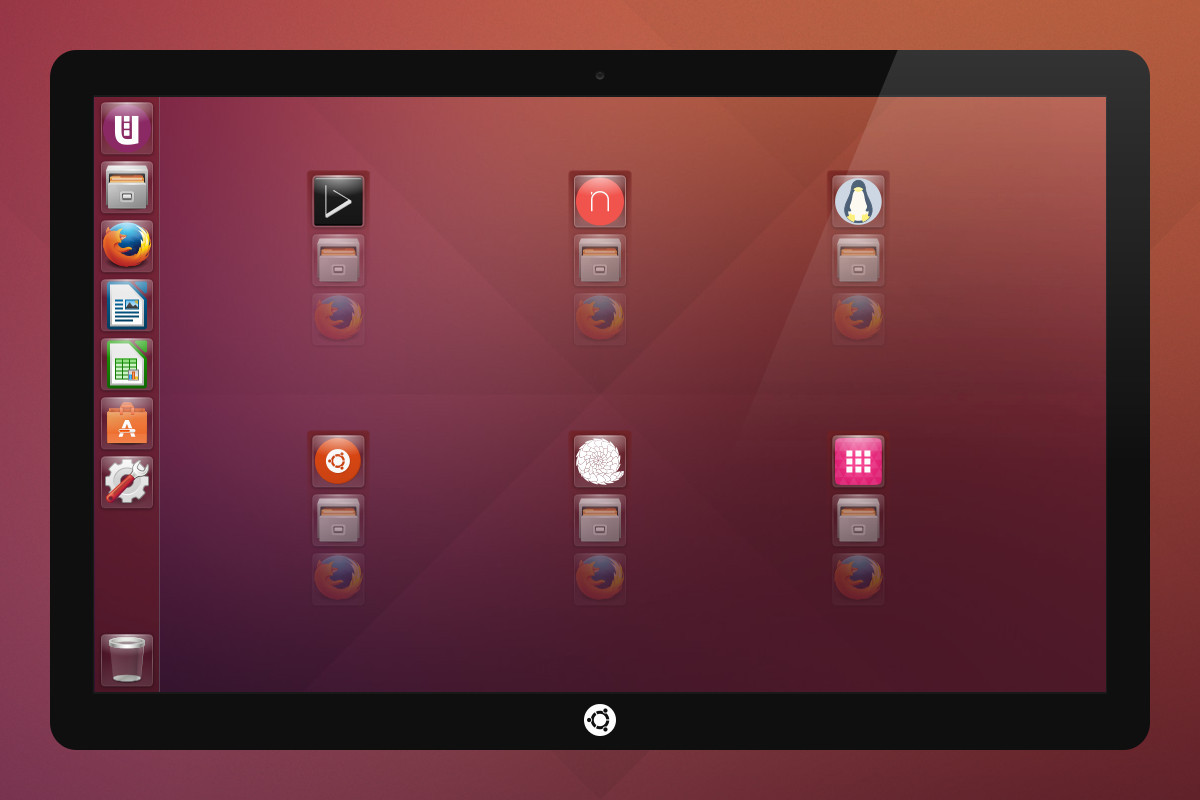 Unity 7.2 introduced support for customizing Unity Shell via a new Theming API. Dash Button (also known as BFB in short of "Big Freakin Button") is now treated the same as other Launcher buttons. So you can theme them all together by including the following files in the unity folder inside your current GTK theme:

You can either create new replacements for the above svg files or copy the unity folder from GTK themes that already implement Launcher theming (Numix, Moka Orchis, Delorean Dark and Ambiance Touch to name a few) and place it in any GTK theme in ~/.themes. Now use an app like Unity Tweak Tool and switch to the theme you modified.

Unity 5 doesn't have support for theming Unity Dash and Launcher. However, you can still alter it's appearance by replacing Unity's image assets. This is a hackish/modding method and isn't officially supported by Ubuntu. But it's the only easy way to modify Ubuntu 12.04LTS's Dash and Launcher. The Dash Button can be changed by replacing the following images in /usr/share/unity/5:

If you're unable to change the Dash Button by replacing these images, it's highly likely that your Ubuntu is running Unity2D desktop instead of Unity. Unity2D is a fallback desktop provided by Ubuntu 12.04LTS for low-end systems that cannot run the real Unity. Unfortunately, Unity2D doesn't use assets from /usr/share/unity, except for the BFB logo. To mod Unity2D, replace /usr/share/unity/5/launcher_bfb.png (for changing BFB logo/Dash Button logo) along with these files in /usr/share/unity-2d/shell/launcher/artwork:

I made some Dash Button mods for Ubuntu 12.04LTS's Unity 5 and Unity2D using assets from Unity 7.2, Aerilius's Ubuntu Touch mod for Unity 6 and Ubuntu Touch SDK. 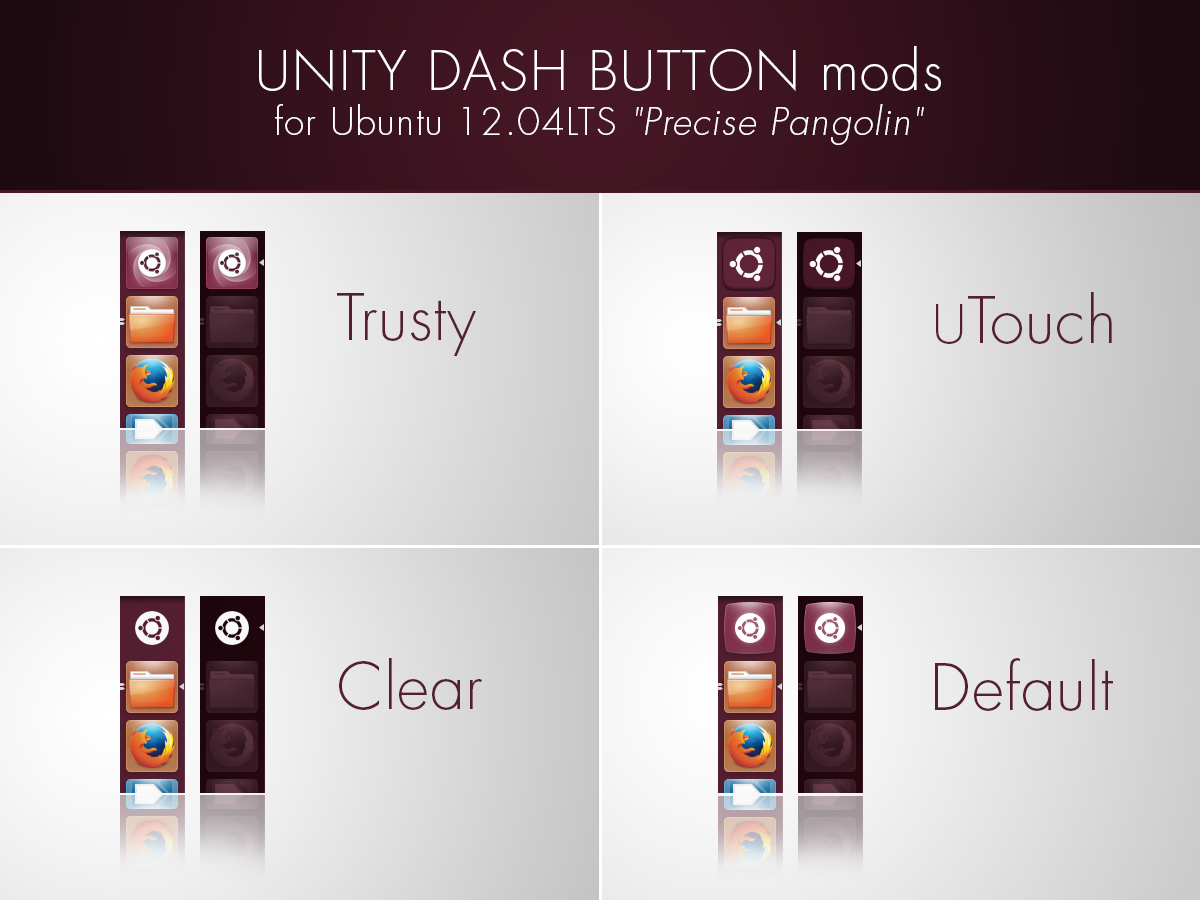 The other methods here did not work for me. I found the easiest thing to do was to simply open the image in GIMP and edit it:

You cannot remove it as it is a part of the Unity Launcher code, Mark Shuttleworth explained the reasons behind the Dash icon and its place in the Launcher in his blog post here.

The icons are at /usr/share/unity/4/. You can change them with your preferred png icons.

Not the answer you're looking for? Browse other questions tagged unity launcher unity-dash or ask your own question.

1
How to change the dash icon in Unity 15.04 to a custom .png?
0
How do you change the Dash icon in 13.04?
0
Unity Dash Button
1
How to modify unity icons
0
How do I change the software center icon in the launcher?
0
Is it possible to theme the BFB launcher background separately in Unity 7?

0
how to put dash button on dockbarx
2
Can I remove 'dash home' from the Unity launcher?
0
Is it possible to theme the BFB launcher background separately in Unity 7?
1
Disable Unity Dash icon (BFB)