I have a 32-bit installation of ubuntu 14.04 LTS on a Pentium 4 tower with RAID storage and total 3 network interfaces (2 wired, 1 wireless which happens to be a new Panda PAU03). I've tried about every answer/solution/suggestion on askUbuntu for about 6-7+ hours now, describing connecting wireless interface to a wired NIC on the Ubuntu computer which will then connect to/serve a router's uplink.

Internet access at this site is over a cell phone's wireless hotspot which really doesn't stink as much as it sounds like it would.

Earlier a Windows machine was responsible for making connection to the cell phone hotspot, and a wired Ethernet NIC with static IP on the same Windows machine provided the Up/Downlink to a router. This gave local devices both internet access plus LAN communications to one another, and as it turns out the wireless AP feature of the router covers a wider physical area than the little cell phone hotspot.

As folks noted elsewhere on askUbuntu, with Windows it was merely necessary to "bridge" (in Windows terminology which may vary from strict definitions) the wireless and wired interfaces. In under a minute the Windows-host was handling traffic between the WAN side of the router and the wireless adapter which supplied internet access; it all worked swimmingly.

Since we're talking about the same router, same wireless hot spot, and same server hardware (running ubuntu instead of Windows), I suspect there should be a correct software configuration available to do it. 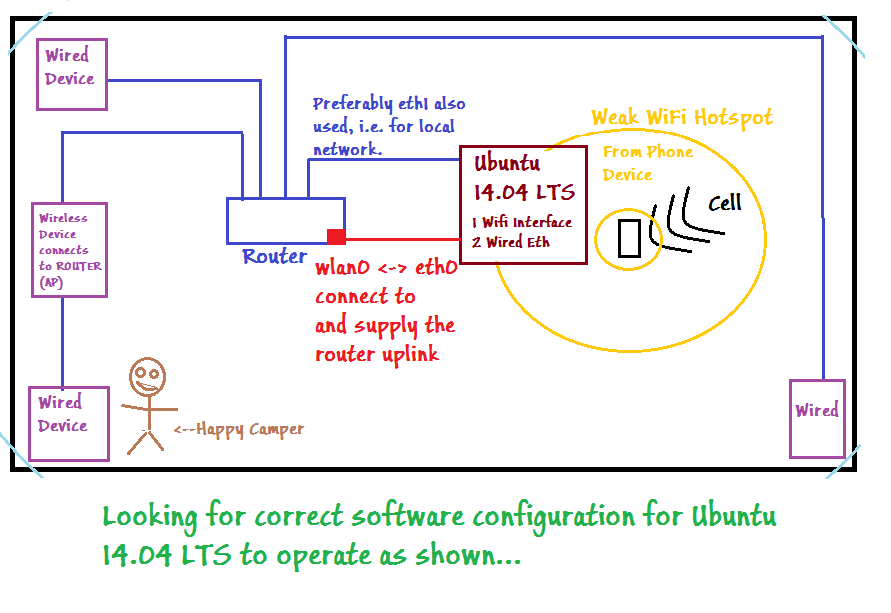 My own attempts so far have failed. I've approached this in many ways described such as: Network Manager with a bridge and assigned slaves; Network Manager with a connection marked as "shared to other computers" (which one person said would do some NATting); also tried setting up bridge in /etc/network/interfaces.

Generally in most of the approaches tried, I can reach the Router for administration over eth1 connection to the LOCAL side of the router. The Router uplink to eth0 card connection looks good. But as far as traffic flowing over the wireless adapter: nope. Nada. Perhaps I blew the configuration on every attempt. Meanwhile for example the answer at Share Wireless connection with Wired Ethernet Port suggested something (similar) was about as easy as Windows was.

Could be because I have flu these past couple days but after 8 (or now 10??) hours on this subject I'm ready to ask for the recipe, especially one specific to 14.04 LTS.

Since there is no short answer I recommend reading the Official Ubuntu Server guide, specifically on Networking and yes Bridging. Also, be aware of what your interfaces are actually named as they differ from the guides, versions, and answers on askubuntu.com. I've seen eth0, p2p1, and enp1s0 use this command to help start you out ifconfig -a. The guide below is from the server guide but it has excellent information which I commonly refer to. Good luck.

This is not an actual answer to your question but more of research help on finding the solution. Some sort of what I would do after reaching this point untill someone with more knowledge on the topic comes in.

Note that I am not an Ubuntu networking expert, but a self-taught user.

So, from what I understand after getting internet from the cell via WiFi, you want to:

There is a great answer at How to Connect & Share your Internet Connection (Wired & Wireless) that explains step by step on how to achieve the bridging of your WiFi to your Ethernet connections. It's not a way. It's THE way.

Note that after a test that does't work out you must undo your changes, because your next test might not work due to a previous setting of a previous solution approach.

Not the answer you're looking for? Browse other questions tagged 14.04 networking wireless network-manager or ask your own question.

24
How to set up dual wired and wireless connections?
5
sharing internet between network interfaces
1
No internet in 12.04 or 11.10 neither on wired nor wireless
0
Using both wired and wireless ubuntu 12.10 no bonding
118
How do I create a WiFi hotspot sharing wireless internet connection (single adapter)?
1
Wired connection and ad-hoc wireless at the same time