The 2TB disk that I use as an encrypted backup, is now reported by Ubuntu as being just free space. The encryption was setup as a LUKS encrypted device.

Note that there is no partition information reported (there was only one partition on the disk).

Device /dev/sdc is not a valid LUKS device.

Now luckily I have backups of the backup, so I can live with the data being going this time, however I need to know: What caused it and/or how I can fix it, because otherwise I can't trust my backup to be there in the future and I will have to find a different solution.

Edit1: Per request a screenshot of the Disks Utility: 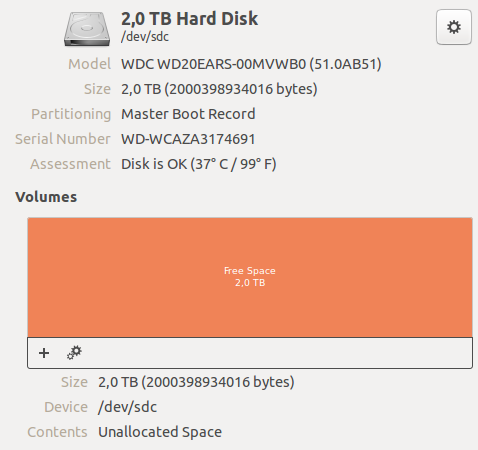 Making it very probable that the LUKS header, which was raw on disk, was overwritten by a bootloader. The default for Ubuntu without LVM seems to be to install a LUKS volume directly to the disk.

The system is actually dual-booting Windows 10 and Ubuntu (should have mentioned this, sorry!). To find out the culprit (hint: It's always Microsoft): we parse the strings in the first sector of the disk:

Which shows for the backup disk with the lost LUKS header:

The default boot drive has Grub 2 and for the same command returns:

Bingo! Now I know that I manually installed the Windows bootloader only to the Windows 10 disk, as I had accidentally overwritten it myself with a Grub bootloader and I know the LUKS volume was still there afterwards. However, I have run several automatic Windows 10 repair utilities, as my Windows 10 install keeps freezing/crashing. So it could be possible that one of them decided to appropriate the backup disk for an extra bootloader.

3
Deleted Windows Partitions on drive now what do I do?
1
unable to dualboot win XP with Ubuntu 13.04 on Asus Zenbook UX32a
0
Drive failure in Raid1. Can't replace
0
How to configure existing raid after upgrading to 14.04 from 11
0
Intel RAID5 array Shows < 50% space
1
Problem with partitions after reinstallment