How do I enable the pidgin system tray icon?

I want to enable the System tray icon for Pidgin in Ubuntu 11.10 (with Unity), but I don't see it.

I have to start it again and again from the launcher panel or from the dash.

Is there a workaround to show the system tray icon in Unity? I think it's the same behavior for Skype and some other applications also.

and remember to set the system tray to "always" in pidgin preferences. 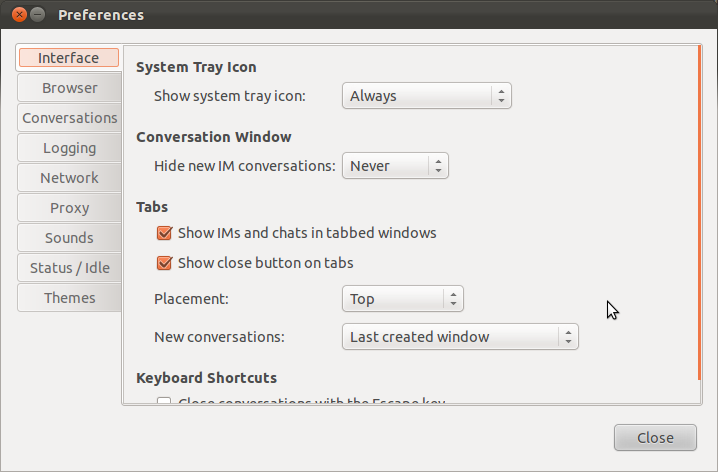 The migration of Pidgin to the new libmessaging-menu API, which caused this issue, is now done for Pidgin, but still under testing. Also, only a Ubuntu 13.04 package is provided so far, but since it does not introduce any dependencies on other stuff from 13.04, I was able to just install it from the PPA of the programmer who fixed it. According to his instructions, this is what fixed it for me:

You should now have pidgin-libnotify version 0.14-9ubuntu1. In addition, you have to add the following line to /usr/share/applications/pidgin.desktop:

Then restart Pidgin, it should now get an entry in the message indicator menu of the panel again, so that when closing its window, it stays running.

It is NOT necessary (any more) to install this repository as of May 23. Probably the updates have been officially included by now.

In 11.10 Unity has hidden the system tray access to pidgin under the messaging icon that looks like an envelope. If you click it, there should be an entry for Pidgin. Not exactly what you're looking for, but at least it's accessible somehow via the system tray.

As you can read on launchpad they changed the messages indicator and the pidgin indicator is not adapted to these changes. There is a ppa for the recent development but as it says on launchpad:

meaning we still have to wait for it :-(

If it's finally out you can add the ppa using

Under 13.10 the only solution to bring the sys-tray back is: