In Windows I like Screamer Radio, and I know that are others like RarmaRadio, programs which can record radio music and also save the proper titles, artist names, etc.

Is there such a program in Ubuntu?

I am looking for a native linux program, but Wine-based solutions are welcomed as a second choice. I will also try Wine myself and provide an answer.

Also, although I am looking for a program that would record songs with tag names, I am not aware of a Linux program that can record radio songs separately (split) even without tag names and titles. - So, a such program may deserve to be mentioned too.

Another basic desirable features that need mentioning are:

I have posted a complementary answer limited to the use of Windows programs in Wine. I expect a definitive answer on a native program. But I'll accept that as definitive only if the solutions proposed are at least as good as those accessible through Wine.

To Grap Streamripper in terminal just do this:

Streamripper and streamtuner2 are Linux applications that work in tandem, allowing you to listen and record streaming radio.

Streamtuner2 is a basic application used primarily for playing internet radio from any number of sources including Xiph, basic.ch, punkcast.com, Google Stations, Live365, and SHOUTcast. It will use streamripper to record and an external player to play a stream. 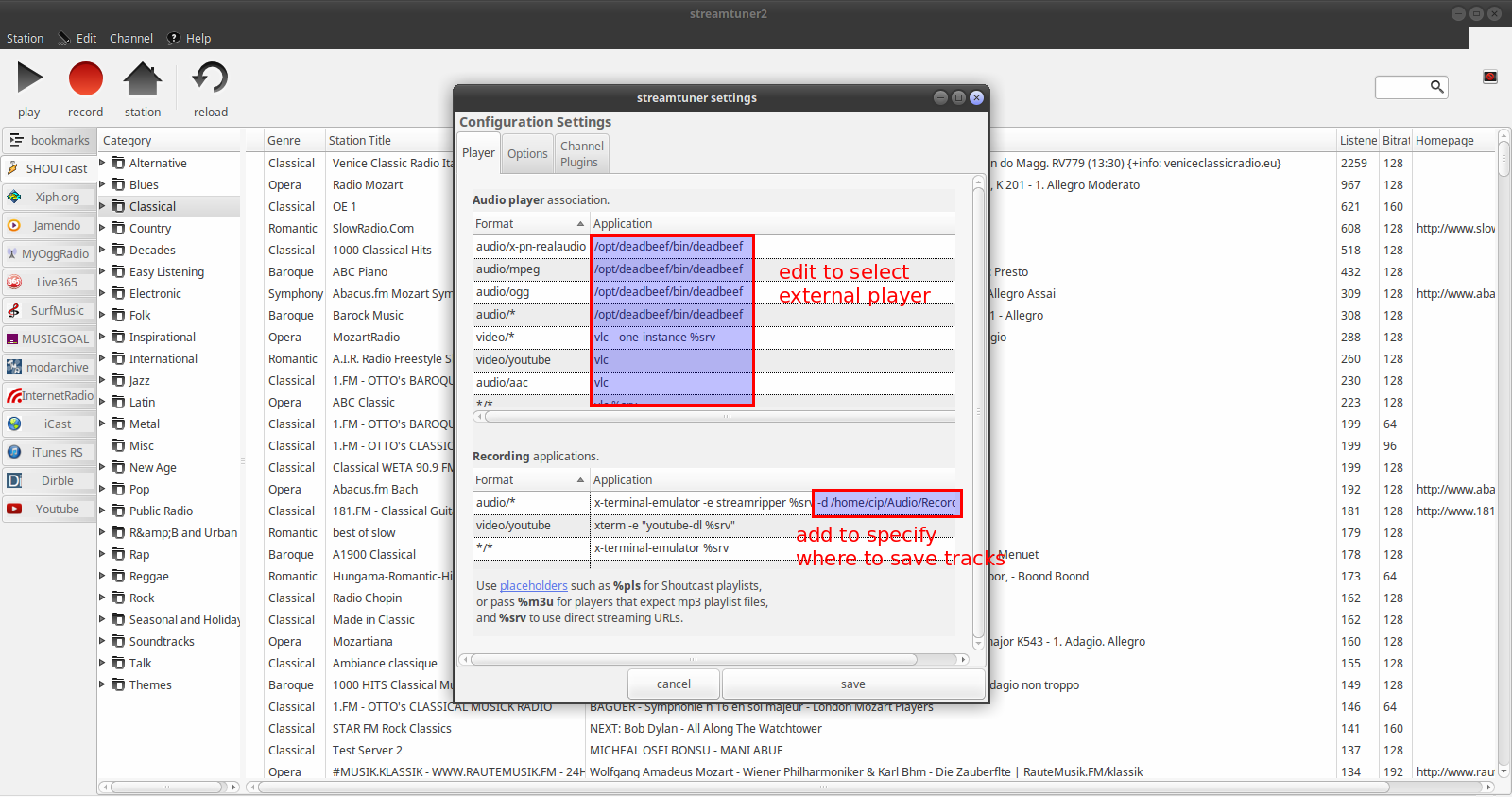 Streamtuner2 can add favourite stations to bookmarks. New stations can be added by selecting some station, right-click, Edit, 'New', and, after setting a new name and URL, OK and then Reload button.

Clicking the record button after selecting a station will run streamripper in a terminal window and by default each track will be saved separately in the Home folder.

To set custom folder for recordings in Streamtuner2, under 'Edit-Properties-Recording application', edit the line under 'Application' by adding -d path_to_folder at the end (like x-terminal-emulator -e streamripper %srv -d /home/user/Audio/Recordings). There can be added many other custom commands that streamripper allows - see below on more options.

Search function doesn’t work as it should.

To save in a custom folder by using just streamripper in a terminal (CLI, without Streamtuner), open the terminal in that folder.

Multiple instances of streamripper (that is recording of multiple tracks) can be run at the same time in separate terminal windows. 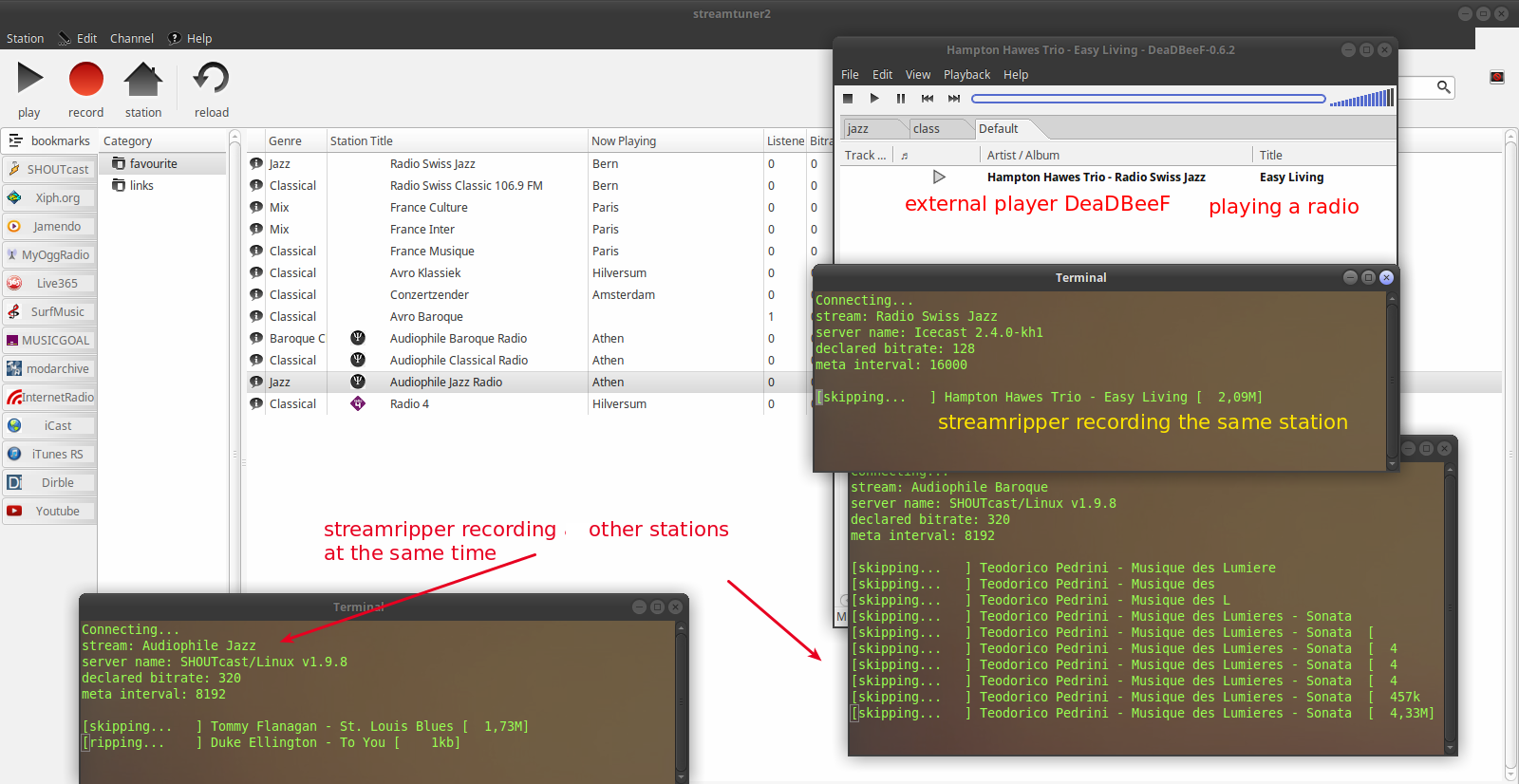 On more options in Streamripper there are Ubuntu Guide, Reference,Tutorial, Ubuntu Man Page, My Ubuntu Blogspot.

Streamripper sits stealthily in the terminal recording and parsing all of the music piped through your system into MP3s. Leaving Streamripper running all day will rack you up a healthy dose of your favorite tunes. By itself streamripper is able to record streams with the command:

What is particularly nice about the combination of Streamripper and streamtuner2 is that once you choose a station to record, you can exit streamtuner2 leaving only a tiny, non-obtrusive terminal window for Streamripper.

This complementary answer is limited to the use of Windows programs in Wine. I expect a definitive answer on a native program.

My favorites in Windows are RadioSure, Screamer Radio and RarmaRadio. I have tried to install them in Playonlinux but they don't work. Some tweaking with Wine settings or versions may fix them but that's beyond my ability.

After testing most of the programs mentioned here and here, I ended up with 3 programs working in Playonlinux. 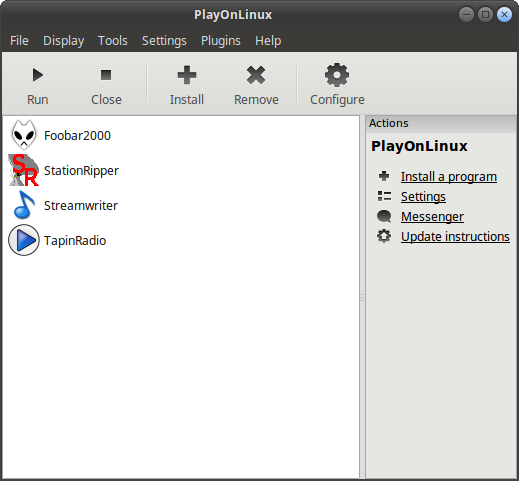 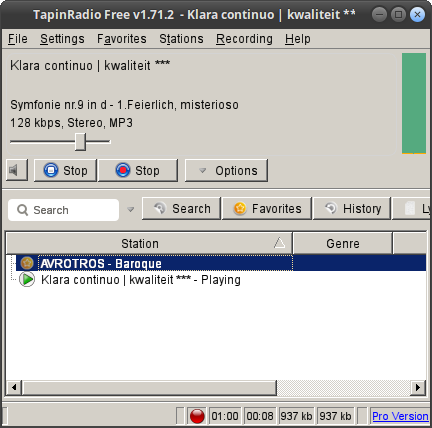 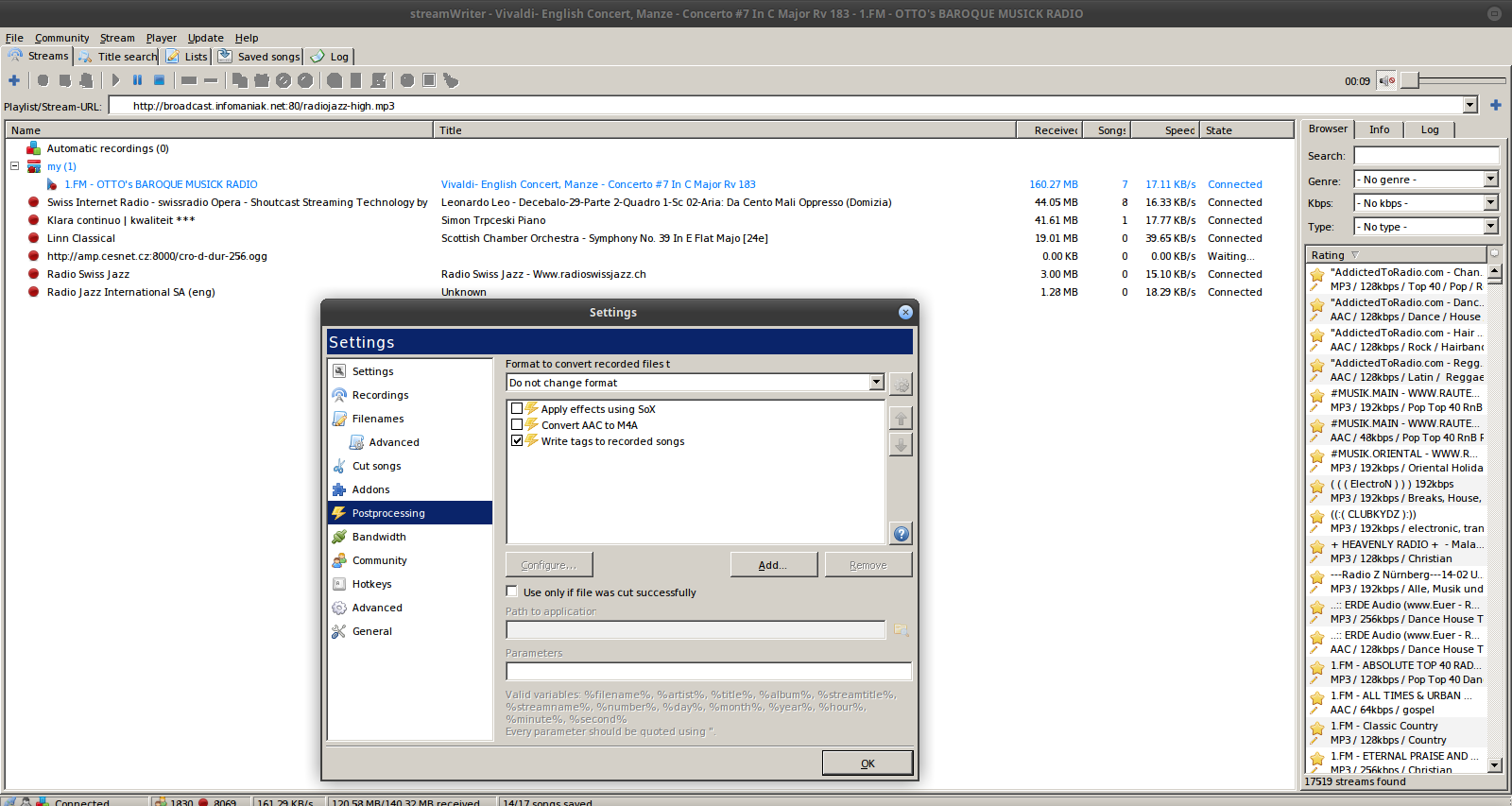 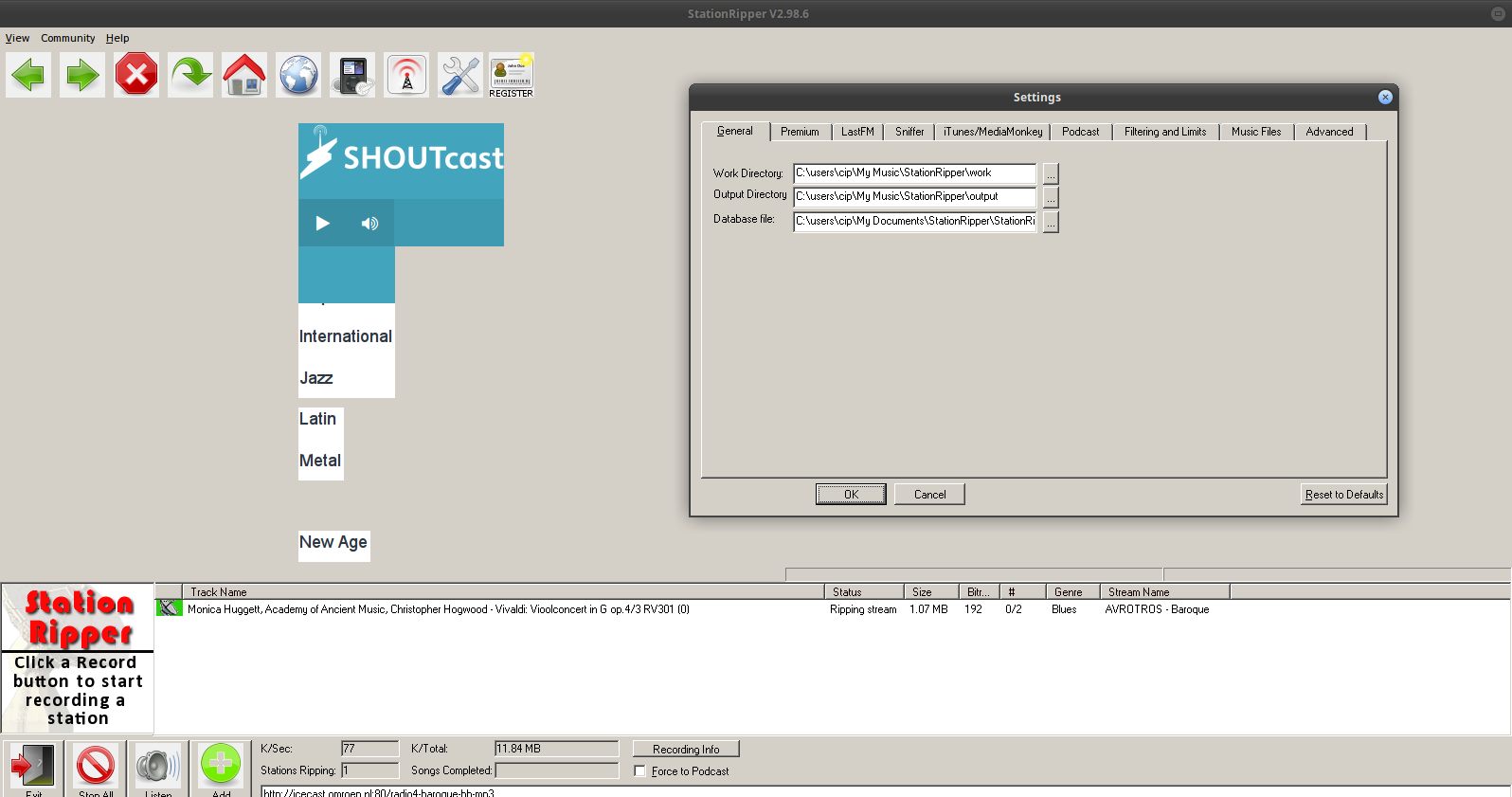 I mention StationRipper just for reference - but I don't recommend it in Linux/Wine.

The other two work great.

TapinRadio is very easy to use and straightforward out of the box; it can record only one station at a time and save the track as mp3, wma, aac and ogg.

StreamWriter has more features: it can record multiple streams at the same time, can schedule recording of specific station, tracks, artists, etc. It can convert to mp3, aac and ogg, or it can avoid changing format. Two issues need attention though: 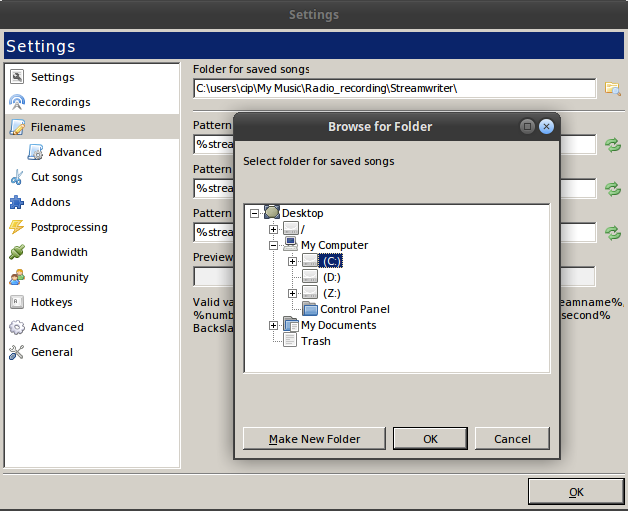 Changing that to Z: gives an error on lacking disk space.

The Exaile music player for a long time has had the ability to use Streamripper built-in. Just install Exaile and Streamripper, then enable it in the preferences gui of Exaile,you'll find it with all the other plugins. That's it, just hit the record button while listening to your favorite radio station.