How to get rid of the DNS Unlocker adware?

From this morning I'm witnessing unfamiliar ads apearing in different pages while using Firefox which they say "Ads by DNSUnlocker". 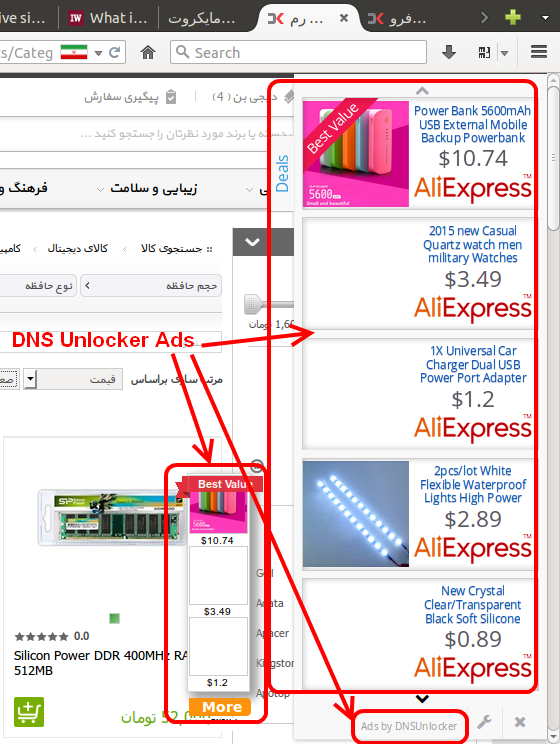 I searched for it and it seems this is a known adware infecting Windows PCs and there are several steps to get rid of it (source-1, source-2).

Since I'm on Ubuntu I believe I must've been infected by browsing to a malicious URL, or installing an untrusted Firefox add-on, or maybe this adware also has a Linux version!

Anyway, how can I get rid of it? I checked my Firefox add-ons and there was nothing unfamiliar. One of the steps in the Windows solution is to RESET Firefox and Chrome settings!

I really don't want to reset my settings since I need them and redoing all the preferences is not easy. I need some help to disinfect my system and preferably, find the root cause of it.

I closed Firefox, and opened Chromium and the ads didn't show up in the same websites I visited in Firefox. Then I opened Firefox again and unfortunately the ads were back again. So it seems the problem is specific to Firefox.

Also it might be worth mentioning that in both Firefox and Chromium I've had the 'Adblock Plus' add-on activated for years and it works great, but since yesterday I'm witnessing these strange ads poping up in some webpages.

I opened Firefox in safe-mode (all add-ons and custom settings disabled) to see if the ads will go away, but unfortunately the ads also apear in safe mode! I guess this means that even reseting Firefox won't fix the problem!

What other explanation could this have? Before this safe-mode test, I was almost certain that the problem was with Firefox being infected, but after this I don't know what's going on! Could my system be infected with a Linux-compatible malware?!

So I figured out how to get rid of this pest. I thought using Firefox's "Safe Mode" was a true indicator if the infection was related to Firefox or not. But it turned out to be false!

The solution for this was to clear the .mozilla folder in the home directory (which is hidden), and it will make Firefox have a fresh start. Of course, this way you will lose all the bookmarks, saved passwords, sessions, add-ons, etc. But at least it gives you a clean browser back again.

Some of these can somehow be saved to restore again, like bookmarks can be saved by exporting them to JSON. Others (such as the add-ons) I don't recommend to backup and I recommend to reinstall them after reseting Firefox.

Not the answer you're looking for? Browse other questions tagged firefox malware or ask your own question.

5
How can I re-enable the global menu in Firefox?
0
Chromium infected with CloudScout on Ubuntu 14.04
5
An adware has infected 2 browsers
3
How can I get rid of Shopping Assistant AdWare on my firefox?
3
Searching source of Malware in Chromium extensions
1
FIrefox and Chromium use all RAM and pc freezes
25
Firefox freezing with 100% CPU usage for 30 seconds when launching Chromium