How do I install the latest NVIDIA drivers from the .run file?

This is what I am trying to do. I downloaded the latest driver for my VGA from http://www.nvidia.com. The installation needs the X11 to be shut down, so I log out of my account, then press Ctrl+Alt+F1, then log in with my username and password, then run the command

in every possible way, I have even tried CHMODing the package with 777 permissions, but still I'm getting the

error. Any help would be greatly appreciated.

Make sure that no proprietary drivers are installed. If they are, un-activate them - otherwise, they WILL cause problems.

This is the procedure I use:

The installer will then complain about Nouveau needing to be disabled. It will do so, then you will need to restart your PC. You will then have to redo the above mentioned procedure again to restart the installation.

If you have another driver installed, this installer will uninstall it for you.

Works every time for me.

For the test I took one of the latest Nvidia drivers released by official Nvidia.

before going to do anything backup your current nvidia configuration simply run:

Disable conflicting software (recommended!) to avoid any problems during installation. Open or create the /etc/default/linux-restricted-modules-common file with an editor, in Ubuntu use:

and paste or replace a line:

Done! Now remove what is installed:

login to TTY terminal (Ctrl+Alt+F1) and remove and purge your current configuration doing next commands:

or find the right ones for your platform with command uname -r for example:

(removes nvidia-common for some might need to sudo apt-get install ubuntu-desktop to bring it back manually, wasn't necessary for me)

After you finish with this one, you should also blacklist the nouveau driver by editing this file:

…and add these lines at the end:

And you can also disable the Kernel Nouveau by typing these lines in a terminal window:

or you can remove nouveau from the system:

(WARNING! removes open-source video driver from the system! the step is optional, I did this to prevent all conflicts with Nvidia do this at your own risk or leave it alone if you're not sure)

Before continuing you can also install dkms on the way.

(*DKMS is a framework designed to allow individual kernel modules to be upgraded without changing the whole kernel. It is also very easy to rebuild modules as you upgrade kernels.)

Next when all is done, let's install the driver. Navigate to the location where you downloaded driver at, for example:

and make it executable and run:

Click Yes (commonly) during installation pop ups and at the end of installation wizard you'll be asked if you want Nvidia to configure and activate driver for you? Click Yes!

Now you have to bring back the Display Manager:

When logged in do not run sudo nvidia-xconfig as it's already been configured just run gksudo nvidia-settings.

The driver works basically on all Nvidia video cards including old ones.

If for any reason after reboot you are not able to login or get stuck during boot make sure you followed all the steps if you did and still got problems login to Recovery Mode press and hold Shift enter Recovery Mode and start Failsafe boot for some reason your xorg.conf maybe named differently even when you run sudo nvidia-xconfig it names itself for example XF86Config it's actually good working configuration and if needed you can just simply rename it:

And reconfigure it with:

now you should be at the login screen, enter your initials and when logged in run:

When trying to start X, if you get an error about nvidiactl (you will need to see the X log), try the following:

If you want to go back to the Restricted Manager method after performing the above instructions, do this:

If the installer fails, go through the following checklist:

Sometimes it might not work, e.g. with Ubuntu 14.04 LTS, currently there are incompatibilities that may occur with newer linux-image kernels to some video cards and after reboot you might be left with a blank screen.

What you can do then is try this:

How do I make Nvidia driver working after the kernel update in 14.04?

When you have manually installed Nvidia driver in 14.04, if the kernel got updated then do not reboot after an update otherwise you will boot to a blank screen.

What shoud I do?

If the workaround with dkms didn't succeed, you will need to re-install the driver. Launch a console Ctrl+Alt+F1 and type:

Login to your account, open a terminal Ctrl+Alt+T and type:

Done. You should login as normal now.

In Ubuntu, there's open source driver called Nouveau. Nouveau makes some troubleshooting in NVIDIA driver installation. Should it to be remove and clean the configuration and comes with NVIDIA driver only for better experiences.

this is way i used to do maybe different with others :

Login and then stop GUI

for the last restart it

This is a first step for beginners to check extra drivers.

I hope this answer helps anyone who stops by here: Just go to System Settings -> Software and Updates -> Additional Drivers and install the latest NVIDIA driver. Restart your machine afterwards

If after these steps you still do not see your NVIDIA driver you may want to try one of the terminal answers above. 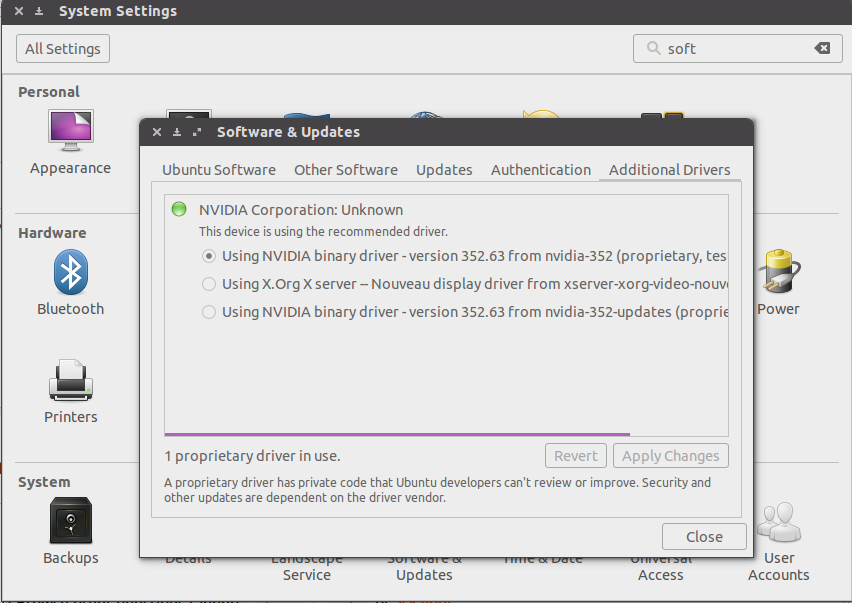 Trevor and obysr's answers are correct but for me I had to do an additional step as I could not get rid of the Nouveau:

1
how to close x server?
0
How do I install NVIDIA drivers in Ubuntu GNOME 14.10?
0
Installing Nvidia driver Ubuntu 12.04
517
My computer boots to a black screen, what options do I have to fix it?
173
Is a NVIDIA GeForce with Optimus Technology supported by Ubuntu?
80
How do I install additional drivers?
11
Ubuntu won't start after updating nvidia drivers from X-swat PPA
6
Install NVIDIA Drivers
4
Resolution 640x480 after installing Nvidia display and CUDA drivers for GTX 750 ti
2
Ubuntu 14.04 not logging in after NVIDIA update
See more linked questions