We just launched a new product: Collectives on Stack Overflow. How do they work? Listen to learn more.

How am I supposed to use nvidia-prime?

I uninstalled all nvidia-drivers because I was experiencing a lot of bugs and I read here and there that they are not supposed to work with Optimus without either bumblebee or nvidia-prime.

As far as I understand, nvidia-prime would allow me to have the NVidia GPU always on. And to choose between that or always off (i.e. always use Intel)

So now I installed nvidia-prime with

What am I supposed to do now?

I thought nvidia-prime provided a graphical interface which would allow me to choose which graphic card to use, and even to install the needed nvidia drivers.

By typing "nvidia" in the dash, nothing shows up. From a terminal, the only command available starting with "nvidia" is "nvidia-detect" which just prints "none".

So, I installed nvidia-prime, how do I use it?

You need to have both Nvidia proprietary drivers and nvidia-prime to get it working. This can be done by running

Then you will have Nvidia X Server Settings in Dash. And there you can find PRIME profiles. 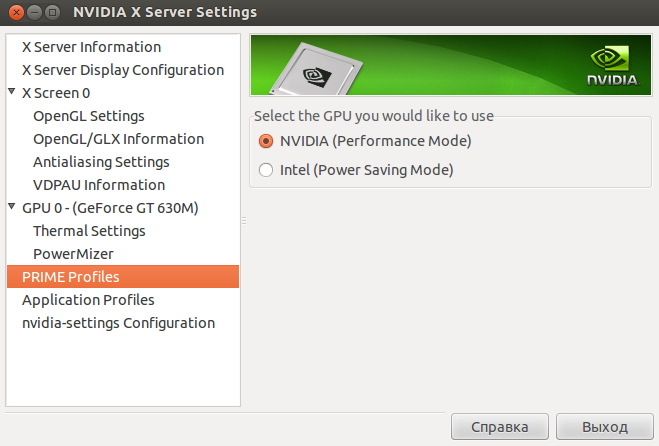 you can also do

(or nvidia or query)

Ubuntu 18.04.1 repositories have been updated with a partial backport of work from 18.10 which dramatically improves the Optimus experience. To call it a night and day difference doesn't do it justice.

But when you are in intel-only mode, the nvidia GUI control panel does not launch. This will fixed since it's not a problem in 18.10, but until then, use the command line approach. I suspect the fix won't arrive until 18.04.2

Not the answer you're looking for? Browse other questions tagged nvidia nvidia-optimus nvidia-prime or ask your own question.

15
What is the use of nvidia-prime?
0
Unity gone after installing Nvidia Prime
0
Several problems with NVIDIA prime
11
How to use CUDA with NVIDIA Prime
0
Can I use an external monitor with nvidia-prime
7
'PRIME Profiles' tab missing in NVIDIA X Server Settings (Ubuntu 16.04)
1
Nvidia prime or optimus