Nautilus-Open-Terminal tries to open ZSH instead of bash

I recently tried zsh as a shell but didn't like it much. Then removed it and I still continue to use bash.

When I was using bash, I had this cool script 'nautilus-open-terminal' which lets you open a terminal in the directory you are currently in, with right-click to an empty area in nautilus.

However, after removing zsh from my computer, I noticed that nautilus-open-terminal was not working. When I press 'Open In Terminal', the terminal was being opened for a split second and immediately closing itself.

To avoid the terminal to close itself, I set the terminal's preferences as [When Command Exits: Hold the Terminal Open] 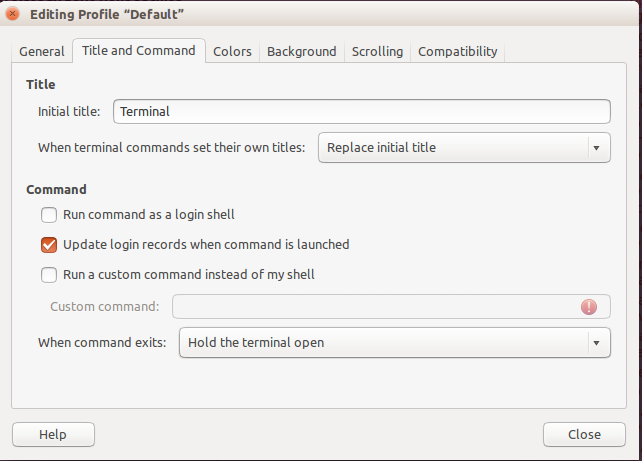 As you can see in the above link, Hold The Terminal Open is selected

And after doing this, now I could see the problem. When I pressed 'Open In Terminal', I saw this screen:

Nautilus-Open-Terminal tries to use zsh

To conclude, my nautilus-open-terminal tries to use zsh instead of my bash; therefore it crashes since i do not have a /bin/zsh file anymore.

This problem of 'nautilus-open-terminal immediately closes itself' is quite common as far as I can see. However, from the posts I have seen, people talk about different issues that cause the same problem that I have.

How do I reconfigure my nautilus-open-terminal so that it will use the bash instead of zsh?

Thank you for your interests.

Make bash your default shell by:

then log-out and log-in. Now, nautilus-open-terminal will use bash.

Not the answer you're looking for? Browse other questions tagged bash nautilus zsh or ask your own question.

37
ZSH is not launched while opening a new terminal with `gnome-terminal`
2
Let Nautilus open script as Terminal window
0
Zsh doesn't see some CLI
4
Alias to open a graphical Program (nautilus) opens it in Terminal too
6
How do I enable zsh package suggestions as in Ubuntu bash?
1
Nautilus File Manager closes immediately I open it
2
Nautilus opens the home directory only, then proceeds to hang, and make the zsh terminal unresponsive to commands
1
Nautilus open text file with vim and make terminal persist after closing