Removal of unity-preferences makes launcher not show up

In 11.04 I used the unity-preferences tool (called menu and launcher in the the dash I believe) to set Unity to only reveal when the mouse was moved to the upper corner. I liked this method better as there was less of a chance of accidentally opening the launcher.

Now in 11.10 unity-preferences is gone, and the corner no longer opens up the launcher. That's fine, but now the launcher won't open at all. I can't hover over the edge of the screen to open the launcher. I'm guessing something is still respecting the "corner only" launch option I had set previously, but the new window controls are preventing that from triggering the launcher. And now that unity-preferences has been removed, I have no way to set it back.

I looked through all of the settings for unity in gconf, but couldn't find anything pertaining to this specific setting, only the compiz only settings.

Does anyone know where the old unity-preferences tool stored its setting? Or could this be a different issue?

To adjust the reveal mode of the Launcher, you can use compizconfig-settings-manager

. To install CCSM, run the following command from the terminal:

In CCSM, look for Ubuntu Unity Plugin and click on the option for Reveal mode. Using the Reveal mode, you can choose which part of the screen should trigger the launcher. 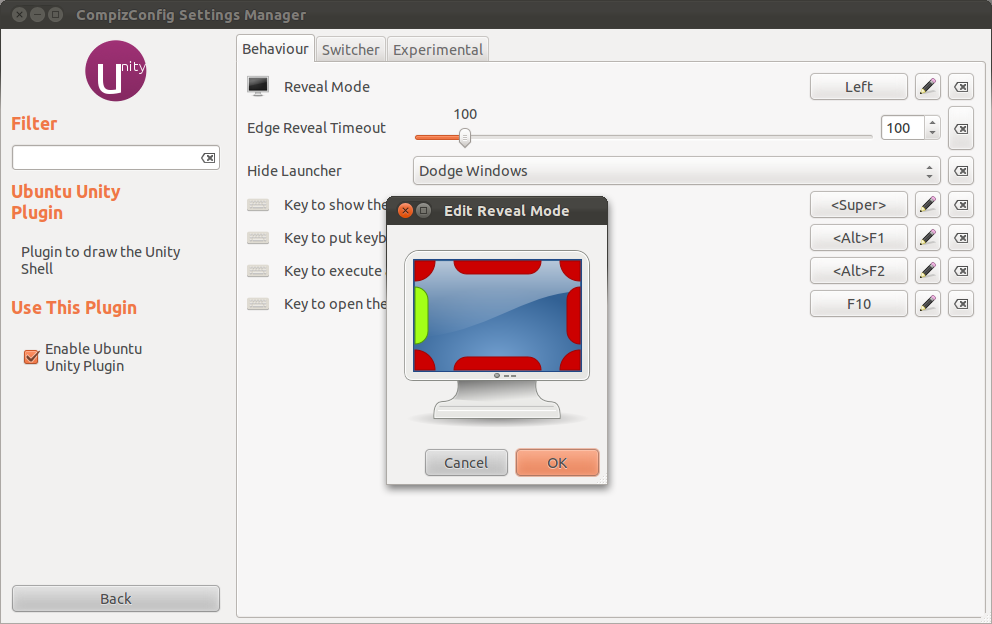 The workaround was to switch to Unity 2D until a fix was issued. I did that and got it back, but then switching back to 3D also seemed to start working again. It looks like today's updates contain the fix because it's staying enabled in 3D for me. Try running updates and see if that helps. The launcher menu is gone, but CCSM that Jokerdino suggested works.

Not the answer you're looking for? Browse other questions tagged unity 11.10 or ask your own question.

115
How can I configure Unity's launcher auto-hide behavior?
10
How can I remove the Unity Launcher?

2
Require button press to open Unity launcher to resolve usability issues
15
What exactly does GRUB_GFXPAYLOAD_LINUX=text do?
2
Dual monitor Unity launcher opening on wrong monitor in 11.10
4
Set launcher reveal mode to Intellihide
0
ubuntu 14.04 no system preferences in Unity
0
Unable to hide the Unity launcher and set its reveal sensitivity automatically on startup of an Ubuntu 14.04 machine
4
How to put unity launcher on in different positions on different monitors