How to prevent launcher from influencing window placement?

As I understand it, in Ubuntu 11.04 setting the AutoHide setting on Compiz Config - Unity (see here) not only hid the launcher but prevented the launcher from influencing window placement.

How can I stop Ubuntu 11.10 thinking that the launcher takes up desktop space when placing windows?

The following screen shot shows what I'm talking about. I've just opened chromium and the window is indented by the width of the launcher. 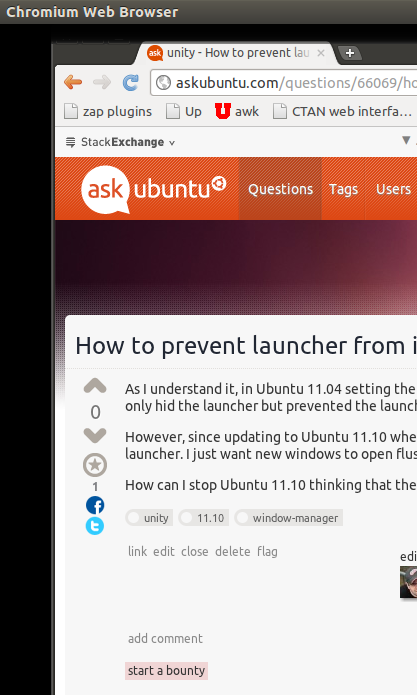 If you want all your windows to be initially placed in the top left corner, the follow settings in ccsm > Place Windows makes it work for me: in the fixed window placement tab, add an entry for Windows with fixed positions and set the type to any, x to -1, y to 48 and untick keep in workarea. It's quite a hack and the window is 1px off screen (which you'll hardly notice).

I usually use the ccsm Grid plugin to place my windows, since I normally want them side-by-side anyway i.e. Alt-Kp-4 for left tile, Alt-Kp-6 for right tile etc. Grid ignores the launcher if set to auto-hide.

Just move the window to the left, and the launcher will go away. It is only auto-hidden when something else wants that space.

I wonder if this worth a shot:

2
How can I open two half-screen windows in a row without overlapping?
3
How to make Unity Launcher menu be almost always hidden and not influence window placement
2
How do I hide the Unity Launcher when Clementine is running?
4
Resize window to half width
6
Why don't Unity's window placement shortcuts work?
1
strange window positioning after launcher click
8
Xubuntu tiling: how to maximize terminal window for partial tiling?