How can I use two Firefox profiles?

I run Ubuntu 14.04 and want to use one installation of Firefox with two different profiles for the same logged in Ubuntu user.

How can I set this up, so that I may easily launch both profiles from the Unity launcher?

Excerpt of the command-line options from man firefox:

So you just need to start Firefox with one of those parameters by either using a terminal, the Alt+F2 HUD, from the launcher icon's context menu after editing its configuration file, which I will describe below.

Set up a new profile:

Set up your launcher icon to access those profiles from the context menu:

I think Firefox Profile Switcher is your answer!

You can then create Profiles for each task, all in the same homefolder (if you must). 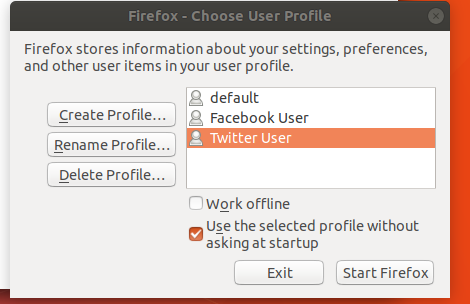 To have them all running at the same time you'll also need to add --new-instance to the command.

And finally, you can select one of the predefined themes via the Customize Menu and Toolbars option :

Open the customization dialog and on the lest you'll see Themes as drop down menu.

You'll have to this for each social media account, I guess.

or write a small wrapper script and replace the symlinks.

enter the following with the correct paths

As pointed out by the user muru in the comments below, it is not necessary to replace the original link, as originally suggested

The path to the firefox link might differ on your OS, you can find it out with

then remove the old link

link it to the correct path

I would propose the Multi-Account Containers extension, an official Mozilla-made addon. The use-case you described is precisely why it exists: 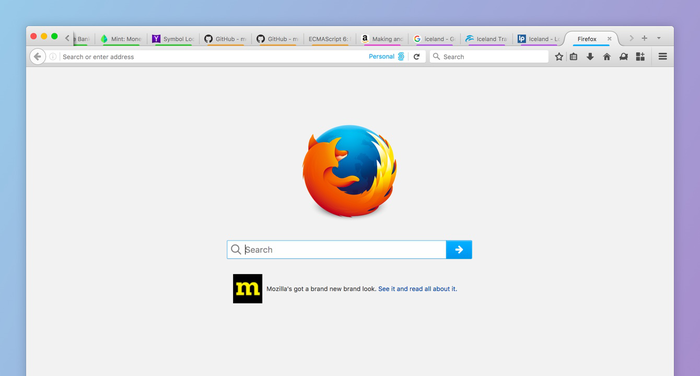 She can create containers for each one of her account sets, and choose an accent color. This accent color will show up below the title of every tab, indicating which container it is on:

Tabs by default do not open in a container, you create them by long-pressing the "new tab" button.

Not only are the containers easily identified, tabs are just normal tabs, you can put them all on the same window. (with multiple profiles, you would not be able to have tabs of 2 profiles in one window).

Additionally, the browser configuration and installed plugins are still the same (since it is just one browser), which reduces the "WTF" factor.

You may then create, select, and manage your profile(s). 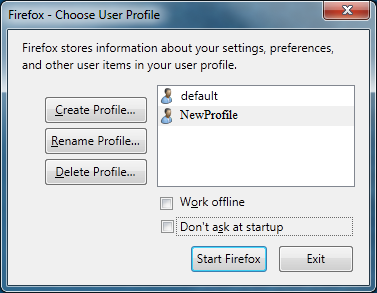 See also How to create a new Firefox profile on Windows? (kb.mozillazine.org).

I could not find a similar page for Linux, but the options and screens are nearly the same.

To create an icon, create a desktop file as described in How to get my custom .desktop file into the unity launcher? (askubuntu.com)

Use firefox -P YOURPROFILENAME to start Firefox with the given profile.

You may find more info about Firefox's command-line parameters by reading its manpage (type man firefox in terminal).

I will add this in case you want 2 firefoxes. The end result will be a normal firefox and one installed in /opt/. Both can be started at the same time and are totally separated from each other.

Same as above, and if interested in learning why one should/could have several profiles, the following link has some additional information:

"At the top of the Firefox window, click on the File menu and select Quit. In Terminal run: firefox --ProfileManager

If the Profile Manager window does not open, Firefox may have been running in the background, even though it was not visible. Close all instances of Firefox or restart the computer and then try again."

In a terminal type

and create a new profile. Then start the desire profile with

The easiest way to manage profiles in firefox is installing the multifox addon.

It works like profiles in Chrome but more smooth and better.
You can open up different tabs of the same site with different logged in users. 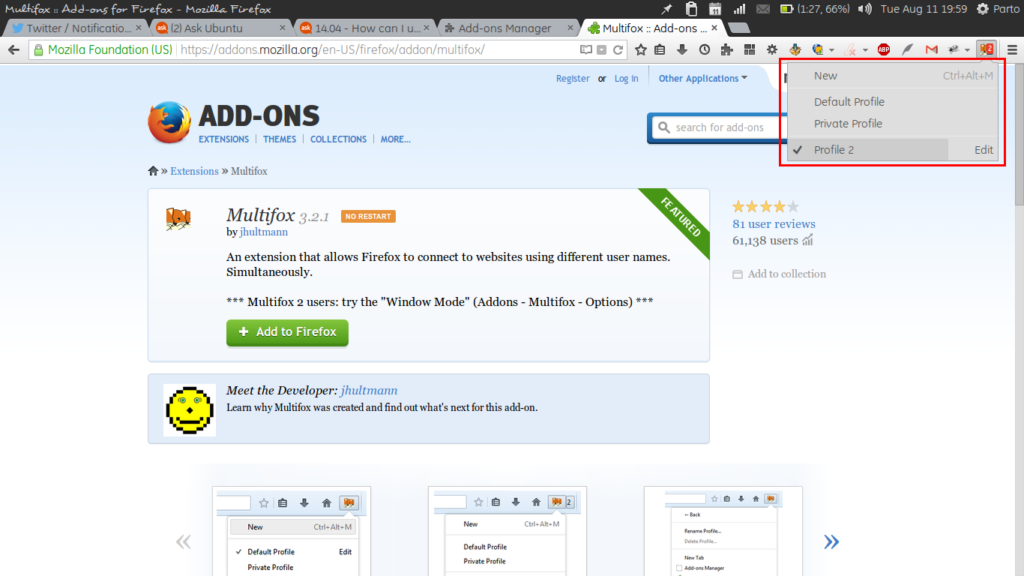 You can open a new private window in Firefox (much like Chrome's incognito window) and use it simultaneously with normal browser with different accounts.

Not the answer you're looking for? Browse other questions tagged firefox launcher .desktop or ask your own question.

15
How to install several independent firefox instances on ubuntu?
462
How can I edit/create new launcher items in Unity by hand?
287
How can I create launchers on my desktop?
4
How to get my custom .desktop file into the unity launcher?
2
Launcher for Firefox starts default profile instead of the specified profile
0
i3wm: Two separate Firefox profiles in rofi + assign each profile to a different workspace