i got a problem i can't figure out how to fix.

I got 11.10 Oneiric (AMD 64) on a Lenovo s205 with AMD E-450, ATI HD 6320 Graphics and AMD Catalyst 11.8 driver. The perfomance is not terrible but worse than the standard driver Ubuntu boots with before the proprietary ATI driver are installed. When dragging windows over the desktop they don't move smooth and wacthing videos in Totem Movie Player i get black frames every 3-4 seconds. Also i got a "AMD Unsupported hardware" water mark in my lower right corner of my desktop the hole time. In Ubuntu "System Info" in Ubuntu system setting it repports graphics driver to be "VESA: Wrestler" I tried the "ATI/AMD proprietary FGLRX graphics driver (post-release updates)" but it can't install. The 11.9 driver from AMD installes but does not work with Unity, the launcher are missing. If I remove the ATI/AMD proprietary FGLRX graphics driver, Unity launcher are again missing when restarting.

Will installing this driver work with Unity and make playback smooth like Win 7?

AMD support for the e-450 is not ready yet! They should hopefully be releasing some compatible drivers in the near future. 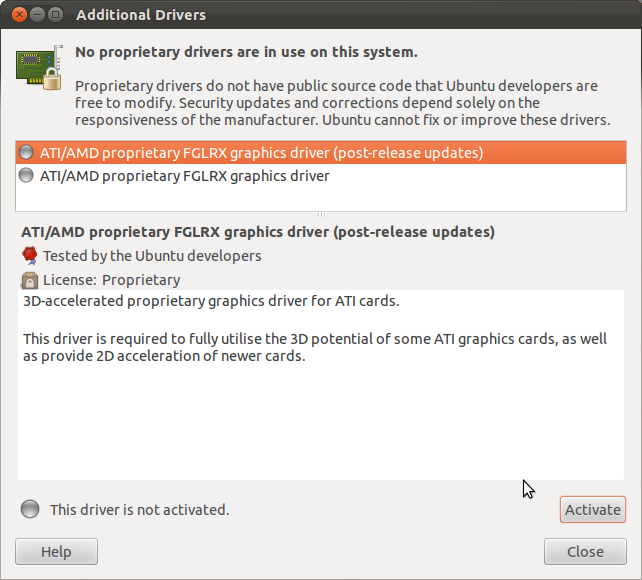 Not the answer you're looking for? Browse other questions tagged 11.10 ati or ask your own question.