When I run sudo apt-get update on Ubuntu 15.04, I get the following (shortened) output:

Then it gets stuck and won't continue until I interrupt it with Ctrl+C.

When I do sudo aptitude update instead, it also hangs at the same position.

After deleting the cache with sudo rm -rf /var/lib/apt/lists and running sudo apt-get update again, I still get the same results.

However, it seems to have successfully updated the package index files after running sudo apt-get update and interrupting it when it gets stuck, as I still can run apt-get upgrade and receive new updates, or apt-get install. It just does not finish the apt-get update task...

A reinstall of apt with sudo aptitude reinstall apt and a reboot afterwards did not change my situation either.

What might be the problem here and how can I fix it?

PS: The full output of apt-get update recorded with script that also shows those dynamic lines may be found on pastebin.

After letting it run for hours, it actually finishes! The repositories that cause the problem are various https://repo.tox.im lines. Here what appears after loooong times of waiting between each line:

After this, the process terminates correctly without having to interrupt it. So what can be the problem with that repository and how may I fix it?

After having waited for the command to complete for hours, I saw that it hangs on all tox repositories.

I checked their main page and found out, that the whole infrastructure including repositories, wiki and main site moved to a different domain. That's why the old URL is not alive any more and why apt-get update is timing out.

On their new wiki, they gave the following (slightly modified) script to install the actualized repository:

I executed those lines and now all problems with apt-get update are gone!

Unfortunately, the new repository does only contain 64bit builds of qTox yet, so I will have to live with that package being hold back for a while, until they also compile it for 32bit machines!

The last repository update fixed this and qTox is now available for both architectures again! :)

I recognized this problem from time to time and from amchine to machine. I got rid of it by simply changing the to main mirror server - called in the german version you are using "Haupt-Server" 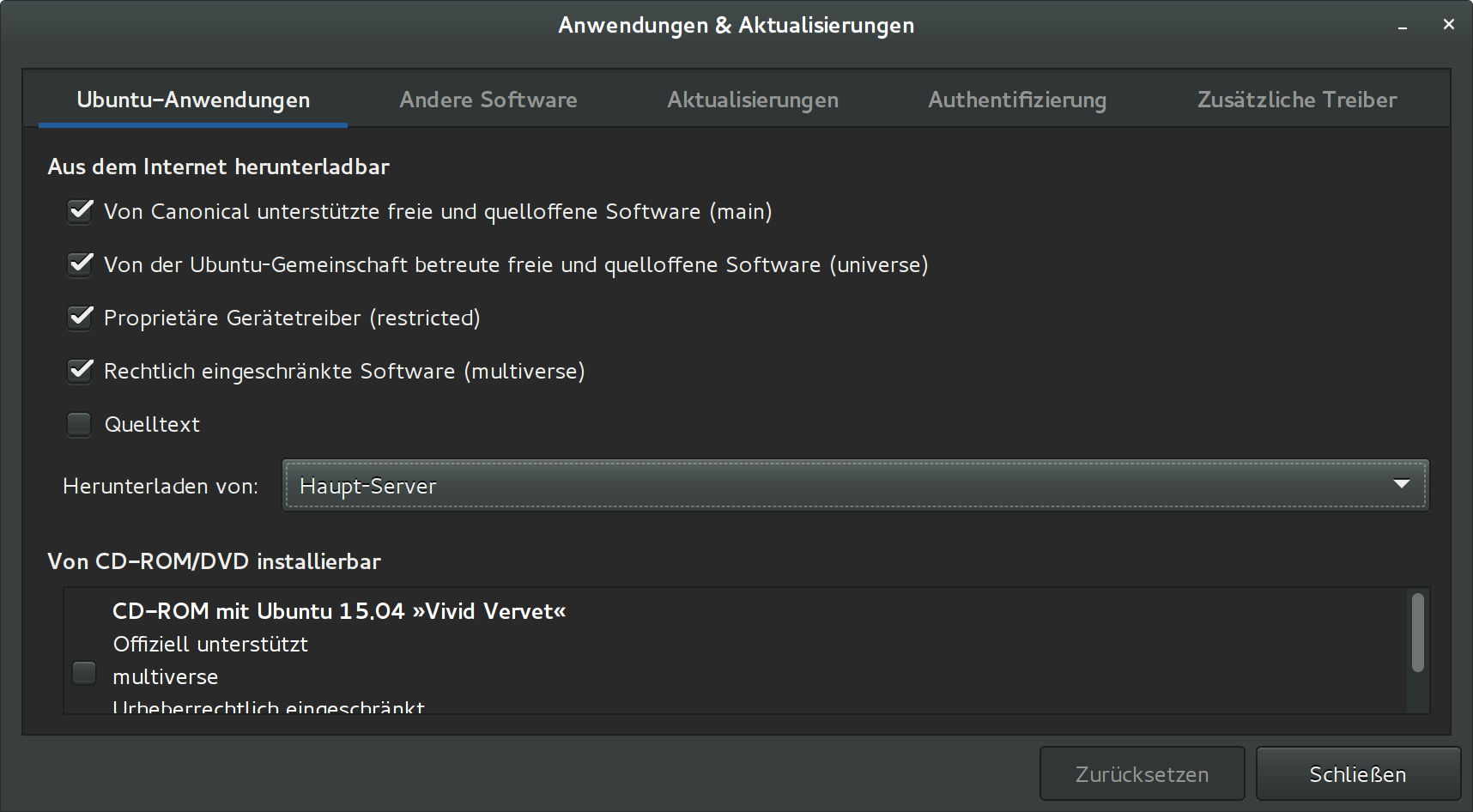 Since I changed away from "German Servers" to "Main Server" everything is fine...

First of all, make sure you have chosen proper sources at

Next, you can try what works for me:

In this dictionary, there can be a folder named

and it contains some config files you don't need.

I edited those config file by adding # in front of each line, and it make sense.

Not the answer you're looking for? Browse other questions tagged apt package-management updates ppa repository or ask your own question.

167
apt-get stuck at 0 [Connecting to us.archive.ubuntu.com]
1
Apt-get upgraded package from 32bit to unsupported 64bit - why and how to revert?

2
Can't install software from Software Center
1
Not all updates can be installed (missing packages)
1
Updage Manager considers generic packages as untrusted packages
4
Apt-get failed to fetch from Ubuntu server with error code 404
2
Why does apt-get give me an “Unable to connect” error?
3
Issues opening everything
0
Why is medibuntu.org still offered as a package source if it has been shutdown since 2010?
4
'sudo apt-get update' get a warning