I have had a bunch of hardware failures this week and I am down to a hybrid image laptop harddrive with mint 12 installed on it to boot as /media/cdrom but I can't add to the OS, and I have to reinitialize everything each boot. I'd like to get wine/playonlinux up as well as some drivers for a soundblaster xtigy and live externals, midi, and usb devices such as m-audio and akai devices for FLStudio

I have downloaded unetbootin and Ubuntu 14.04, my hope is to install a new installation onto the harddrive with mint 12 on it, as I can't do a full install from the drive, so I figure if I make a usb flash of Ubuntu I can do an install of Ubuntu from the flash drive.

I managed to install Ubuntu 14.04 desktop amd 64 with unetbootin - I partitioned a 4GB staples relay UFD (universal flash drive) with a fat32 partition it shows up as an EFI system parition after the .iso was installed by unet boot in -- I did flag the drive originally as a boot flag drive when I originally formatted it but after install the boot flag is no longer there (is this because it is an EFI partition?) It shows up fine, but after booting, and I changed my boot configuration to boot USB first then Harddrive. I removed my mint drive so only the USB was in after the first failure that booted into mint, and with just the USB drive, nothing detects during boot.

I am pretty darn certain the problem is boot related, in that the USB isn't being recognized as a boot device.

Is this because EFI isn't supported on Ubuntu usb drives, only ubuntu cd drives?

Do I need to install a usb version of ubuntu rather than desktop amd64?

Do I need to alter the .ISO to install a different boot?

Note I still have mint12 running off a separate drive but it is a pendrive install of a hybrid image, I think I might have grub running, could I just add the flashdrive to mint12s's grub so I can boot off it from grub rather than BIOS?

None the less I'd really like to get a persistent Linux going whether ubuntu or mint.

What exactly do I need to do to get Ubuntu running from the 4gb flash drive and recognized by the Dell Latitude d630?

As the D630 is an older model I don't believe UEFI has anything to do with it. Double check system requirements here I would avoid unetbootin as in my experience success is rare. I've had excellent results using dd to duplicate the iso to a USB flash drive. The process to do so can be found in here. Basically you just connect the flash drive you wish to install the image to and insure it's not mounted then issue the commands which you will need to edit as explained below. DO NOT copy and paste. Read the entirety of the answer and insure you have the device name correct before proceeding.

Where YourUbuntuImageName.iso is changed to the name of your Ubuntu iso image and /dev/XdY is changed to the device name of the flash drive you want the image duplicated onto. dd uses a default block size of 512 bytes which you don't have to change. If you want a progress report during the "burn" you can install dc3dd with sudo apt-get install dc3dd and substitute dc3dd for dd in the command. The output of mount and sudo fdisk -l can be useful in determining the device name.

This will result in a USB bootable installer for Ubuntu. Boot from it using BIOS (I believe the D630 will let you choose the device to boot from if You repeatedly tap F12, to get the boot options menu) having booted from the installer, install Ubuntu normally choosing as the target the flash drive you wish to install to.

Installing Ubuntu to a flash drive is no different from installing it to any other drive. Your BIOS determines which device is booted from. You can create your own "persistence" with normal partitioning methods if you want home on a separate partition but installing Ubuntu normally to a flash drive will result in persistence of settings and installed apps (just as installing to a hard drive would) anyway so it's not truly necessary. Here's where you make the changes on a Dell D630 to allow USB Boot. F2 at Dell Logo should get you to the BIOS. 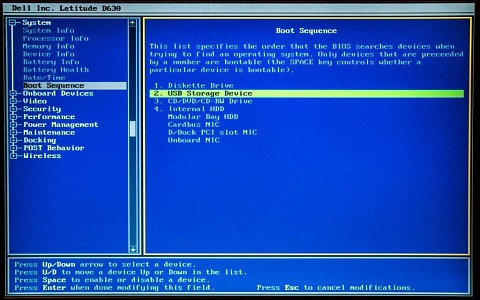 Not the answer you're looking for? Browse other questions tagged boot dual-boot grub2 partitioning usb or ask your own question.

387
How to create a bootable Ubuntu USB flash drive from terminal?

1
Ubuntu won't boot from USB 12.04
0
How do I boot into a uefi usb drive?
0
USB Boot Drive is not recognized from Windows computers
0
Boot from USB, but run on auxiliary hard drive
0
Unable to boot ubuntu 14.4 from usb on dell inspirton 15 3537
0
Can I turn an EFI-based USB Ubuntu installation into a plain bootable drive?
1
specify /boot folder during installation, since / drive is not accessible by BIOS