I've tried the following posts, as well as skimming through the VirtualBox manual:

On the host computer, I am running a Tomcat server at port 8080.

The problem I'm having is that using 10.0.2.2 in my guest system hosts files as indicated in other threads does not work. I've tried both the bridged and default NAT network configurations. I also disabled the firewall in the Windows guest just in case.

The network tab on each of my Virtual Host boxes looks like this: 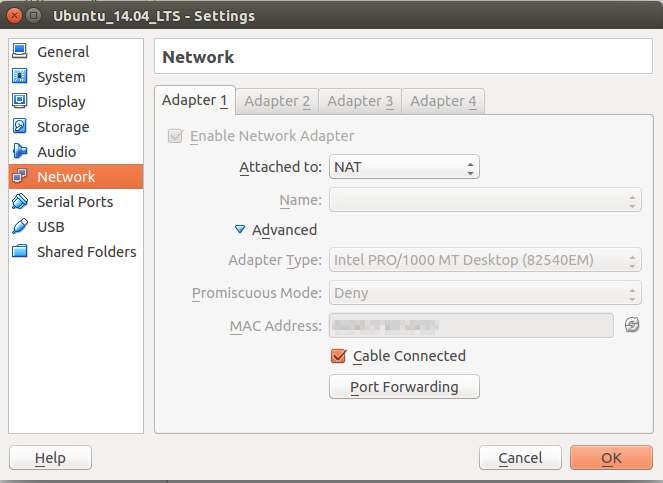 When I browse to http://myhostimage.site.org:8080 from a browser on either host image, the connection times out. I'm expecting to see the Tomcat server.

Next I tried switching to bridged networking, which didn't work. Then I tried changing 10.0.2.2 in the guest hosts files to the IP address of my host (192.168.1.41), which I got from running ifconfig. This hasn't worked either.

In the bridged/192.168.1.41 configuration, I ran nmap on the guest against the address of the host tomcat server and got the following.

What should I try next?

The nmap results were the biggest hint that the problem was not the network configuration with VirtualBox. The issue was with Tomcat.

I opened the conf/server.xml file in my Tomcat home directory. Then I changed the line

Suddenly, I could reach my host Tomcat from the guest VirtualBoxes. I even changed my VirtualBox settings back to NAT/10.0.2.2 and it still works.

I prefer the NAT/10.0.2.2 solution because I work on a laptop which I move from network to network, where it gets new IP addresses from DHCP. If I have to put the IP address in all of the hosts files, that's a pain.