Firefox not kept up to date

I am amazed this never happened for so long but I noticed that Firefox is no longer being upgraded on my Ubuntu 14.04 LTS so I am stuck on version 36.

Apparently somehow linked to the flash player being outdated. A warning came up and I discovered the problem with Firefox.

Anyone knows how to update manually and why this happens?

thanks for your helpful answers! However, surprisingly, 1 hr after having posted my question and NOT HAVING CHANGED anything on the system yet the update came up automatically!

Completely weird, isn't it? Apparently nothing happens for at least 2 - 3 months and, then, just when starting to investigate on it the update comes more or less instantly.

Does this appear logic or normal to you? Or could that be a hint to malware or something comparable controlling my computer? Something known about such threats?

Thanks again to all of you!

The latest version for Firefox in the Standard Ubuntu Repositories is 39.0+build5-0ubuntu0.14.04.1

Check, that you have enabled the trusty-security category. The screenshot is for Vivid, but that makes no difference. 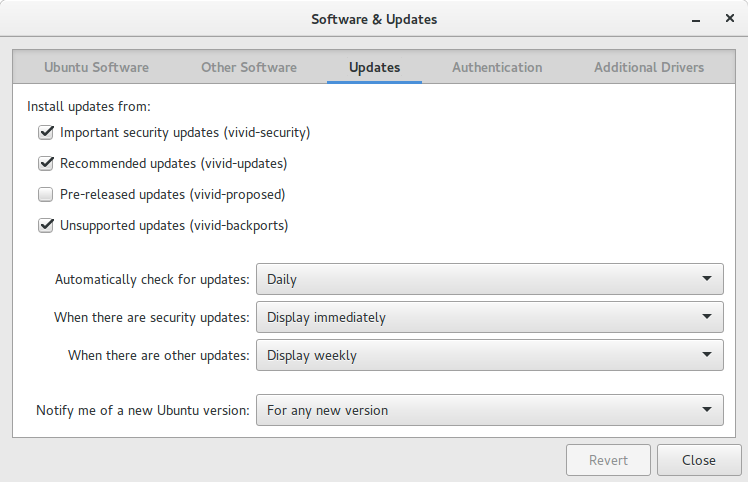 If there is no upgrade for your Firefox, check the hold status for firefox.

remove the unhold attribute with

You will see this message

You probably have a hold on the package. You can release it with

Sorry to post as an answer instead of comment, but for some I only have enough rep for answers (seems backwards?)

download the .deb file directly from here. just choose your architecture flavor and then you can install:

You can use another repository

As added information you can install new version manually:

Not the answer you're looking for? Browse other questions tagged updates firefox or ask your own question.