Just Installed a CLI system then ubuntu-desktop, does not boot automatically

I installed a CLI system with Ubuntu 11.10 Beta 2 Alternate CD. Then installed Ubuntu Desktop (--no-install-recommends). After a restart, it hangs at the below screen 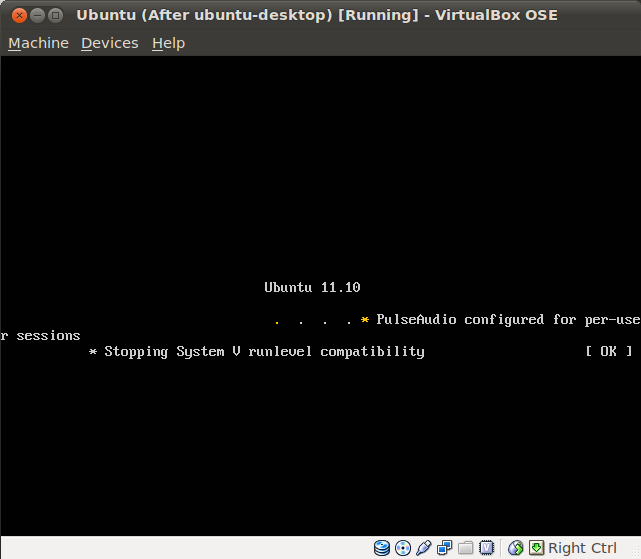 Btw: I notice a CLI system will NOT boot in by default (even in 11.04), I must go recovery mode and update grub then resume boot. This happens even when there are GRUB entries for the OSes already (though I am not sure if they are invalid or something). Another method is setting nomodeset

I used edited the boot entry to include text nomodeset. Then I got a full log with 1 fail 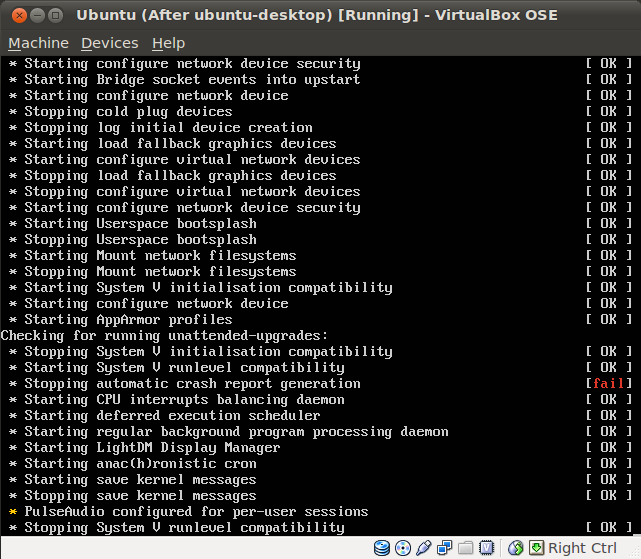 I just installed Ubuntu 11.10 Stable (CLI System) then installed ubuntu-desktop --no-install-recommends. startx to boot into Ubuntu Desktop OK. but reboot and got stuck on the above screen 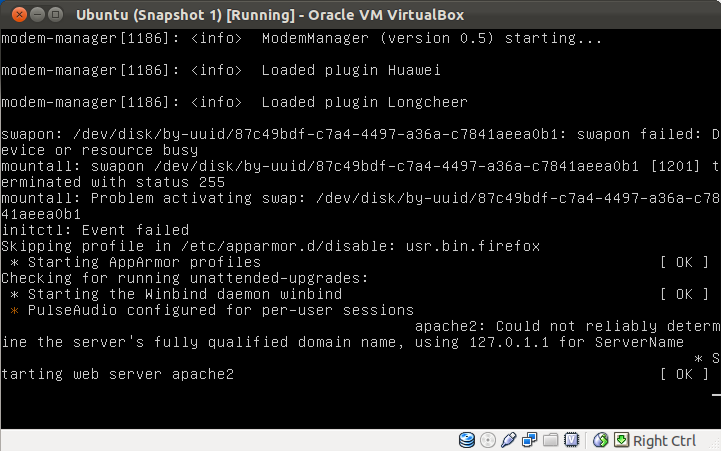 Tried booting into Ubuntu 11.10 but with text nomodeset in GRUB got similar as above 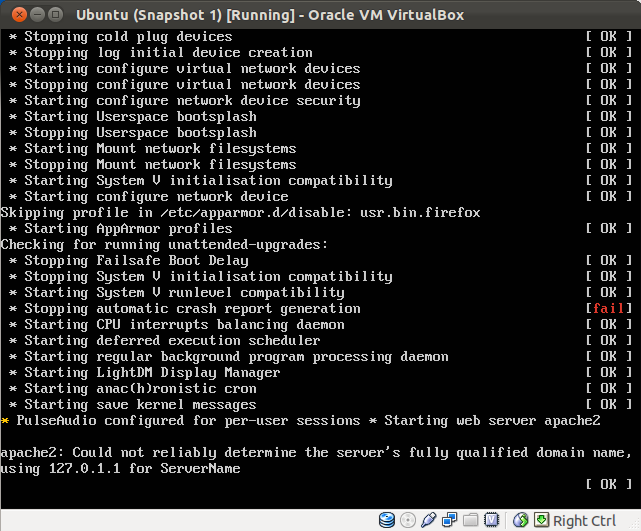 Hm. From those screenshots it looks like the display manager (LightDM) thinks it's starting but is not switching VT properly (or possibly not starting properly at all). It's not clear whether you've tried Ctrl+Alt+F7 to switch to the VT that lightdm will be starting on.

The logs in /var/log/lightdm/lightdm.log might be helpful in working out what's happening. Note: these may contain some identifying information, like your local username.

It's possible that either installing plymouth-theme-ubuntu-logo or adding vt.handoff=7 to your grub kernel boot commandline would fix this.

Try booting with the noacpi option, as well as both noacpi and nomodeset. There seems to be something about the ACPI initialization that gets in the way of (even text mode) video. On a related note, I had to start the 11.10 installer in noacpi mode on my Thinkpad T420s to get it to start up properly, but after install everything works perfectly.

It looks like an ACPI issue, but there are many steps to troubleshooting this properly. Take a look at the following wiki page and go through the steps.

This is a blog entry about what I had to do with my daughter's machine:

I had the same problem with Ubuntu 11.10 server after installing ubuntu-desktop with the --no-install-recommends flag.

I solved it with:

Not the answer you're looking for? Browse other questions tagged installation 11.10 grub2 or ask your own question.

72
What are the implications of --no-install-recommends (apt-get install)?
5
How to install gnome 3 on ubuntu server?
5
Blank screen with blinking cursor after install

2
Ubuntu 11.10 recently installed, purple screen, then text shown
7
Unable to boot into 11.10 in normal (get a black screen) OR recovery (get just a flashing cursor, no cli)
1
Black screen appears when booting new install of 11.10 on my desktop, cannot access Grub menu to fix
0
Ubuntu 11.10 then 12.04 then 60+ updates then boot only shows grub
1
Can't boot ubuntu, not even in safe mode
0
Dual Boot - Grub2 not detecting Ubuntu Server (10.4, 64 bit) after installing Ubuntu Desktop (12.04)
1
How to revert back to GUI as the default interface from CLI in Ubuntu desktop?
0
Ubuntu does not appear in Grub Menu. Boot Repair Failed