“Shockwave Flash is known to be vulnerable” warning

Today, I turned off my computer without any problems and went out. When I came back and tried to surf the net, I saw that my firefox started giving me this problem:

"Shockwave Flash is known to be vulnerable"

I did a research about it and uninstalled and installed back the adobe flash player plugin but it didn't work. Also my flash player is up to date. (Version: 11.02.202.481). And I use Lubuntu by the way.

Thank you for your support!

Mozilla, which develops Firefox, imposed the block because recently unearthed bugs in Flash were being actively used by cyber-thieves.

The bugs were detailed in a cache of documents stolen from security firm Hacking Team that was hit by attackers last week.

There is now no way to make it always active without some prompting, but you should be able to allow Flash for individual content by pressing the Activate Adobe Flash: 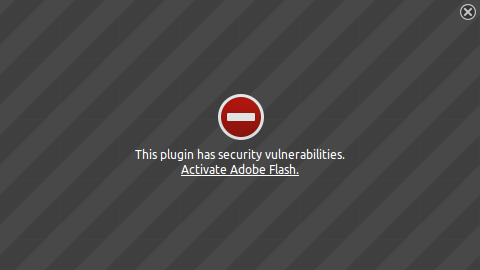 Or you can enable it for the site, and even choose to remember that you want it active for that site:

The accepted way to get Flash in Ubuntu and Linux, and a recent version, is with Google Chrome, as it's the only browser shipping a Flash version.

Adobe stopped supporting Flash for Linux (even in Firefox) around version 11. They no longer produce any 'new' Flash releases for Linux and the way Firefox handles plugins. Due to the really really old version number (18 is the latest Flash overall, and 11 is the last supported Firefox plugin version available for Linux), and other security concerns, Firefox automatically disables these 'old' versions. This applies to all Operating Systems, not just Ubuntu and *nix. (While @ParanoidPanda is correct they now enforce that for a few extra versions across all platforms, this isn't the primary reason for this warning in Ubuntu/Firefox).

However, even though Adobe pulled native support for Firefox's plugin API formats for Linux and such, Adobe and Google have an agreement. This agreement lets Google ship updated Flash that uses the Pepper API framework, and it is included in Google.

There are wrapper programs that can be installed into Firefox that leverage the use of the Pepper Flash in Chrome, provided you install Chrome. However, most users just switch to Chrome when this is the case.

I would suggest that you install Chrome and use that for browsing and using Flash sites (provided you keep it up to date).

Note however that there is no way to bypass this change in Firefox's policy. There is a page in the Security Team's knowledge base that details this issue a little more, or at least, provides a timeline for all the events related to this.

Trying to answer the obvious question:

Not the answer you're looking for? Browse other questions tagged lubuntu firefox flash or ask your own question.

0
How does Ubuntu control plugins
6
Installing Chrome on Ubuntu 14.04
2
Does Adobe, Firefox, or Canonical maintain flash plugin for Ubuntu?

1
Flash refusing to render on Ubuntu despite a successful install
5
How to install debug flash player 11.1 on 64-bit
1
Can't play any Flash videos
1
Only “Vulnerable” Flash Player version works
57
Adobe Flash Plugin is vulnerable/outdated in 14.04 but there is no update in Firefox
7
Flash player blocked?
0
Shockwave Flash 17.0 for Linux
1
Strange Shockwave Flash plugin appeared in Firefox when I don't use Flash