“mount” does not recognize my drive

I am trying to mount a HDD but I'm having no luck. The disk is a 3000GB Seagate SV35 that is exactly one year old. It is a secondary drive used only for data; the media center has an SSD for the OS partitions (Ubuntu 14.10).

The disk has been working very well in my media center until I powered that computer down normally. I powered up the computer a few hours later but it wouldn't start - I'm suspecting a fault in the PSU (also just 1 year old).

I want to access the disk so I have removed it from the media center and plugged it into a SATA dock that connects via USB to my desktop computer (Ubuntu 15.04). Oddly, Disks won't properly recognize the HDD! To the best of my memory, there is only a single 3TB Linux partition on that disk, so those 802GB are definitely wrong, and apparently it can't figure out the file system type or partitioning.

Given that the original host machine can't start at the moment, how can I mount this disk on another computer? 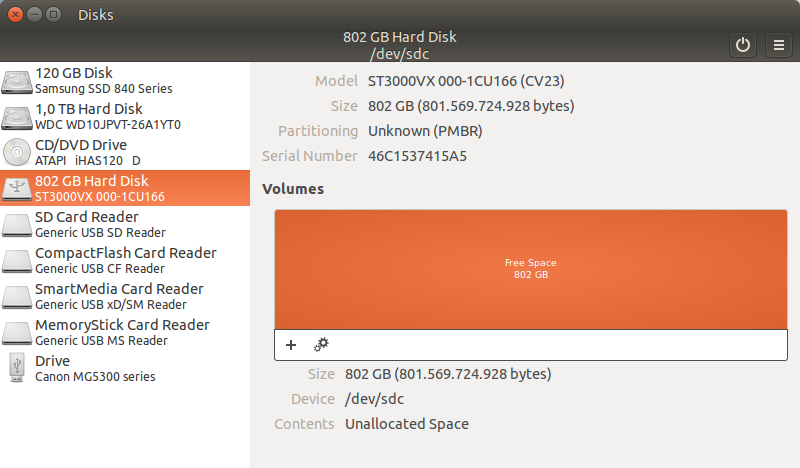 I've tried mounting the disk via the command line, using the -t switch to specify ext2,ext4,ntfs,ntfs-3g,auto but none of those work: mount answers that the format is invalid.

Your USB to sata dock doesn't support drives > 2 TiB. You will need to get another one or connect it via sata instead of usb.

Not the answer you're looking for? Browse other questions tagged mount hard-drive or ask your own question.

3
Unable to mount an LVM Hard-drive after upgrade
3
Deleted Windows Partitions on drive now what do I do?
0
Intel RAID5 array Shows < 50% space
1
unable to mount 3TB Hdd (System HPFS/NTFS/exFAT)
1
How to install grub after fatal error on failed RAID system?
0
Unable to mount primary partition in live CD
0
Not able to mount some partitions but can mount vfat