Sharing files between ubuntu 15.04 and android smartphone via wifi

I have ubuntu installed in my laptop and an android phone...is there any app like ShareIt , Superbeam , Xender (These softwares are used to transfer files via wifi between windows pc and android) available to use Ubuntu..So that we can transfer data between devices wirelessly

You can use Airdroid (https://www.airdroid.com/) and connect your phone with pc. You can do more than just transfering files with it. Android App

Xender can be used to transfer files between devices easily. 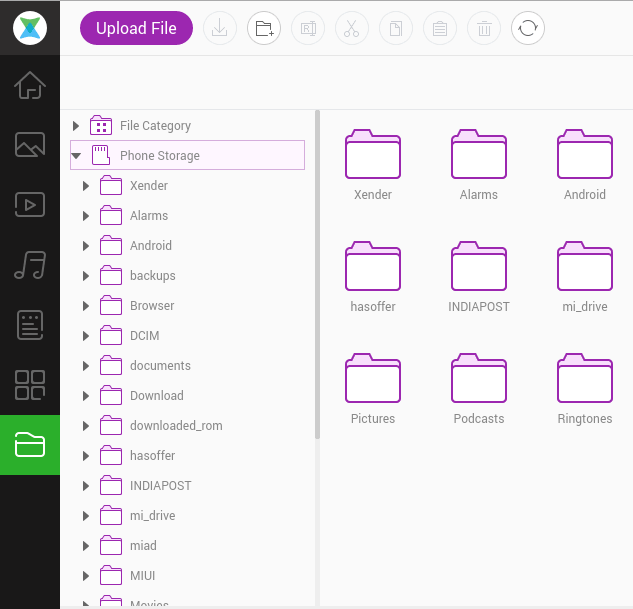 Use the "Connect to PC option." Then visit http://web.xender.com/ and scan the QR code.

In case your phone or the PC does not have internet access, you can manually connect by using your browser by visiting the IP address mentioned in the App.

You can use Kdeconnect it's great app no only for sharing but to you can view notifications and other stuff..

Depends on how much you want to transfer. I use Dropbox on Ubuntu, and Dropbox with DropSync on Android. I tired Kdeconnect, and it was not plug and play. I would have had to mess with ports, firewalls, etc. I CAN do that, but I prefer NOT to do that. I just set up a non public directory in either Ubuntu or Android and it gets reflected on both devices. I then push on the circling arrow emblem (push a poll request) using dropsync and it bypasses the sync cycle timer and causes instant sync. Drag and drop on ubuntu, and use a filemanager on Android to write them between source/destination directory on Android and the transfer directory in the Dropbox application. (Ubuntu has foreced all access to go through an abstraction that requires apps to create 'connectors', vs straight filesystem access. Basically, they are trying to force you to use Google products for cloud storage.

Just install Dukto. It's a good alternative to SHAREit. You need to install this tool on both devices Ubuntu and Android. Once installed, you can use the easily. Dukto makes it easy to transfer a large file in just minutes http://www.bettertechtips.com/ubuntu/transfer-files-ubuntu-android-wifi/

You can achieve a file transfer from your PC/Laptop(with a Linux distro) to Phone using following command:

Note, for this to work:

Not the answer you're looking for? Browse other questions tagged wireless files android sharing or ask your own question.

5
Share folders between PC and Android
3
how to connect android phone with ubuntu 12.04 laptop for accessing laptop's internet connection over wifi
3
How can I stream music files from Android Phone via wifi on ubuntu 12.10
0
Sharing internet between Mac mini (with Ubuntu) and Android
0
PC suite for Android mobile phone⠀
50
How to access my Android's files using Wi-Fi in Ubuntu?
13
Ubuntu 18.04 does not connect to Android smartphone
11
Answer android calls on ubuntu via bluetooth