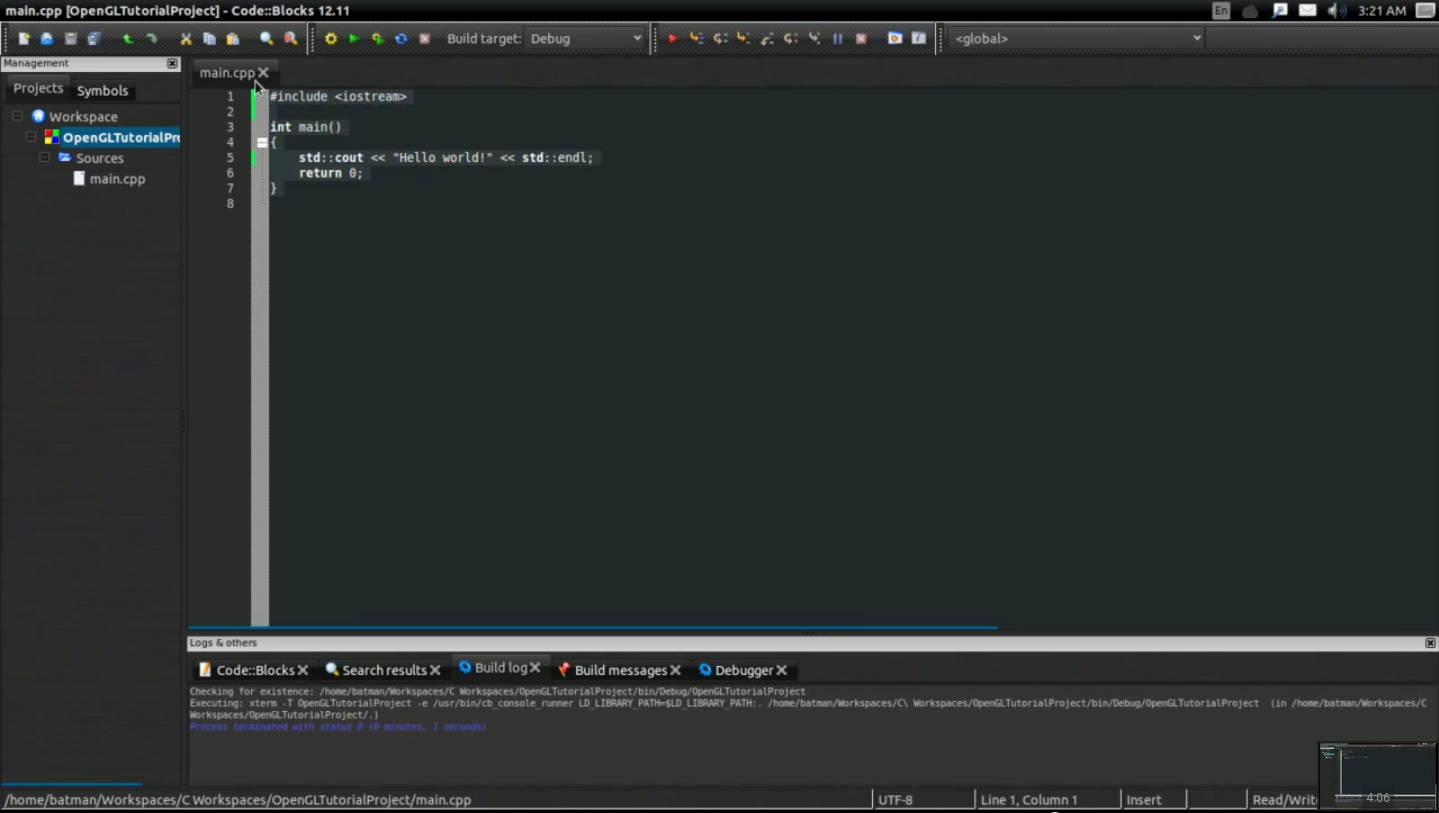 I installed codeblocks-contrib that gave me more controls such as keyboard shortcut settings. However I still could not figure out how to apply dark theme all areas including menu bar and left pane other than editor areas just like attached photo. Anybody know?

The following photo is my code::blocks that Dark theme only applied on editor area. 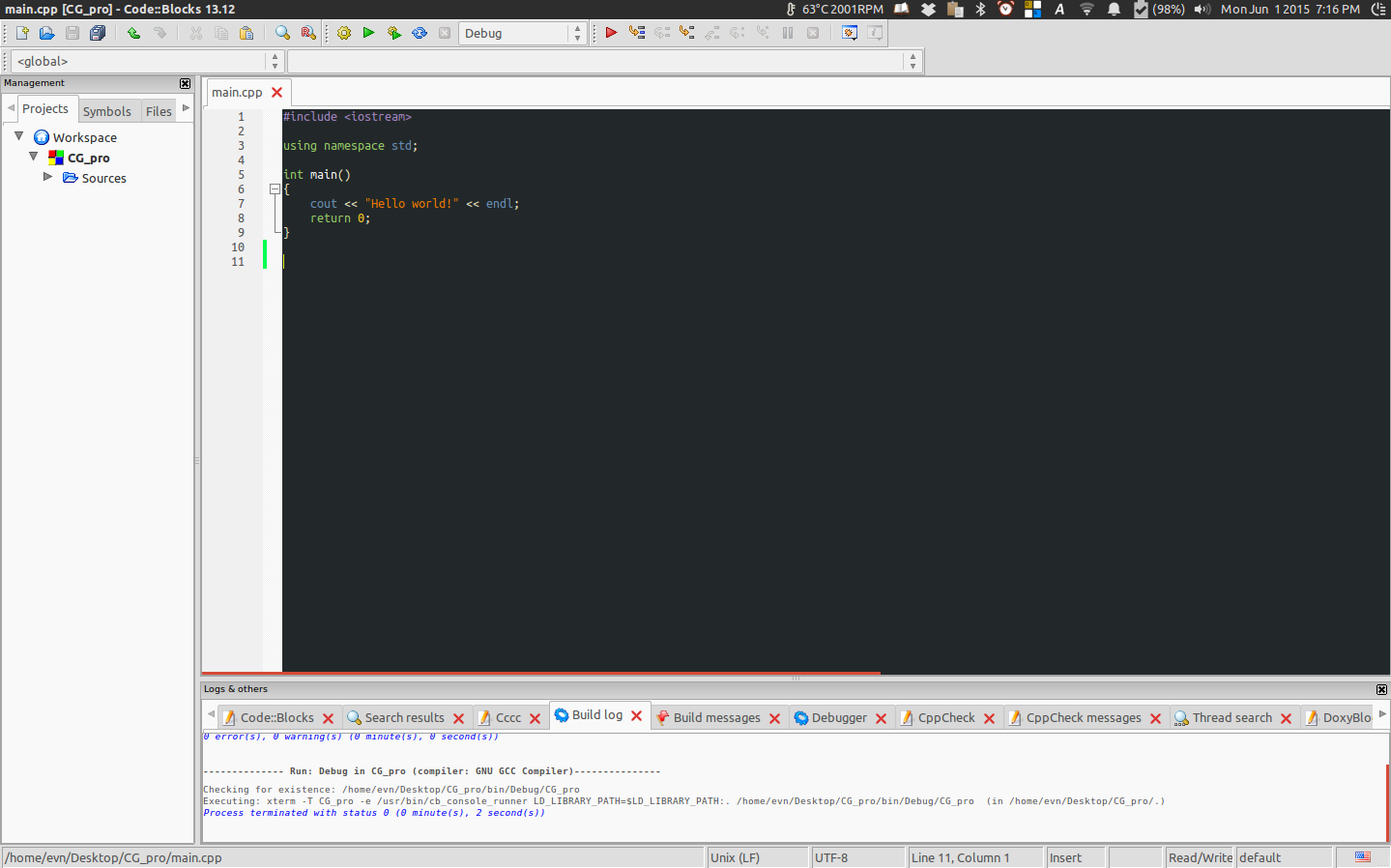 I found an answer at the following link: http://codeisland.org/2013/codeblocks-dark-theme/

For me, a Linux Mint user, the system-wide version didn't work.

I will now reproduce it here, in case the link disappears. All credits go to original finder of the workaround.

… is not existing. That is due to the fact that (for portability) Code::Blocks GUI is build using wxWidgets, which offers a “native look & feel on every platform”. This is equivalent to whatever the desktop environment thinks is right.

So, to get a dark theme in Code::Blocks, you need a dark-theme for the whole desktop environment? Yes and no.

Code::Blocks for Linux is explicitly created with the wxGTK port, meaning that the wxWidgets API is wrapped around the Gtk API. So, on Linux, Code::Blocks uses Gtk for it’s GUI.

Now, the wxGTK port is not completely up to date, so it doesn’t use Gtk-3, but the (older) Gtk-2. That is important, because the way themes work has slightly changed between those versions.

For applications which use Gtk-3, Gnome 3 offers a gtk-application-prefer-dark-theme-entry in it’s settings.ini-file, which tells all Gtk-3 apps to use the dark version of the currently set theme (if available, for example the Gnome 3 default-theme, “Adwaita”). This does however not affect Gtk-2 applications (like Code::Blocks).

Also, Gtk-3 applications can decide to not use the dark theme or to always use it (like Eye of Gnome):

So, I went over to Gnome-Look.org and searched for a good, dark Gtk-2 theme and found “Elegant Gnome” to be a good match. I then manually copied the theme itself [Elegant-GTK] over to ~/.themes/ and it’s icon-theme [Elegant-AwOken] to ~/.icons/.

I choose the later option. After some research, I stumbled across a Blog-post, where I found the following method:

This temporarily sets the environment-variable GTK2_RC_FILES to the theme-path, for the start of application (in our case codeblocks). Code::Blocks should now have a dark look.

Enable everything as default

Last but not least, I want Code::Blocks to always start with the dark Gtk-2 theme. If you set the theme system-wide, you don’t need to do this.

I put the command with the temporary theme in a shell-script and changed the /usr/share/applications/codeblocks.desktop-file to read:

And now, Code::Blocks is dark.

Now, I had a black editor and GUI theme, but a white window-titlebar. To get rid of that, I installed the “Maximus” extension for GnomeShell.

This article might not work a very long time! As posted on the start-page of wxWidgets:

So, it’s a matter of time until Code::Blocks will move on and use Gtk-3, which will then not work with the steps described here. I’ll update the article as soon as I run into problems with this. I no longer use code::blocks :(

Not the answer you're looking for? Browse other questions tagged themes code-blocks or ask your own question.

7
Code::Blocks: g++ not found
0
How to setup Code::Blocks for GLFW development?
0
Code::Blocks 17.12 not compiling
0
How to change the owneship of default.conf file in code::blocks editor in ubuntu?
1
Elementary Dark Theme for Geany (GTK3)
1
Set Lubuntu 20_04LXQT theme to dark