Put external monitor on the left 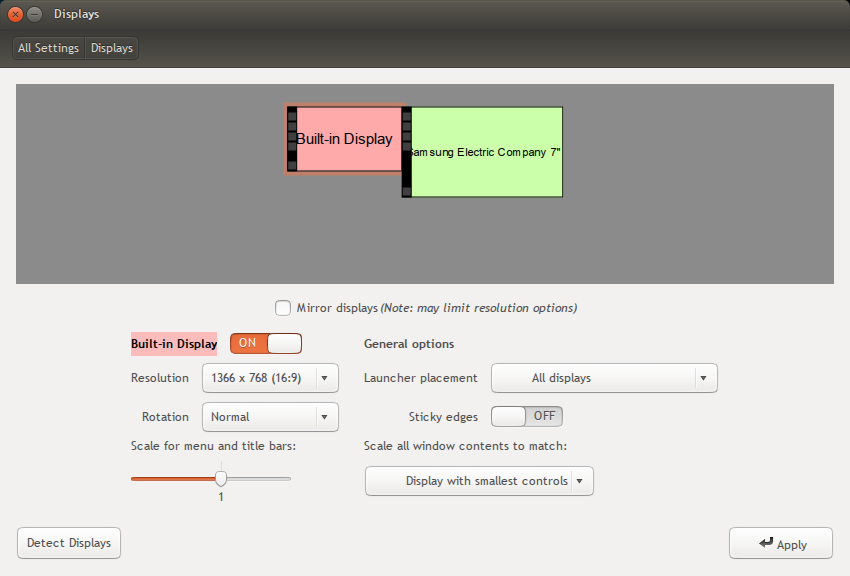 The screen icons in the system settings can actually be dragged, so you can place the green Samsung on the left. Alternatively, you can use this command:

I use this command (with different outputs of course) to position my screen, VGA to the left, internal monitor to the right, on graphical login.

Alternativelly, you can look into lxrandr program, which does exactly same job as Ubuntu's settings, but may be a little less confusing.

You can use arandr that is an easy-to-use tool.

drag the displays to fit them as you like e.g. 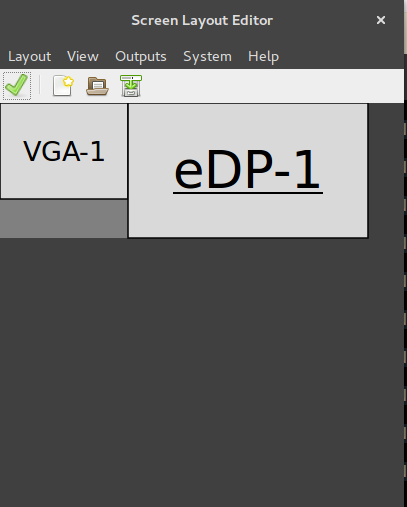 Unfortunately, there is no way to make the monitor settings understand you have your external screen on the left and you want the right screen to be the "main" screen, and the "home" location for your desktop icons.

That does not mean however that you are convicted to dragging and rearranging your icons every time your second screen is connected or disconnected.

With the script below (under a shortcut key), you can take a "snapshot" of the way your icons are arranged on your desktop (you only need to do this once).

With a second shortcut key, this snapshot will be "converted" to the new situation when a second screen is attached, and vice versa; your icons will always be on your main screen, arranged according to the snapshot.

The advantage is that the solution will work no matter what your screen setup is, and no matter how the screens are alligned. You can even change that, the script will calculate the setting and the positions of your icons.

How it works in practice

If you disconnect the second screen, your desktop will be messed up again. Simply press key combination (2), click on the desktop and press F5 again to restore the layout again.

I have this problemin virtuabox the solution , change the screen between monitors.

Other mode in Ubuntu is change xml monitors :

Not the answer you're looking for? Browse other questions tagged 14.04 unity multiple-monitors display or ask your own question.

0
Cannot switch to monitor from laptop
1
Lock the position of desktop icon 14.03