How do I set a new xdg-open setting?

I want to use xdg-open to open irc:// links, how can I make the required parameter?

I'll describe this with magnet: URI type and Transmission (i.e. case of bittorent), but the same method can be applied to any scheme or file type.

Also I checked this with Debian Jessie, and I don't actually have Ubuntu machine, but I believe it should work the same (at least for xdg-open, note that file managers may choose to use different logic).

Note 1: If you want to check out other MIME types, you can look at /etc/mime.types. It does not contain all types in the world; for example the URI handlers, but it could be used for "aggressive" form of handling the associations. For example:

would associate all known video formats to VLC.

Note 2: The .desktop files often contain list of MIME types that they claim to be able to handle using MimeType field. xdg-mime man page says that the .desktop file must claim the MIME type before the above mentioned command will work, but for me it seems to work even if the field is missing. (I mean, the association will be applied and the application will launch--if it really can handle the type is a different question). I'm not sure what is drawback (maybe in future the xdg-mime will be more restrictive).

Gnome uses the gnome-open program which uses gconf to store everything. For example on my machine with Ubuntu 10.10 running gnome-open irc://blah opens up xchat because xchat includes a gconf setting patch to add an irc:// handler. 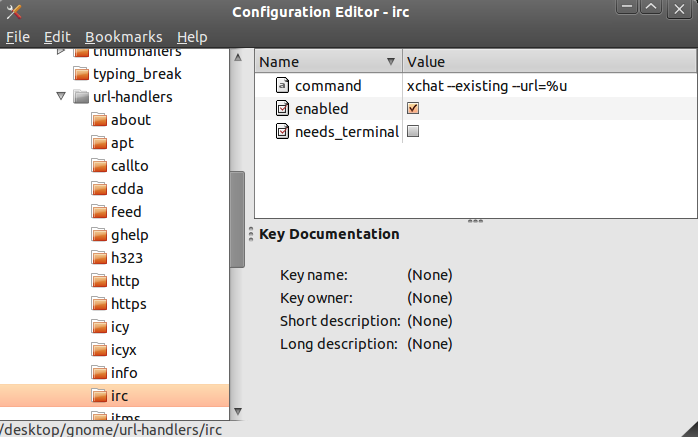 This shows how gnome does this, with a gconf settings in /desktop/gnome/url-handlers/. See xchat-2.8.8/src/common/dbus/apps_xchat_url_handler.schemas as an example.

KDE is using kde-open or kfmclient depending on what's available and what version of KDE you have.

XFCE uses a program called exo-open, this program doesn't have any way to configure it or add uri handlers. Looking through the source code shows that is uses desktop files to specify only three types of programs. TerminalEmulator, WebBrowser and EmailClient.

With XFCE4 (and probably also others) it is possible to configure xdg-open to define a custom protocol handler. In some you have to create/edit the following files:

An example adding a handler for the ed2k protocol is provided at stackexchange.com2.

I wanted to associate postman links with my manually installed Postman app (not the chrome extension) so that I could open postman docs from the browser like this: 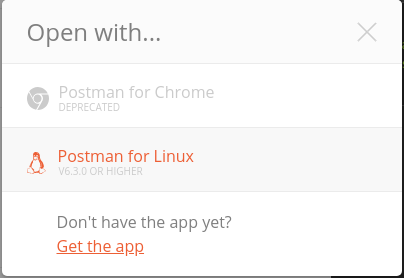 The link I wanted to associate looks like this:

To do the association I did the following steps:

Not the answer you're looking for? Browse other questions tagged xdg-open or ask your own question.

-2
Open Any file with specific Program?
47
How to open text, video, or image files via terminal?
28
How can I set which application is launched by 'xdg-open'?
4
How can I open irc:// links in Pidgin from Chromium?
2
how to get links from chrome to open in firefox?

4
How can I open irc:// links in Pidgin from Chromium?
4
emacs doesnot work with xdg-open
3
How to make xdg-open to use kde-open instead of gvfs-open?
1
Open file with any application using xdg-open
1
Any file download in Chrome keeps popping up Open xdg-open?
6
xdg-open can't open applications from links
3
Xdg-open doesn't work in Chromium
3
Protocol handler setting to automatically open protocol with xdg-open