I installed wkhtmltopdf, by sudo apt-get install wkhtmltopdf. Its version is 0.9.9.

http://wkhtmltopdf.org/downloads.html says its latest stable version is 0.12.2.1. So I download its deb for Ubuntu 14.04.

I want to use apt to install the downloaded deb for reasons stated in https://unix.stackexchange.com/a/159114/674 and related replies, so I move it to /var/cache/apt/archives, but still how can I install it using apt?

To install a manually downloaded .deb package and also automatically download and install the packages it depends on from your configured repositories:

See below for details.

Why apt-get Won't Do This

apt-get checks your configured software sources (repositories) and automatically downloads and installs packages. Except in the case where a configured repository is inaccessible, this does not enable an apt-get install command to succeed that would not otherwise succeed. If the package isn't in one of your repositories, apt-get will not know to install it even if the .deb file happens to be in /var/cache/apt/archives.

Way 1: Install with dpkg and Resolve Dependencies with apt-get

Fortunately, it doesn't look like you need to install this package with apt-get. It appears your actual goal is

You can do this in two separate steps:

Way 2: Use gdebi to Both Install and Resolve Dependencies

While apt-get won't attempt to automatically install an arbitrary .deb file and its dependencies, there is a tool made for this purpose: gdebi

gdebi lets you install local deb packages resolving and installing its dependencies. apt does the same, but only for remote (http, ftp) located packages.

To use gdebi in a terminal, run gdebi package.deb as root, e.g.:

But if you're running Kubuntu (or otherwise using KDE) you might prefer gdebi-kde, the KDE frontend (provided by the gdebi-kde

The graphical frontends may also be called without arguments (e.g., gksudo gdebi-gtk), in which case you may click File > Open to browse for and select the .deb file from within the GUI. 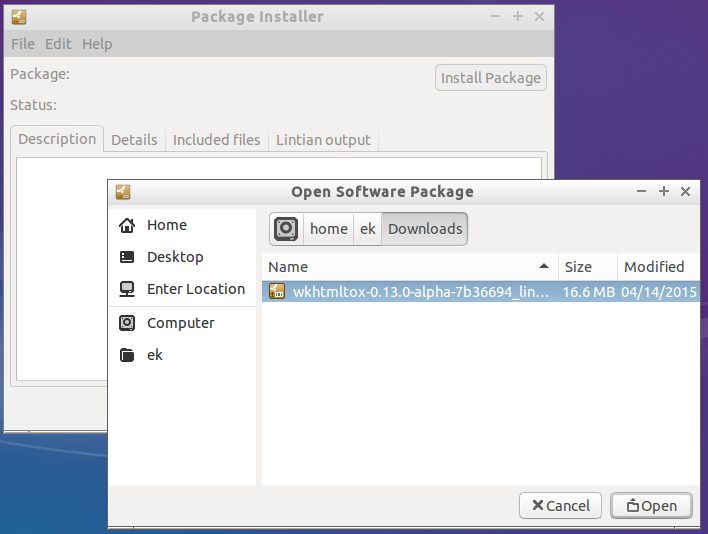 To install a locally stored .deb package use dpkg. Try:

apt takes care of the dependency problems which dpkg can not.

There is an interesting project dpkg-offline which is currently under development. To quote from the README of the project,

You can check out the development version of the tool here. I did not try it, so don't know how (un)stable it is.

Here is a tutorial from the dev branch in Launchpad on how to install and use dpkg-offline.

266
How can I install software or packages without Internet (offline)?
34
What is a “bad quality” package?
-3
Unable to locate package
2
Shall I install update for my self installed emacs?

2
How can I fix this dependency issue that broke Makerware with my last update?
3
Install Landscape dedicated server
12
Unable to locate package mysql-server