How do I set the TERM environment variable for the Gnome Terminal Emulator app?

The TERM environment variable defaults to xterm so the .bashrc file does not provide full color in the shell by default.

How to I change the TERM environment variable to xterm-color for the gnome terminal emulator app only?

Update: By full color I mean changes the command prompt to use color in addition to displaying output such as directory listing in color too.

There are two issues here.

One is how to detect if you're running inside gnome-terminal (or any other app using the same vte widget for the current terminal emulation). Assuming you're on a recent enough Ubuntu, the presence of the $VTE_VERSION variable tells you this. You could edit your .bashrc to contain something like

The other issue is that for some reason Ubuntu's default .bashrc tries to look for xterm-color which is not really used nowadays. Either the standard xterm (which supports colors anyways), or the more modern xterm-256color are the popular choices, the default slowly moving towards the latter. (gnome-terminal changed its default from xterm to xterm-256color in 3.16, which is present in Ubuntu 15.10 beyond)

If you would like to move forward and already enjoy plenty of colors in several applications, I recommend that you already switch to TERM=xterm-256color, which you could also do in the if-branch above.

Ubuntu's .bashrc is obsolete for using xterm-color. I much rather recommend modifying these bits in the script around whatever $TERM you already have (xterm) or would prefer to have (maybe xterm-256color), rather than the other way around, modifying $TERM to match .bashrc's requirement.

Edit the profile settings in gnome-termninal: 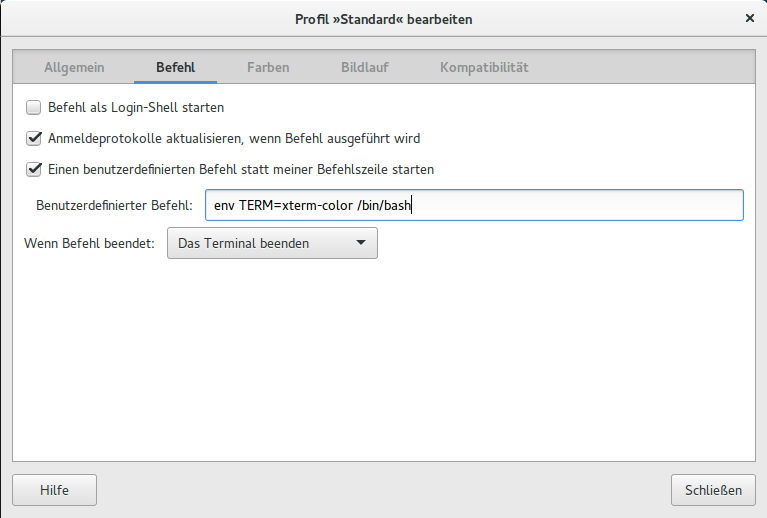 Replace /bin/bash with your shell command and use your parameter for TERM.

You can also edit the entries with dconf. Open a terminal and start dconf-editor:

Open the entry org/gnome/terminal/legacy/profiles: and select your profile. Change the value for custom-command.