Why does "lxsession&" via "ssh -X" make Ubuntu look different even after disconnecting?

I was working with my Raspberry Pi, and I ended up messing up my Ubuntu machine. I ssh -X'd into the Pi from my Ubuntu 14.04 desktop, and was trying to get a graphical session to start on the pi so I could see it with X11 forwarding. I ran startx and that got an error, so looking around I saw this discussion on raspberrypi.org, and (not really knowing what I was doing) tried lxsession&.

This changed Ubuntu so it looked like some version of Windows, with a task bar at the bottom of the screen and a different look for all of my programs, most noticeably the tabs on my web browsers. This persisted after I closed the Pi session (except for the task bar: it is gone).

This is what I did in the terminal:

What causes this problem and how can it be fixed? Will a reboot on the Ubuntu machine get back the Ubuntu look, or will it make this permanent?

This is what my Firefox browser looks like now. Most noticeably, the tabs and scroll bars look different: 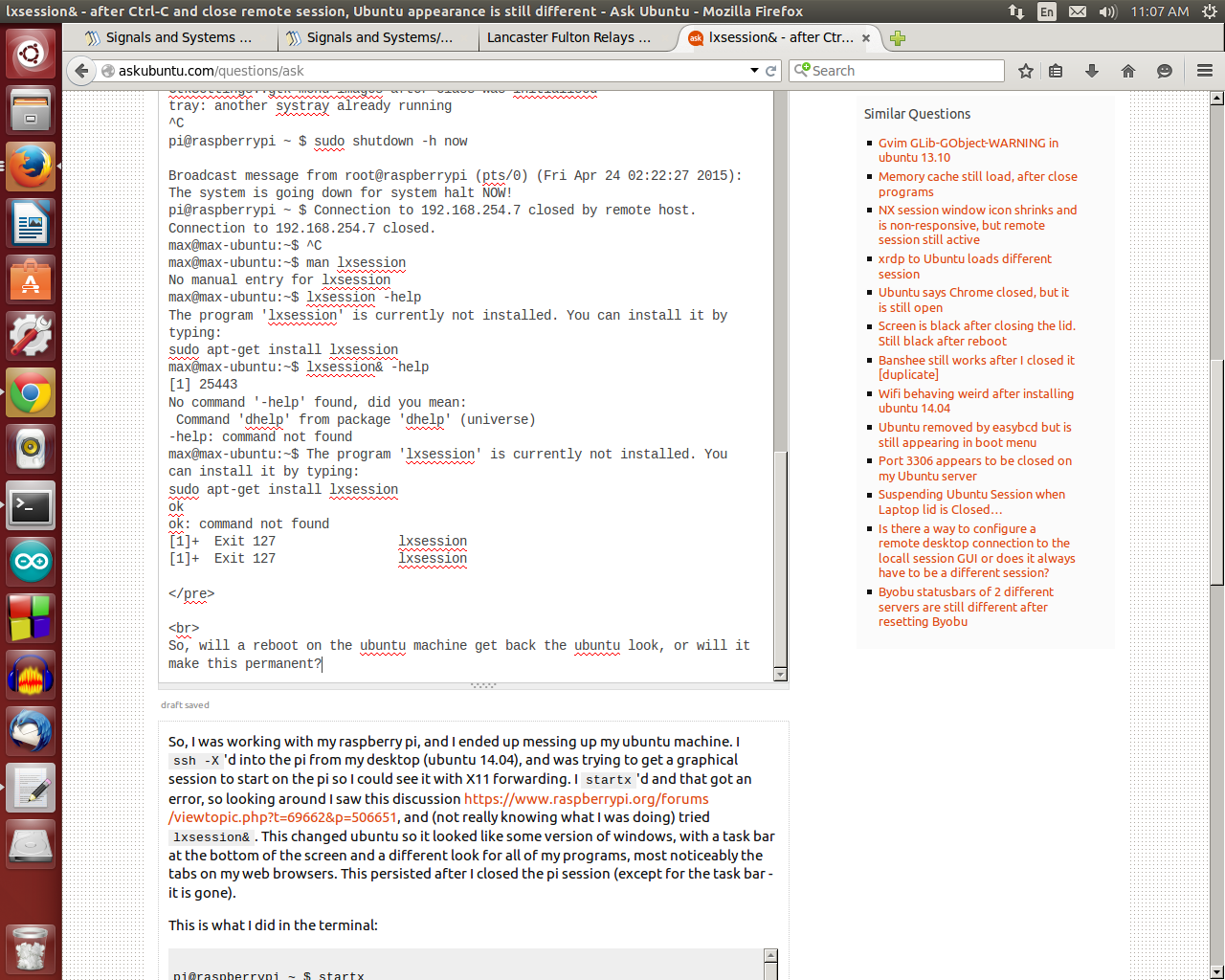 EDIT: I fixed it by rebooting, but I'd still be interested to know why this happens.

Rebooting is sufficient to fix this, but not necessary. You can fix your desktop by logging out and back in. You would do this on the affected system, that is, the system whose desktop was messed up, the Ubuntu system that was used as the SSH client, not the Rapsberry Pi that was the SSH server. Note that just locking and unlocking the screen will not work--but logging out is enough.

If you're using Unity, it's likely running compiz --replace on the affected machine would also work and avoid the need to log out, but I recommend logging out and back in.

Rebooting fixed the problem because it involved logging out and back in. It's okay, but not necessary.

When you use ssh -X and run a graphical program, the program:

LXSession is LXDE's session manager. Running lxsession on the SSH server from within the ssh -X session starts a graphical LXDE session on the server using the client's display. This produces the two major changes you noticed:

lxsession runs lxpanel. LXDE uses LXPanel as its panel. It somewhat resembles the Windows taskbar in that it has a single panel defaulting to the lower edge of the screen that, unless customized, has (a) a single nested menu openable from the left edge of the panel from which applications are placed in groups and (b) a window list inside the panel itself that facilitates switching between applications.

lxsession runs openbox. LXDE uses Openbox as its window manager (see also this article and this page). Window managers control how windows are displayed; they are what allow you to switch, move, and resize windows; and they provide borders and styling. Your Unity interface uses the Compiz window manager. Because it was connected to the display on the SSH client, the openbox instance running on the SSH sever attempted to manage the windows on the SSH client.

Those were the two major changes, but probably not the only ones. If you really wanted to know everything lsession ran, you could consult both its documentation and read the configuration files on the Raspberry Pi that it uses, or you could try replicating the problem and running pstree on the SSH server to see everything lxsession started. But this is unnecessary. Logging out and back in is sufficient to set everything right again. Rebooting, as you did, is also sufficient.

Because the major problem was that Compiz was no longer working properly, running compiz --replace on your Ubuntu system (the SSH client) would have fixed that. But logging out and back in is easy, simple, and doesn't require you to spend more time analyzing the problem.

Why You Didn't Find lxsession on the SSH Client

If this were a Lubuntu system or you had otherwise installed LXDE--or lxsession specifically--then you would have been able to view the manual page and run the program. This would not necessarily have been the same version of lxsession as you have on the Raspberry Pi. You can try SSHing to the Raspberry Pi and running man lxsession there. (Unless you are trying to reproduce the problem, I recommend against running lxsession on the Raspberry Pi.)

What You Meant To Do

You could run X11 on Ubuntu without a session manager or even a window manager, and you could run ssh -X and then lxsession on the Raspberry Pi. With nothing like a existing X session already running, your desktop would not be disrupted. But I doubt this is what you want. You probably want one of three things:

When you put & at the end of a command, it will run in the background, so when you closed the session, the process was still active.

This is why rebooting fixed it as all the processes got shut down. including the background ones you created like lxsession&.

Maybe next time try running it without the &.

Rebooting fixes the problem, giving me a normal screen again: 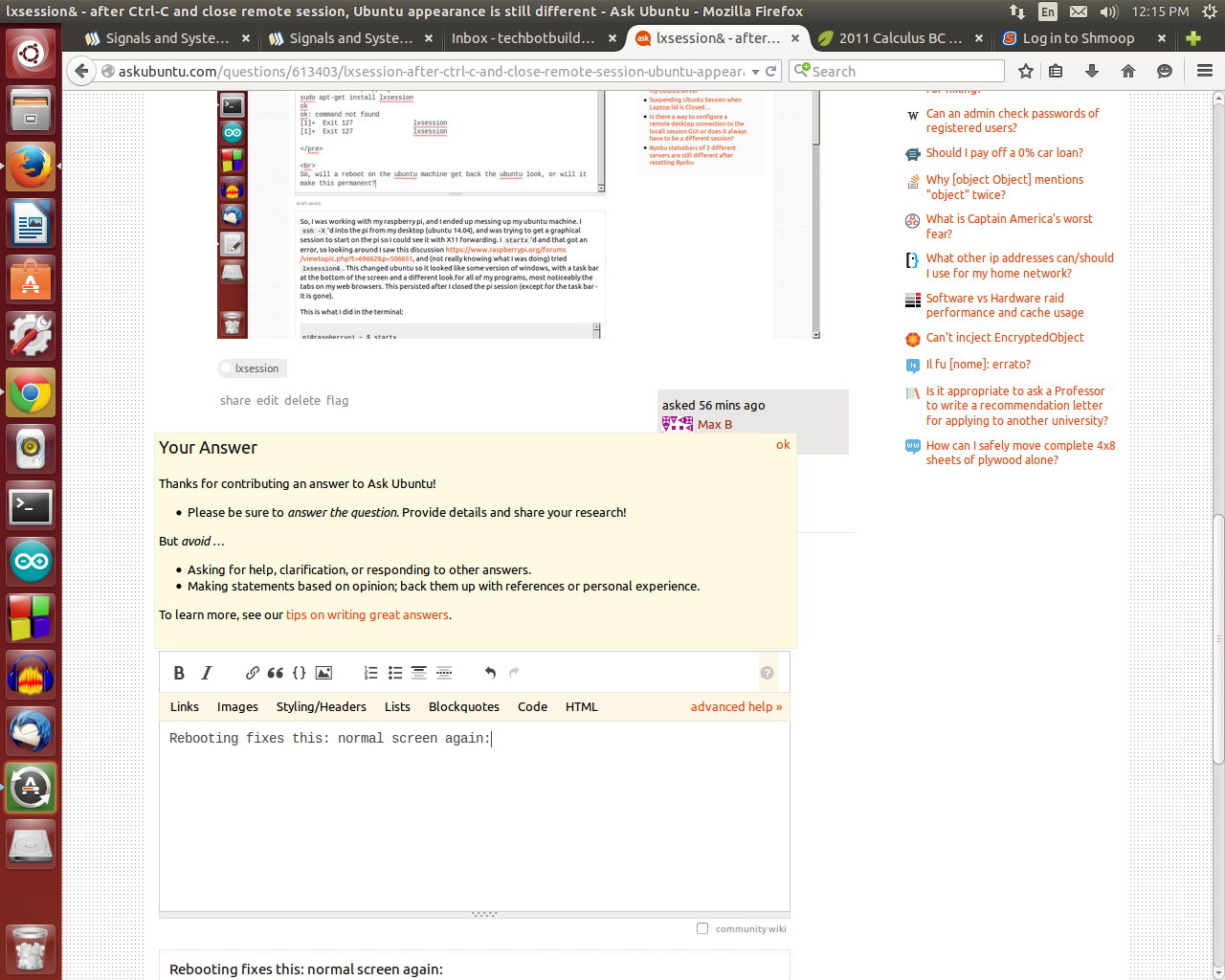 However, when I rebooted, I was shown a giant raspberry on my desktop momentarily, as would be seen when shutting down the Pi with a GUI started. (At this point, the raspberry pi was turned off and disconnected for quite some time.)

So, if anyone has this problem, rebooting your computer will fix it.

76
How do I set up xrdp session that reuses an existing session?
14
How can I start a different X session on tty8?
9
Is it possible to start an additional X server after the system boots in 12.04?
6
How to keep a remote X11 app running after disconnecting SSH?

4
Does disconnecting from an SSH session kill it?
2
Suspend after delay via SSH
3
Cannot login via SSH after installing LAMP via Tasksel
1
Why does key-based ssh fail even after setting up the authorized_keys file on the remote host?
1
Why does remote server over ssh prompt for password even if I locked user?
0
SSH “login” persists even after reboot
6
How to keep a remote X11 app running after disconnecting SSH?
0
Getting prompted for a password via SSH even after setting up authorized_keys
0
Unable to X11 tunnel via ssh to Ubuntu 22.04.1 server