I have a machine (hostname foo) with two wired network interfaces, eth0 and eth1. When I connect another host bar to one of them (eth0), I can see in either one's NetworkManager that it's using "Link-Local Only" mode: 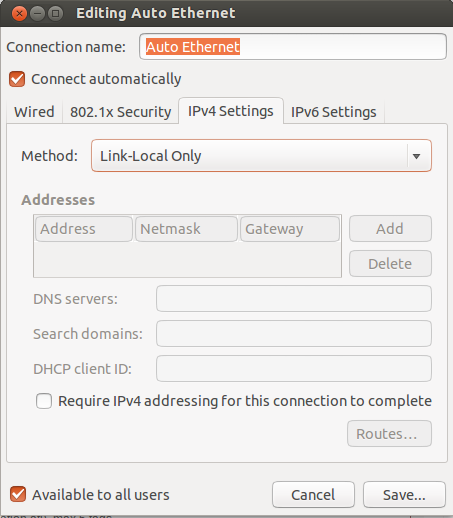 This works great—I can instantly communicate between the two hosts just with ping foo.local or ping bar.local.

However, as soon as I plug in a second host onto eth1, foo.local and bar.local become unreachable to each other, due to now having multiple overlapping 169.254.0.0/16 routes. How do I fix this permanently, such that I don't need to repeat some ip incantations on each host every time I connect a host, and also minimize the amount of static IP configuration I have to do (I'd like to solve this in the most ZeroConfNetworking-ish way possible)?

It a shot in the dark, but could you try this on the host foo:

Not the answer you're looking for? Browse other questions tagged networking or ask your own question.