How do I create highlights on a screenshot?

In Chipaca's answer to Managing files and sync scenarios there's a screenshot with certain highlights. The highlights are the following:

How do I create both of these highlights on a screenshot? Is there an automated process?

Here's a guide for The GIMP

The selection is now highlighted. 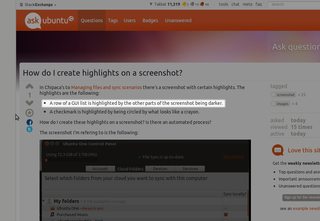 Note: in some versions of GIMP the highlighting may be removed as soon as we select another tool or save the image. In this case, we can proceed as follows to keep the area highlighted: 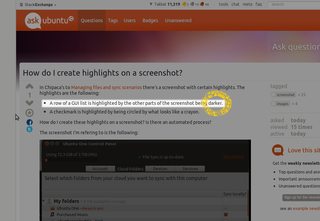 You can do this in editors such as Pinta, Shutter*, the GIMP, etc.

The process may vary, but one way to do it, would be to place a translucent square/rectangle in a second layer above the image, and then to cut out the part that you want to glow. 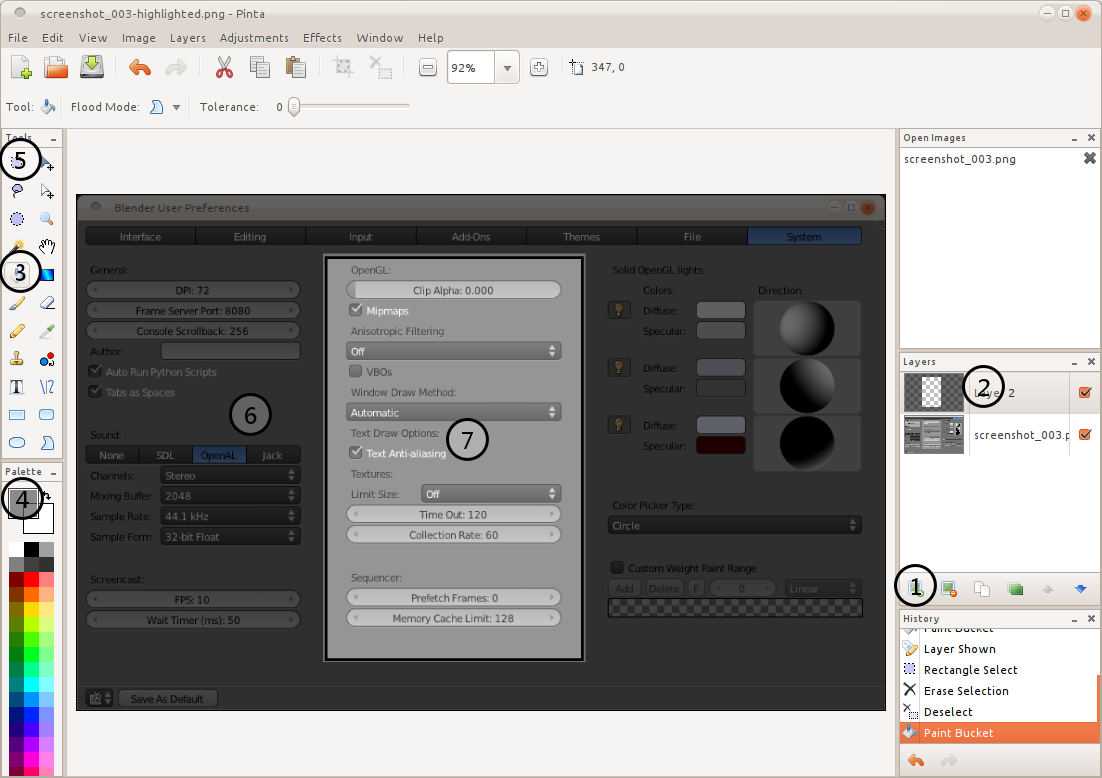 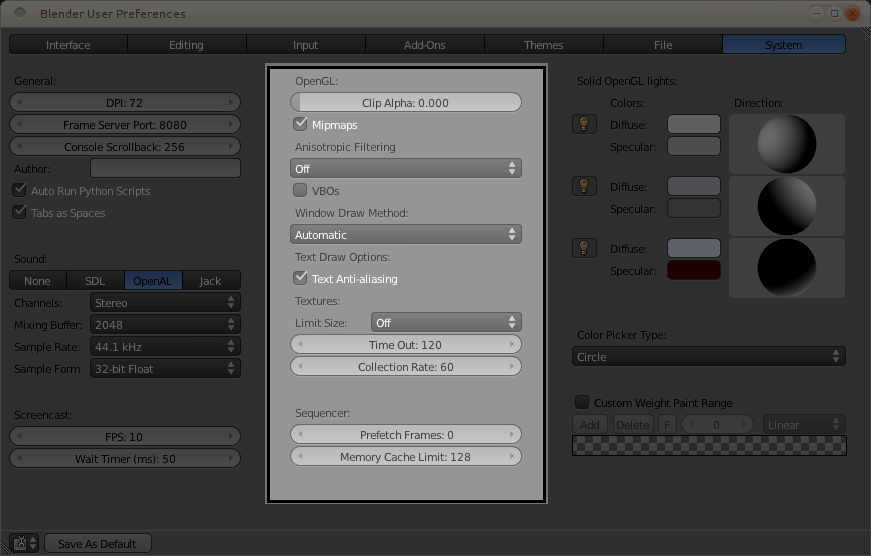 * Shutter is more for accomplishing the reverse effect.

NOTE: The options for gimp were available easily for me because I have customised it a lot. Use some gimp tutorial to learn how to use it.

I think it is actually easier to use shutter both for the screenshot and for the highlight. Shutter is an awesome GUI screenshot and image editing tool.

If you don't have shutter installed, you can quickly install it via the terminal:
sudo apt install shutter

Launch shutter using your favourite method. This is on Ubuntu 16.04. 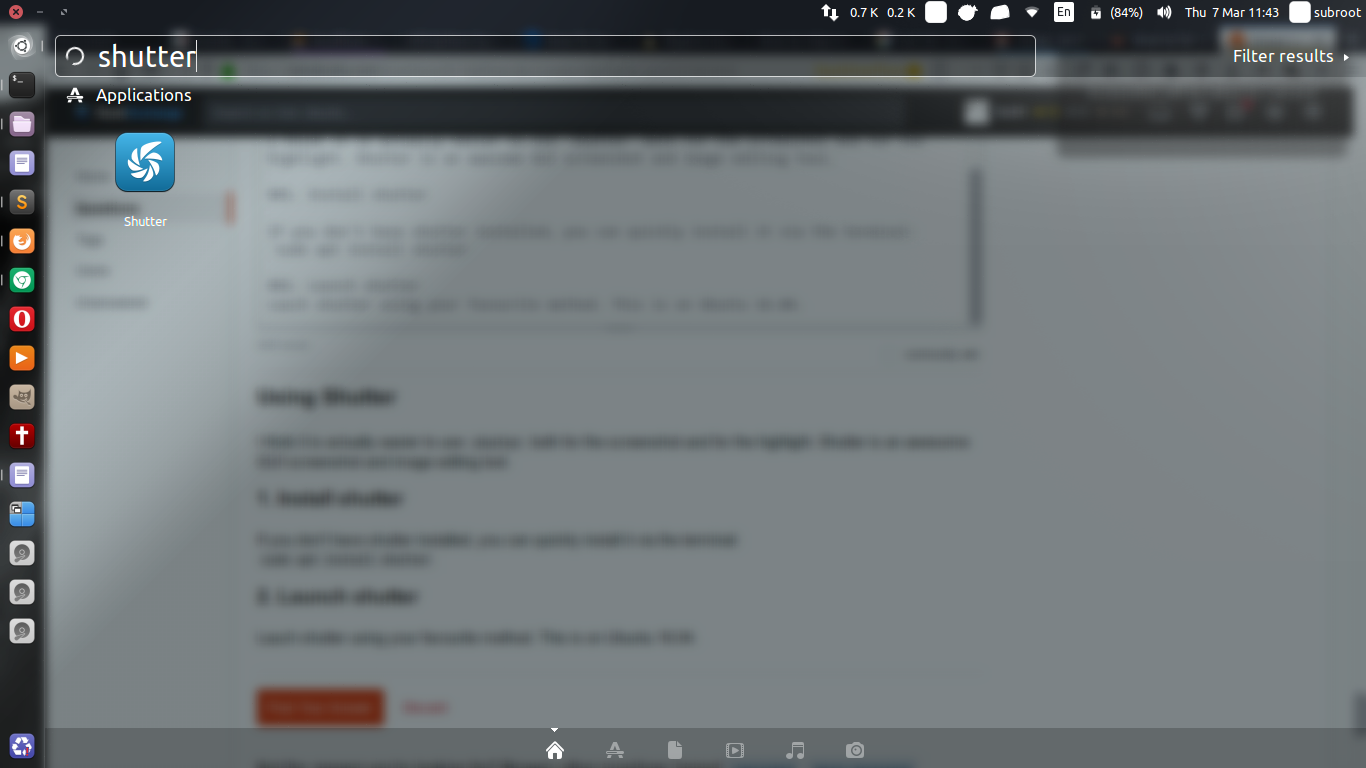 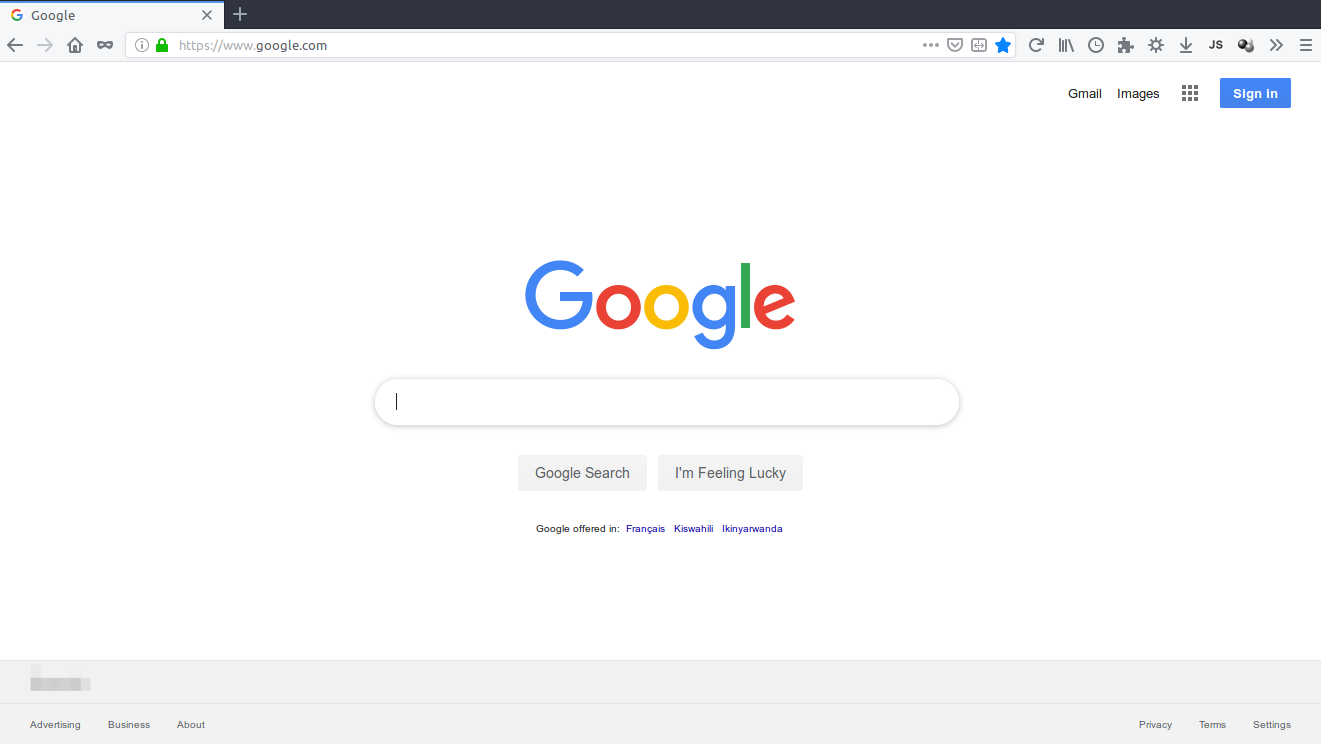 You will be greeted by a screen like this showing your last screenshot. Click on the Edit button at the top right corner. 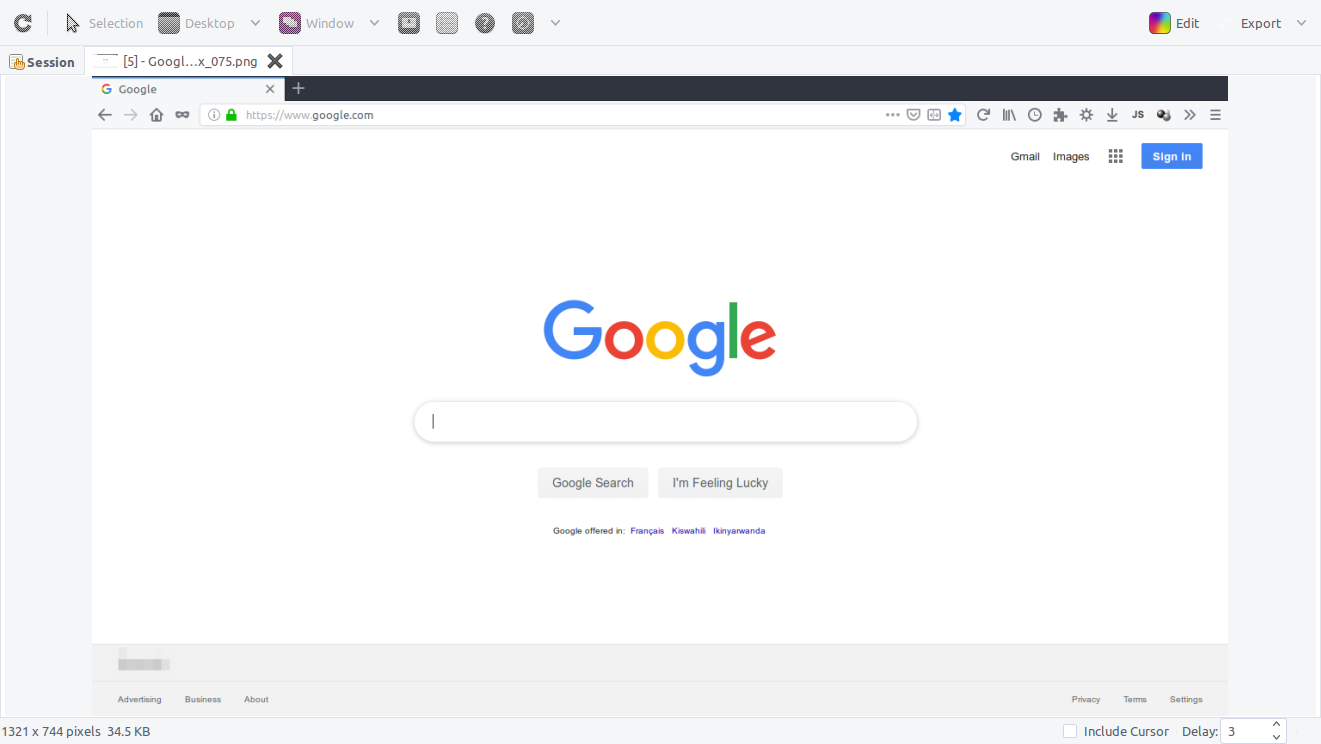 This will open such a window with the edit tools and buttons on the left hand side. 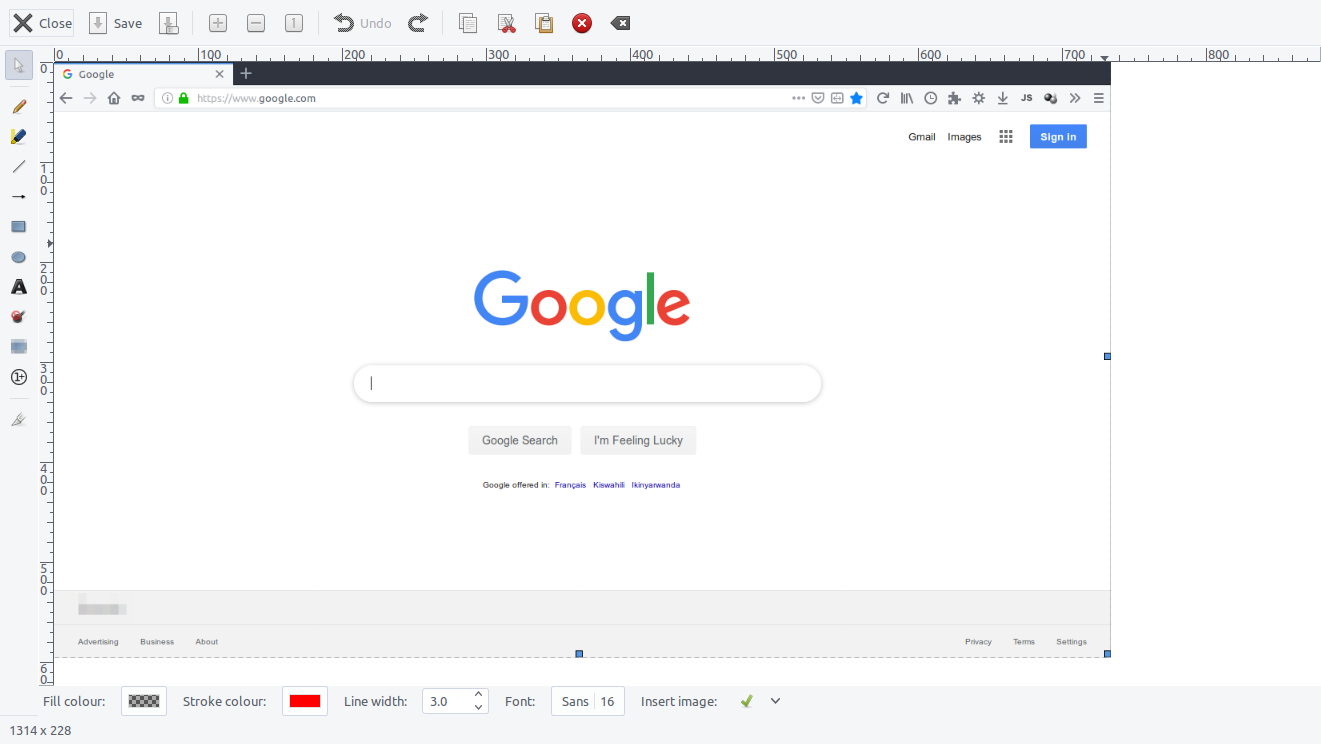 Among the tools you can use include:

Edit the screenshot as required then click the save button on the top left corner to save the changes.

The screenshot below shows the effect of some of these tools: 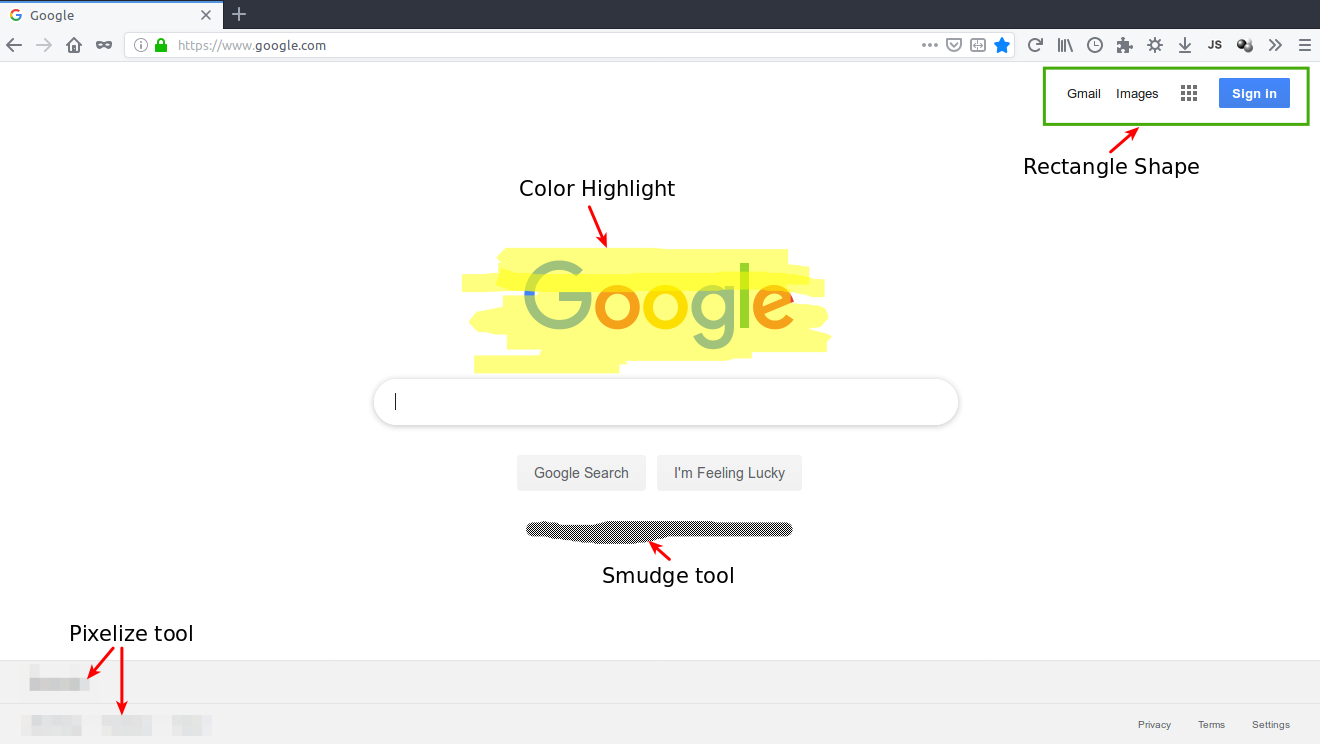 Whenever you have a workflow like the ones shown in the other answers for the GIMP, it's somewhat easy to automate them at least partially (with the restrictions that scripts have compared to plugins) by writing some Script-Fu (so, Scheme), or Python. If the script is written to respect undo/redo, this also makes experimenting with the values a little bit easier, because it's just a keypress away to remove all traces of the effect again.

Here's a script automates the highlighting part, because I might use that myself going forwards.

Scripts go into ~/.config/GIMP/2.10/scripts (or e.g. ~/.gimp-2.8/scripts, respectively other version numbers), then you only have to start the program, or use Filters > Script-Fu > Refresh Scripts if the file was added when it was already running.

Afterwards, select something and use Filters > Light and Shadow > Highlight Area... to create a new highlight (well, shadow really) layer: 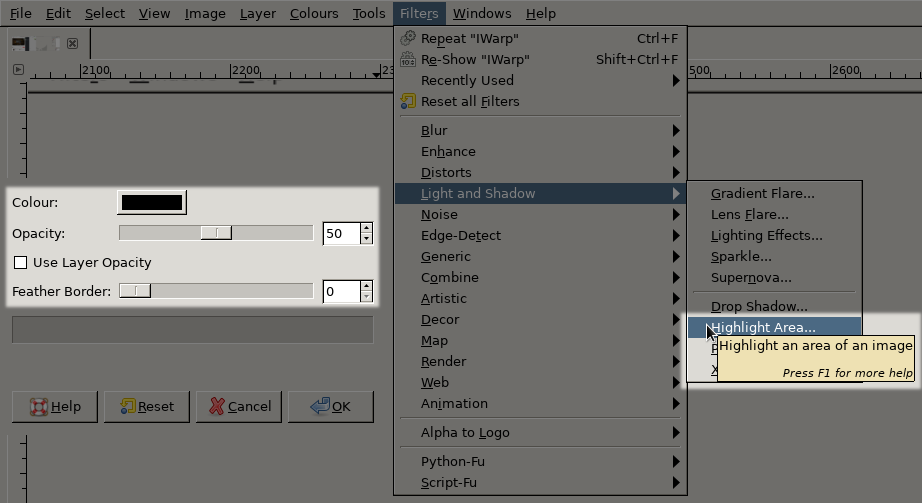 This is also how the highlights would look with 5px of feather applied.

Feathering is optional, after all you can achieve the same effect by using the feather option of the selection tool; using layer opacity can make fiddling with the colour a bit easier, but if you want to paint on top it's easier to go with alpha fill (alternatively another layer would have to be added).

Not the answer you're looking for? Browse other questions tagged screenshot image-processing annotation or ask your own question.

11
Simple image editor tool to draw a simple box/rectangle in an existing image
78
How to restore the default toolbox windows in GIMP?
2
Managing files and sync scenarios

6
How to uninstall the default screenshot app?
9
Create an .svg screenshot
0
zscreen - real alternative for automated screen capture
0
Installing gnome screenshot
3
Instant screenshot uploaders?
8
How can I highlight parts in a screenshot