I frequently encounter text files (such as subtitle files in my native language, Persian) with character encoding problems. These files are created on Windows, and saved with an unsuitable encoding (seems to be ANSI), which looks gibberish and unreadable, like this: 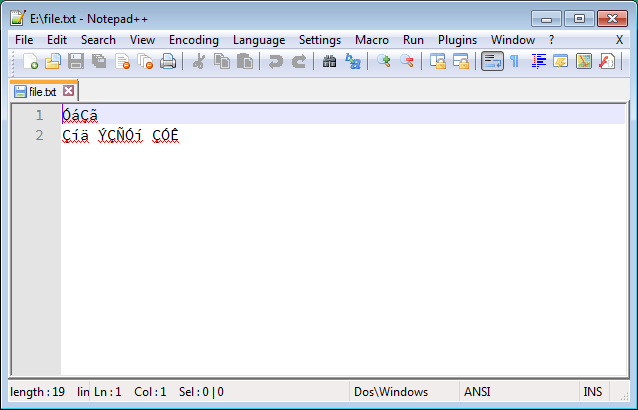 In Windows, one can fix this easily using Notepad++ to convert the encoding to UTF-8, like below: 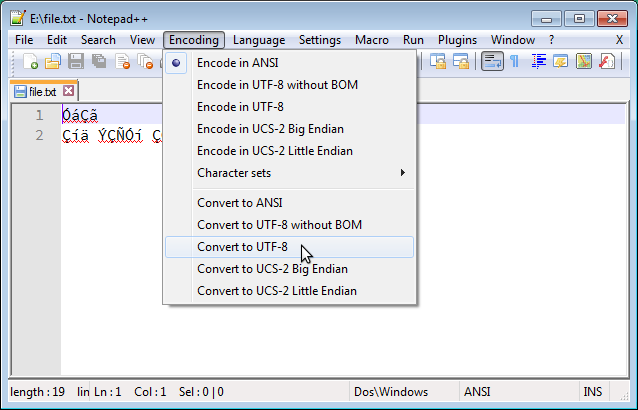 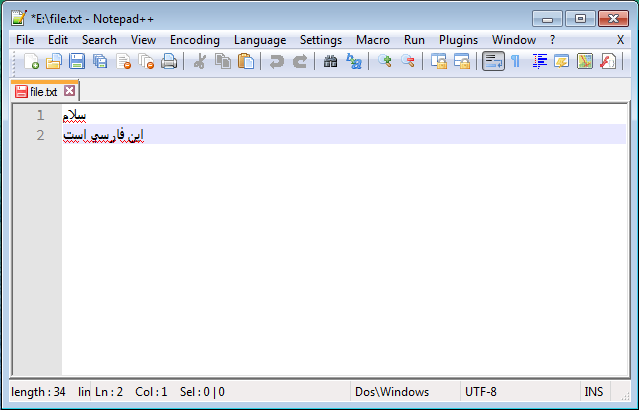 I've searched a lot for a similar solution on GNU/Linux, but unfortunately the suggested solutions (e.g this question) don't work. Most of all, I've seen people suggest iconv and recode but I have had no luck with these tools. I've tested many commands, including the followings, and all have failed:

None of these worked!

I'm using Ubuntu-14.04 and I'm looking for a simple solution (either GUI or CLI) that works just as Notepad++ does.

If someone needs a test-case to examine different solutions, the above example is accessible via this link.

These Windows files with Persian text are encoded in Windows-1256. So it can be deciphered by command similar to OP tried, but with different charsets. Namely:

This one assumes that the LANG environment variable is set to a UTF-8 locale. To convert to any encoding (UTF-8 or otherwise), regardless of the current locale, one can say:

Original poster is also confused with semantic of text recoding tools (recode, iconv). For source encoding (source.. or -f) one must specify encoding with which the file is saved (by the program that created it). Not some (naïve) guesses based on mojibake characters in programs that try (but fail) to read it. Trying either ISO-8859-15 or WINDOWS-1252 for a Persian text was obviously an impasse: these encodings merely do not contain any Persian letter.

The working solution I found is using the Microsoft Visual Studio Code text editor which is Freeware and available for Linux.

Open the file you want to convert its encoding in VS-Code. At the bottom of the window, there are a few buttons. One of them is related to the file encoding, as shown below: 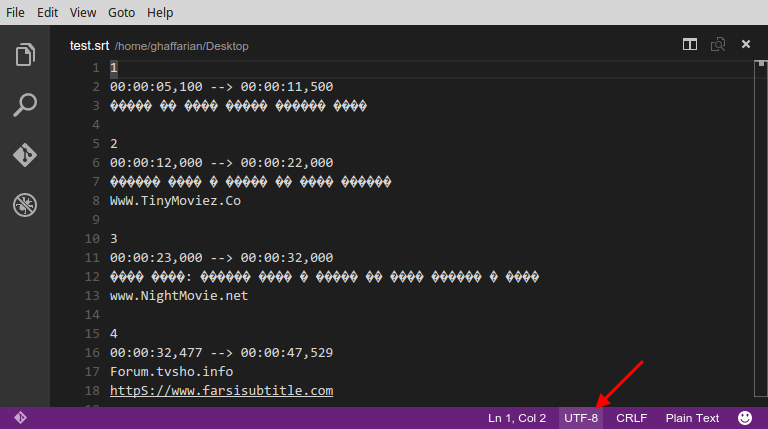 Clicking this button pops up an overhead menu which includes two items. From this menu select the "Reopen with Encoding" option, just like below: 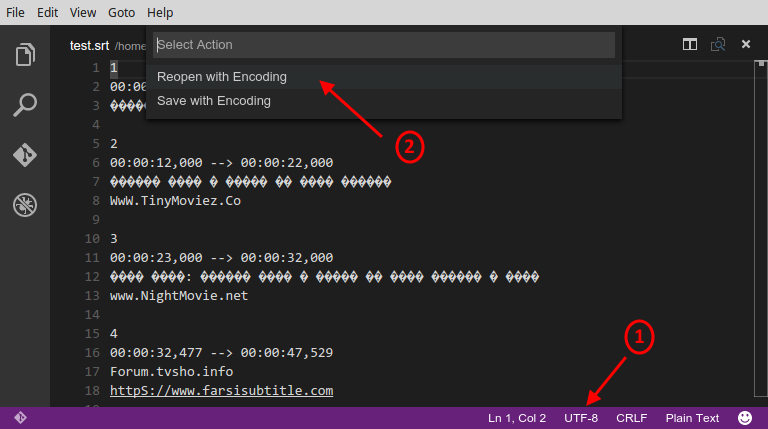 This will open another menu which includes a list of different encoding, as shown below. Now select "Arabic (Windows 1256)": 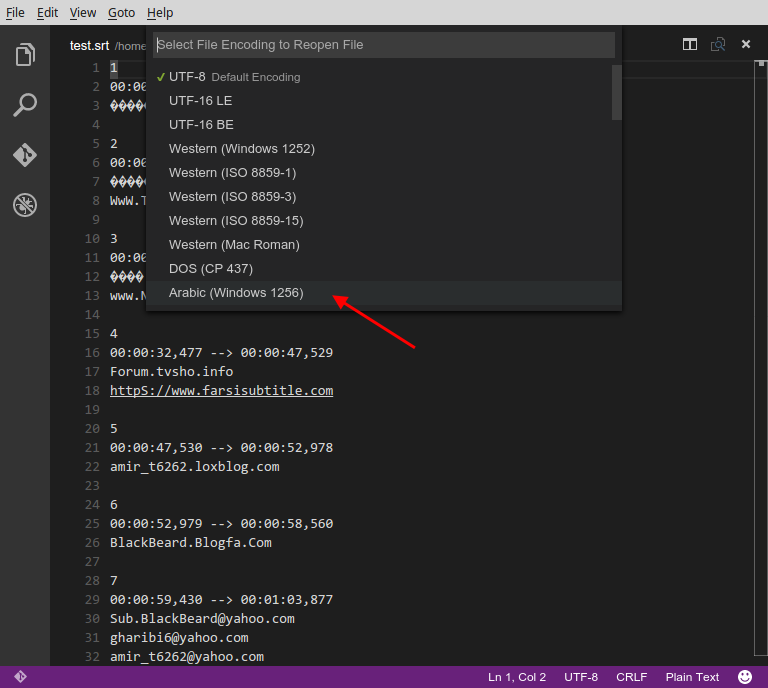 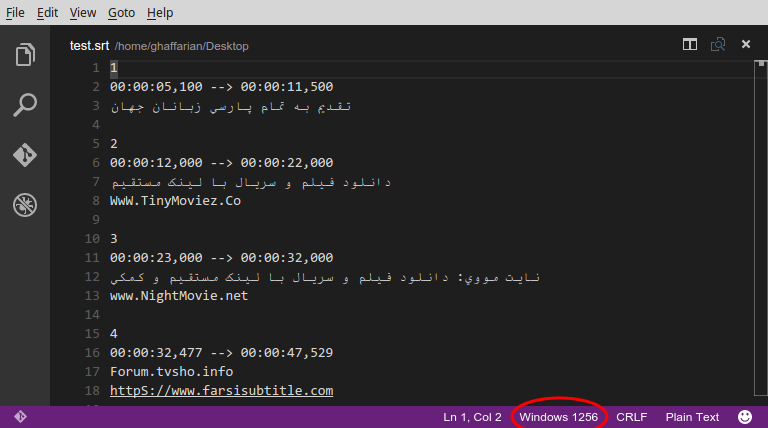 Now click the encoding button again and this time select the "Save with Encoding" option, just as below: 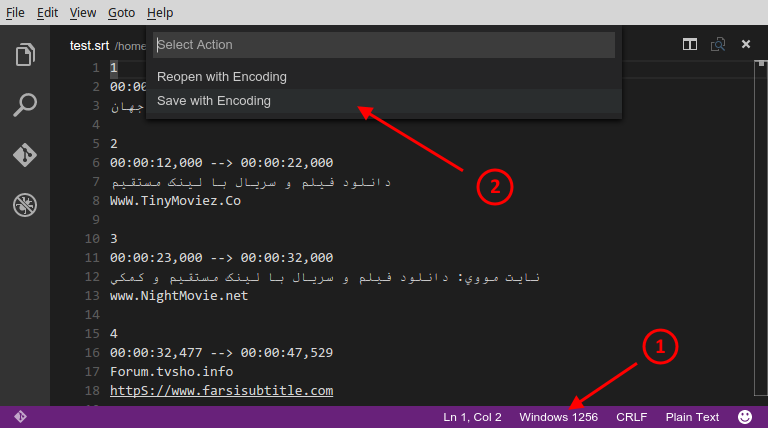 And in the new menu select the "UTF-8" option: 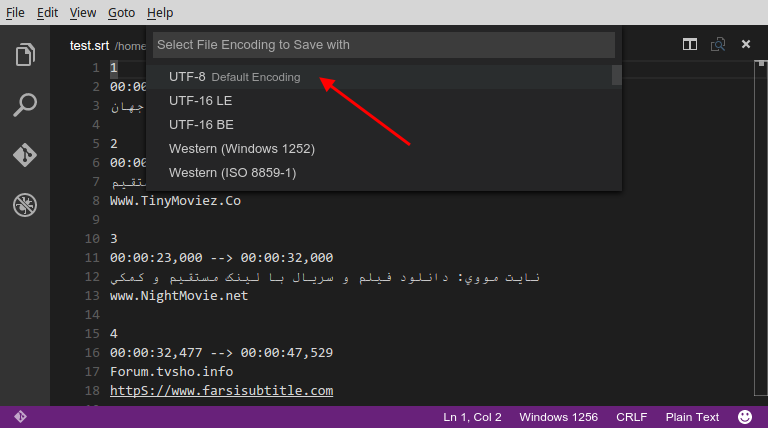 This will save the corrected file using the UTF-8 encoding: 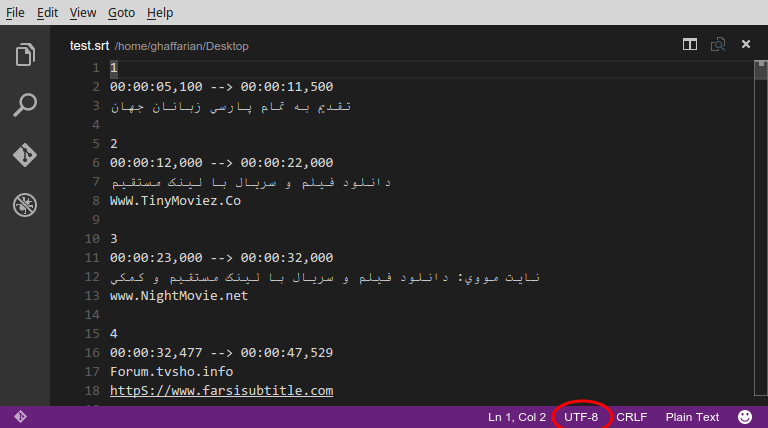 Apart from iconv, which is a very useful tool either on its own or in a script, there is a really simple solution I found trying to figure out same problem for Greek charsets (Windows-1253 + ISO-8859-7).

All you need to do is to open the text file through Gedit's "Open" dialog and not by double-clicking it. At the bottom of the dialog box there is a drop-down for Encoding, which is set to "Automatically Detected". Change it to "Windows-125x" or other suitable codeset and the text will be perfectly readable in Gedit. You can then save it using UTF-8 encoding, just to be sure you won't have the same issue again in the future...

I don't know if this works with Farsi: I use Gedit, it gives a fault with wrong encoding, and I can chose what I want to translate to UTF-8, it was just text not lit format, but here is a screenshot! 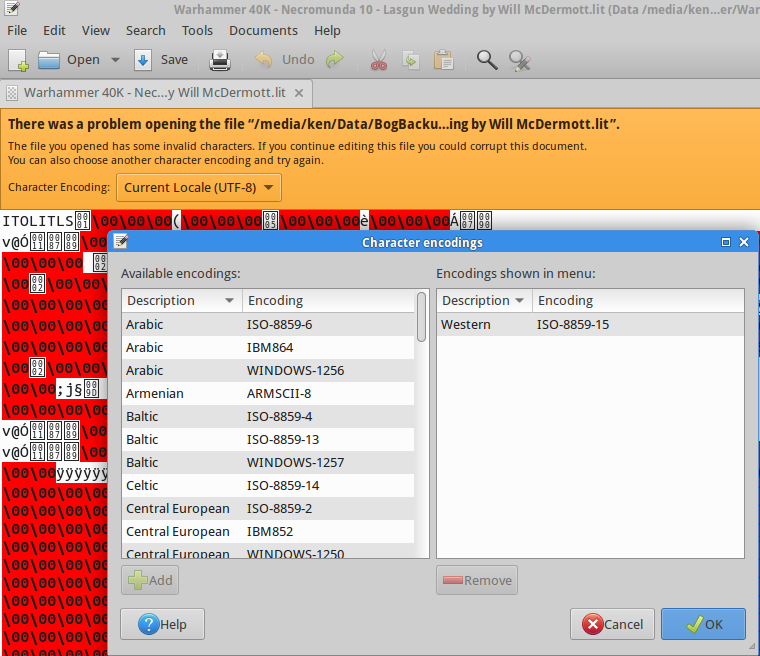 Sorry I finally got through my text files, so now they are all converted.

I loved notepad++ too, miss it still.

As a complementary solution to the problem, I have prepared a useful Bash script based on the iconv command from Incnis Mrsi's answer:

This script will try to fix the encoding of any number of files it is provided as input. Note that the files will be fixed in-place, so the contents will be overwritten.

You can use Vim to do the encoding conversion:

But this depends on Vim detecting the original encoding correctly. To make it use the correct one if it doesn't, you can do something like:

Or, to save to a different file instead of doing it in place:

Just open a file (no matter source encoding) Save As (Shift + Ctrl + S) In opened window, change Encoding to UTF-8 Hit Save and finished

15
How can I change the encoding of a subtitle file?

6
Encoding and decoding error in non-English name of compressed file
0
Change File Encoding Info
3
Cannot read filenames that are in utf8 encoding (Greek characters)
4
How to convert a text file with mixture of encodings to a single encoding?
0
tcs command to convert encoding
2
gedit weird encoding of standard text file