How to enable Esperanto typing in Trusty?

I found many pages showing how to do it enabling the Adding Esperanto Circumflexes (Supersigno) in Keyboard layout settings. But none of them works in Trusty, although it works fine in Precise.

Here one example of guide that shows up how to do it: http://zaemis.blogspot.com.br/2012/01/esperanto-accented-characters-in-linux.html

Adding Esperanto Circumflexes (Supersigno) allows you type Esperanto easily no matter which keyboard layout you are using or others stuffs. So how to activate it on Trusty?

It should be easy because many people of Esperanto community uses Linux as they share the same ideas of freedom, but they aren't advanced users (don't expect them to use a command line).

(Here is a screenshot of my Text Entry settings. The keyboard settings leads to other panel that only allows to set up key bindings. There is no Options button.) 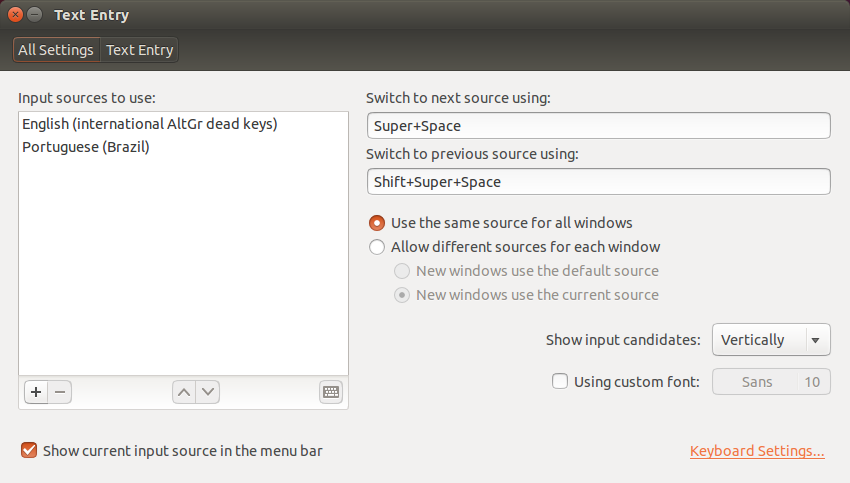 Unfortunately, I found the main problem is The Gnome removing features that lots of people use. This is one among many other disrespectful decisions to Gnome users. Because of it I moved from Unit (Gnome based) to another Windows Manager/Desktop Environment (Openbox) in another distro (BunsenLabs). There, I had to figure out how to edit the X settings to achieve this.

Although this, with this question I have in my mind regular Esperanto folks I try to introduce to Linux, that unlike me, they aren't comfortable with using terminal and editing config files. Unhappily, after Gnome developers choosing to drop users access to configure their input as they need, there is no easy way to do that after Ubuntu 14.04 without terminal hacking or installing external tweaking programs. I don't know well Linux Mint, but Cinnamon seems to preserve this feature.

Besides this, I chosen one right answer as it seems to do the job, and is something a Linux novice would be able to handle.

From the console I use:

I'm running Trusty, and found the place to set the Compose key right where David suggested: in Settings/"Text Entry"/"Keyboard Settings...."/"Text Entry"/Shortcuts/Typing (where the selections are a confusing mix of menu selections, tabs, highlighted text, selections from a list, etc). Note that is the same settings dialog that you can get via Setting/Keyboard/Shortcuts/Typing. A bit confusing....

103
How can I type accented characters like ë?
2
Can't map Esperanto characters to <kdb>Alt</kbd> Gr in Ubuntu 14.04 LTS (Trusty Tahr)

3
"Adding Esperanto circumflexes (supersigno)" option has no effect
0
Can't switch 3 languages: English-US (as base), Russian and Ukrainian. Ubuntu 14.04 Trusty (desktop:Unity)
3
14.04 Lubuntu -- Choosing Keyboard Layout on LightDM
1
Typing several foreign characters with a single keyboard layout in Ubuntu
0
How to change the default keyboard for gnome?
1
Does Linux have a US international keyboard layout exactly like the windows version?
0
My keyboard layout changes uncontrollably